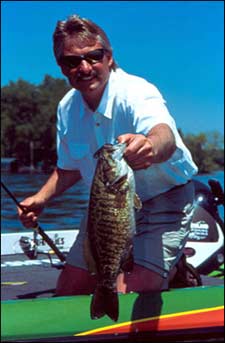 Glassing and stalking prey from over top can be acutely effective. Picture a redtail hawk, a barred owl at night, pitched atop a highline and transfixed on a rodent below. With shoulders squared and wings ready to unfold, the prodigious raptor stoops and dives. There's no struggle but only a rustle in the brush as the avian predator clutches and mounts with a meal.

In a way, ice anglers do it too. From above, through a single aperture, they stalk, battle, and gather prey.

Hovering over your quarry certainly has its advantages.

Regrettably, though, few openwater anglers attack from directly above. Bass anglers, specifically, might be the least prone to fish straight up and down. The few that do, though, take the task seriously and catch fish with others aren't.

Down south, in creek channel and Reservoir-ville, vertical jigging spoons are brandished during late fall, winter, and early spring, when bass - largemouth and smallmouth - accumulate on specific structure. The Hopkins Spoon is the most familiar version, but a few newcomers are producing flashes too. Most notable amongst them is the Northland Buck-Shot Rattle Spoon. The showy lure marries sight and sound with its vivid holographic finish and internal rattle chamber.

Disappointingly, too, in the northern states, vertical jigging is put to play even less often. Yankee anglers ignore the possibility that bass could be wallowing beneath the transom.

But such prospects are far more ordinary than you might imagine.

Bridges present the best and commonest example, too. In the spring and fall, on both lakes and reservoirs, bass migrate from zone to zone. Oftentimes, these travel routes pass through narrows and beneath bridges. This is especially true in the spring when fish leave the main lake to spawn in bays, coves, harbors, coulees, as well as backwaters off rivers.

In my experience, submerged pilings - wood or concrete - in 8 to 20 feet of water hold the most fish. In these depths, bass adhere to the supports and associated shoreline riprap. Because of this clinginess to structure, and potential for snags, vertical jigging is in order. With my rod extended - waist-high and horizontally - I release a Rapala Jigging Rap toward the bottom, pausing and jiggling intermittently along the way. Once the bait hits - if it arrives without first being engulfed - I initiate a sequence of 1 to 2 foot snaps; each followed by a freefall while I closely monitoring the line for jolts. Several snaps and falls at that depth and it's time to reel-up and sample another slice of the water column. It takes awhile to cover the full scale in deep water, too, but efforts can be rewarding, as bass habitually suspend along bridge struts.

It should be noted, too, that I mean "snaps," the sort where bubbles fly off the lure as it streaks through the water. My goal is to elicit strikes, provoke a bass to challenge the bait. And all the while I'm surveying the activity on my electronics, a Lowrance X-91 and 1040A. Running in real-time, I attentively survey the lure and how fish respond to it, as well as if there are fish around at all. Structure also shows up, including the pilings if you're in tight enough. This ability to examine the underwater world electronically is a chief attribute of vertical jigging.

The same perpendicular snapping and falling technique used near bridges works on main lakes too, especially with respect to deep rock piles and points. In autumn, bass gather on such rocky ledges, particularly in depths of 12 to 20 feet where boulders outnumber stones. Bigger is better in the realm of rocks.

Vertical jigging also plays a role in the swelter of summer. When the water's practically boiling and the shallows are slimed, bass seek refuge in the deepest, shadiest habitat available. Quite often, that pursuit leads them to swimming platforms and docks. And if the manmade structures are positioned in 4 feet of water or more, each can be addressed with a Jigging Rap.

I've encountered swimming platforms in as deep as 12 feet of water, too. That's Club Med for a bass. Those fish have, at their fin-tips, cooling shade, shelter, as well as grub in the form of panfish. The snap and freefall cadence suffices, too. Swimming the lure around the perimeter can also be productive. But in shallower terrain - under 6 feet - vertical motions are out and pitching is in. Jigging Raps are designed to yo-yo and circle, but fortuitously, they're also equipped for concise 10 and 20 foot horizontal swims.

If you grab the right stretch of shoreline, one with a serious grade and lots of planking, it's possible to go from dock to dock all afternoon without firing a single cast or cranking the outboard. It's a ball...

River dwelling fish entertain Jigging Raps as well. Logjams and resulting downstream eddies are notorious hideouts for bruiser smallmouth bass. I like to position crosswise or just downstream from the eddy and lob casts into the deeper, slower water. I'll move right in and go vertical if it's super-deep and or loaded with wood. But be prepared to lose a Rap or two; these are unforgiving environs.

On the topic of timber, let it be known that standing trees in standing water - as are common on reservoirs - can also be tackled vertically. The outside edge of flooded woodland is a favorite. With trolling motor engaged ever so slightly, I'll trace the trees while snapping and dropping. This pattern is especially effective in the summer.

For most of my bassing exploits, the W7 Jigging Rap - 2 ¾ incher - gets the nod. Traditional Silver is universally accepted; I've had favorable results with Chrome Blue as well. But if smallies are about, go to Silver/Florescent-Chartreuse. They'll knock the color off of it.

I tie direct too, leaving snaps in the tackle box; although, line twist can be minimized by factoring in a barrel-swivel about 3 feet up the line.

The line is spooled on a baitcast reel and fortified by 6 ½ foot medium action Rapala Signature Series rod; it offers good length for hooksets, a fast tip, and ample backbone.

Unexpected guests sometimes supplement the booty while vertical jigging too. Walleyes and crappies gleefully slurp Jigging Raps, so too do white bass, spotted bass, and even sharp-toothed pike. The lure's action is simply too enticing to ignore, regardless of creed and color.

I suggest you stash a handful of Buck-Shot Rattle Spoons and Jigging Raps in the boat this season. No doubt, an opportunity will arise when the fish are deep, clustered, and waiting for a gift to fall from the sky.

Scott Bonnema
Scott Bonnema is a touring bass professional who fishes tournaments and offers instructional seminars throughout the Midwest. He’s a member of the Rapala Team, and Pro Staffs of Fuji Film, Northland Tackle, Ranger Boats and Mercury.
BITS & BITES
Advertise here
Advertise here
Please take a moment to visit our sponsors. Without them we would not be here.