By Bill Schultz - April 1, 2003
I've had the good fortune of fishing the waters of Door County many times for smallmouth bass since my first fishing trip there in May of 1995. Like most who fish this wonderful resource, I try to be a good steward of the fishery and am careful with the smallies I catch, and always release.

In recent years I've seen some things that have me concerned: an invasion of round gobies, an ever-increasing population of fish-eating cormorants, more anglers who seem to be keeping their limit, and a growing number of

I caught my first, funny-looking goby in the spring of 2001, and by last summer the kids fishing off the docks at Potowatomi State Park were pulling them out one after another. Over the years I've seen cormorants, but the increase in numbers is shocking.

Yes, the majority of smallmouth bass anglers do release this bronze bomber to fight another day, but over the past couple of seasons there seem to be more than the usual number of anglers keeping bass. I've wondered if this has something to do with the lack of yellow perch in the area. My last observation is fraught with strong sentiment on both sides, and that is the proliferation of bass tournaments run out of Sturgeon Bay - everything from the 250-boat Sturgeon Bay Open to the small club tournaments.

You may agree or disagree with me on these observations depending on your point of view and your own experience. For a "Dragnet"-style "just the facts" approach, I turned to the experts to help me look at the issues I've raised.

I questioned Wisconsin Department of Natural Resource staffers Michael L. Toneys, Fisheries Biologist and Supervisor of the Lake Michigan Fisheries Team, Lakeshore Basin, and Timothy Kroeff, Fisheries Management Technician. Toneys' responsibilities are supervising the fisheries program, both inland and outlying waters, in Door, Kewaunee and Manitowoc Counties. Kroeff is the lead biologist for smallmouth bass in the outlying waters around Door County and lead biologist for assessment of the bloater chub, a commercial species, in the Wisconsin waters of Lake Michigan. 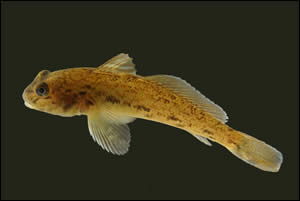 Toneys and Kroeff told me that the DNR is very aware of the explosion of the round goby population in the Sturgeon Bay area. They expect the species to continue to expand as a very unwelcome addition to the species diversity of the area. Gobies were first discovered in August of 1999 near Sunset Park. Kroeff noted, "We have documented their nest robbing ability as have researchers on Lake Erie."

During one of his underwater studies, he said, "We removed a smallmouth bass from a nest early last summer in Sturgeon Bay and it did not take long for the gobies to move in and eat eggs on the nest." Kroeff is shocked at what may be happening in the area observed, but told me he was very surprised at smallmouth reproduction in that area and impressed with the hatching success and the numbers of fry seen about a week later.

Even though Kroeff's underwater studies have shown a good hatch this year, both he and Toneys said they just don't know what to expect in the future. The goby population in Sturgeon Bay already is huge. Kroeff said, "The area I studied is infested with gobies and there is no doubt that will grow and expand in the waters of Door County."

I was surprised to learn from Kroeff that gobies can have several spawns during the summer, taking advantage of optimum water temperatures and food. He said, "Females may mature as early as one year old and males mature at three or four."

When asked if the DNR has a plan to deal with the gobies, Toneys said, "No, there's no feasible or practical control measure other than predation by other fish, etc. They are here, and here to stay." Kroeff stressed, "The most 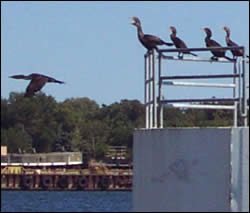 important thing we can do is try to prevent the introduction of this pest into other inland waters."

Kroeff agreed with my observations on the increasing numbers of cormorants over the last decade, noting, "They have increased not only in our area, but throughout the Great Lakes. I'm sure they do consume smallmouth bass, but at the present time I do not see them limiting smallmouth success." He did say they do consume numbers of white perch, gobies and alewives.

Toneys said, "In the future the United States Fish and Wildlife Service may allow states to do some population control of cormorants in certain areas."

Cormorants aren't a small bird. They have a 50 inch wing span, average about 27 inches in length and weigh between three and four pounds.

On my observation of more anglers keeping limits of smallies, Kroeff said, "My assessment of the smallies in the waters of Door County, is that since the mid-'90s the fish mortality has been low, and is much lower than in the '60s and '70s."

Toneys told me, "At the statewide spring 2003 Conservation Congress hearings, we are planning to have an advisory question to find out if the fishing public would like to see stricter sport fishing regulations on both smallmouth bass and northern pike on Green Bay and waters around Door County." He said the public response to these questions will heavily influence how the DNR proceeds with specific future rule change proposals.

Kroeff reminded me that, "We have already increased the size limit from none to 14 inches and if a fish is harvested at 14 inches it will have had one or two seasons to spawn." He agreed with me that "the lack of perch probably has put some added fishing pressure on smallies," but noted that they "continue to suggest catch and release as opposed to more regulations, however additional regulations are possible."

Both Toneys and Kroeff feel, even with the present harvest, this is a trophy fishery and anglers who want to harvest some fish to eat according to the present regulations have a right to do so. Toneys said, "We sometimes tend to over-regulate the fishing sector with trophy fishing regulations."

Toneys told me, "Both Tim and I have gotten comments from anglers urging us to adopt regulations similar to those for the Chequamegon Bay on Lake Superior." They feel there's a fine line between the support we've seen for more regulations and the wishes of those who want to harvest fish to eat.

Kroeff says, "I hope those who harvest fish to eat are all license holders and they follow the written regulations and also use good judgement in harvesting primarily 14- to 16-inch fish."

Toneys and Kroeff agree that tournaments are a touchy subject because participants do have a right to fish and, on a positive note, a great number of the fish that are caught are released alive. They did say that the DNR has tried to place voluntary zone restrictions on the larger tournaments and some organizers have complied. One of the primary concerns of the DNR relates to the large numbers of fish being relocated from some unique fisheries, especially on the lake.

I asked Toneys if they'd seen any injuries to smallmouth bass that had been put in a livewell and bounced across the waves for miles to a weigh-in at a tournament. He said, "We haven't seen much apparent stress or physical injuries on bass registered at tournaments in Sturgeon Bay over the past decade." Toneys pointed out that they've observed that trips in livewells seem to be much more stressful and detrimental to walleyes in the few tournaments held in recent years, with much higher mortality.

According to Kroeff, tagging studies and research suggest that relocated fish may try to swim back to the area they were captured from, but long distances no doubt affect this ability. Kroeff said, "We are hoping to have more authority on setting local tournament conditions sometime in the future if proposed legislation is passed." 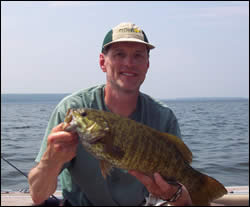 Along with studying the smallmouth bass in and around Sturgeon Bay, Kroeff enjoys fishing for them. He points out, "I have seen the smallie population come back from some real low numbers back in the '70s. Some years are better than others, but this spring was one of the best I have experienced."

He told me that we're seeing the effects of a huge 1995 year class. Since 1995 there have been disappointing year classes and some fair ones, but if his underwater observations of nesting success are a good indication, the 2002 year class may be a good one.

Toneys and Kroeff have helped shed some new light on these topics, and for that I want to thank them.

I think most of us who fish Door County can only hope that the goby and cormorant problems do not overly impact this great fishery. As a zealous catch and releaser, I personally hope at least some trophy regulations are enacted and that those who take smallies to eat take the smaller fish and release the bigger ones. The tournament debate will continue. Here too, I hope the DNR will see the wisdom of controlling these events so that they do not impact this wonderful fishery.

Bill Schultz
Bill Schultz lives in New Berlin and Sturgeon Bay, WI, and is a contributing writer for several magazines and web sites. Since catching his first smallmouth bass in 1994, he has caught and released over 26,700. His focus has been on the big waters of Green Bay in and around Sturgeon Bay, along with rivers and streams throughout Wisconsin. Catching and releasing smallies and sharing his recipe for success has become a passion for him. Bill is on the Pro Staffs for St. Croix Rods, Mercury Marine, Yar-Craft Boats, Jackson Kayaks, Bending Branches/Aqua-Bound Paddles, Kalin's, Keitech USA, RAM Mounts, Cedar Lake Sales and Malone Auto Racks/Trailers.
TRENDING DISCUSSIONS
Advertise here