By Bob Jensen - April 1, 2003
A friend just called to tell me the walleyes were going big-time on a nearby river. For the next few weeks, rivers across the Midwest will be the scenes of some superior walleye action. Of course rivers provide excellent walleye action all year, but in late winter and through the spring, action can be intense. Here's how you can catch walleyes in rivers for the next few weeks.

Just as with any time of year, the most important factor regarding walleye action is finding the fish. It is important to 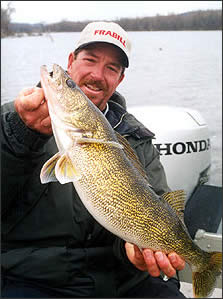 keep moving until the fish are found. Work an area thoroughly if you feel it should hold fish, but don't spend a lot of time in any particular area unless you are getting bit.

The deeper holes will hold good numbers of fish in late winter and early spring. It seems that as the water warms, the fish will move shallower. Water with some color will also encourage fish to move shallower.

As the water warms, the shallow areas will see more fish, and as they move shallower, many of them will be aggressive and willing to bite.

Expect to find hungry walleyes in areas that have small rock or sand. The best areas will be at the edge of the current.

Jigs are most popular this time of year, and for good reason. Walleyes in late winter and early spring seem to prefer jigs to almost any other presentation. Other lure types will work, but jigs will produce walleyes more consistently than any other lure.

Most walleye experts agree that at this time of year, it is very important to work the jigs slowly and right on the bottom. At other times of the year a jig can be moved a little faster and off the bottom, but right now, for the best chance of success, a jig crawling along the bottom will be most productive.

A jig with rattles will be very productive this time of year. There is usually some color in the water due to run-off, and the additional noise will help the fish find the bait. The new rattling Fire-Ball has been a great fish catcher in stained water.

Jigs that provide flash with spinners or propellers will also be productive in stained water. Thumper and Whistler jigs employ a spinner or propeller and have proven to be very effective in the spring.

Some anglers like to go with heavier than ordinary line this time of year. Due to the slow presentation right on the bottom, you may get snagged a little more often, and heavier line will allow an angler to pull more jigs out of the snags. Eight or ten pound test line of a tough variety such as Trilene XT is the choice of many river anglers.

Rivers plus jigs in the spring equal walleyes. If you live anywhere in the Midwest, somewhere close to your home, right now, there are anglers catching walleyes in rivers. You should be one of those anglers.