Ice Fishing tips - Two that will prepare you for success!

You can probably apply the old adage "an ounce of prevention is worth a pound of cure" to just about anything. When it pertains to ice fishing, it could be worth numerous pounds, of fish that is.

One of the most neglected areas of preparation is around the hole itself. Most fish that are lost, including those "trophies of a lifetime", escape back down the hole due to a lack of preparation. Most

fish that are caught come on the "first drop" or the initial offering in a fresh hole, long before most anglers are truly set up. We all get excited and want to drop a line and then "tweak it later".

Next time you set up, pay close attention to the hole before you drop your presentation down. Is the hole clean? Ice chips and chunks not only entangle your fishing line, they can also cause breakage. Make sure to skim away all of that mess and keep the hole clean and clear of obstructions.

Where is your Coleman lantern? Is your heat source too close? Could either the lantern or the heater damage the fishing line? Is your skimmer close by to assist you with the smaller fish? Is the gaff buried underneath your gear in the bottom of the Fish Trap, or is it near your free hand, ready to assist.

If your Vexilar or your Aqua- Vu is in the same hole as the one you fish out of, have a game plan ready on how you are going to remove or deal with the electronics when you "hook up" on a fish. Better yet, practice a few times by holding the rod with one hand and removing the transducer or camera lens with the other. After a few practices, it will become a natural movement.

Tip # 2 When a perfect plan fails - leave room to bail

As anglers we've all experienced at least some degree of failure. Especially when it comes to that perfect "fool proof" hot bite. You know the one - "get your tail up here, they are snappin' like crazy" 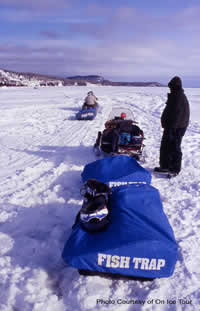 and when you're on that pond two days later your same friend looks at you and says: "You should have been here yesterday"

These situations leave most anglers in two positions: Position one is "toast" - rejected and dejected they will usually stick it out or wonder around punching a few holes until they get discouraged enough to go home. Position two is "chicken" and not as in afraid, but as in "chicken with it's head cut off" - scrambling around last minute trying to call everyone they know to salvage the last two or three hours of the day. Most of the time all that you end up with is a mediocre bite at best and a few used up favors from your contacts.

There is a third position to be in: Prepared. It's an interesting concept but not as difficult as it sounds. With a little advanced planning and scouting the astute angler with at least one if not two "bail out bites" will come out the winner. Here's how:

Don't be satisfied with that first bit of information.
Ask the source what else is going on in the immediate area. If crappies or walleyes are hot in the early morning and late evening low light periods, are there any bluegills or perch snappin' during the day? Are there any other bites in the immediate area? If you are planning on fishing a large lake, is there a small lake option or vice versa.

Don't be satisfied with that first source of information.
OK - so your buddy wants to hang out with you - it's a proven fact that at times a friend will "embellish the bite" in order to get you up into his neck of the woods. (Most times they just want to show off the new paneling in the basement! It's better to "catch up" with an old friend by showing them the new dark out interiors of your Fish Trap or Clam Shelter!) Call around to other area contacts, bait stores and resorts (especially those with access) and find out what else is going on. Paneling is a lot cooler when you're enjoying it in the evening - exhausted from wailing on the fish!

Don't be satisfied with the bite your on.
Especially if it is mediocre at best. There have been countless times that the On Ice Tour has been on a slow bite (one that most anglers would have been content with) only to fire up the StrikeMaster LazerMag, Swiss cheese the ice, and run into the mother lode. Other times, an angler needs to realize that the bite they're on is just not working, and to "pack and drag" to the "bail out bite".

Don't be satisfied with "some" bait and "some" tackle.
Take the "big four" in bait: minnows, wax worms, maggots and an assortment of PowerBait. As far as minnows are concerned, take a variety of shiners, fatheads and suckers in different sizes. You can keep them separated and alive in small Coleman "six pack" style coolers. If you call and they're catchin' 'em on red Techni-Glo Frostees and pink Super-Glo Doodle Bugs, go to your local tackle shop and load up! Oftentimes "hot baits" get "pegged" or bought out at the location of the bite.

Plan your work and work your plan.
Before you leave, put together a simple three-step plan: Step one is the starting bite. Step two is "bail out bite" #1 and Step three is the "last bite" - for when all else fails. Not only can these "bail out bites" save the day when the original plan bites the dust, but in some cases, an angler can hit a "tri-fecta" - Those special days when you get into numbers of at least three different species of fish. A wise man once said: "No plan, is a plan for failure".

Preparation - It could be the difference between success and failure on your next outing. An ounce of preparation can sometimes result in "pounds" of the cure.

On Ice Tour Pro Staff
On Ice Tour (a division of WildSide Diversified), co-founded by Chip Leer and Tommy Skarlis, is an extensive effort focusing on generating excitement for the great sport of ice fishing. For more articles, fishing tips, info on the latest and greatest ice gear or a schedule of On Ice Tour Pro Staff appearances, log onto www.onicetour.com.
TRENDING DISCUSSIONS
Advertise here