By On Ice Tour Pro Staff - February 1, 2003
Give an angler the best equipment available today, and you've got an angler with the means to catch a lot of fish. Give that same angler the knowledge and creativity to get the most out of those tools in a variety of situations, and you've got an angler who is always the envy of everyone else on the ice. Once upon a time, hard-water structure fishing was a trial-and-error adventure that consisted of lining up shoreline landmarks or attempting to follow obvious shoreline structure out into a lake or reservoir. Today's electronics have changed all that. High-definition sonar, underwater cameras and global positioning units have taken much of the guesswork out of ice fishing, and opened a whole new world to anglers.

"Now the whole water column is at your disposal, from shoreline to shoreline," says professional angler Tommy Skarlis, co-founder of On-Ice Tour. "The trick is to use your electronics in unison to really break down and understand a certain situation. GPS, sonar and underwater cameras are great complements to one another."

The benefits of GPS systems are obvious. Primarily, they lead an angler to specific target areas. Using GPS over hard water, explains On-Ice co-founder Chip Leer, can be even more valuable than its applications during the open-water season. "The beauty of GPS, if you look at summer fishing versus winter fishing, is that you can pick spots apart better through the ice. You can refine your existing GPS coordinates and put new marks on those exact spots where you want to be."

"We've all seen situations where one corner of the ice fishing shelter is producing all the fish. There's usually something important there, whether it's the tip of a rock finger or a small hump." Sonar and underwater cameras go hand-in-hand for both ice-angling enthusiasts. Several companies make hand-held sonar units that help anglers find a particular depth or piece of structure when GPS isn't an option. StrikeMaster's PolarVision unit is about the size of a flashlight. "It helps you shoot quickly through the ice, even in the worst ice conditions," says Skarlis. "You can use your regular sonar unit for that, but it's a lot more cumbersome." To facilitate the use of a PolarVision unit, Leer keeps a small squirt bottle of water in his pocket that he uses to efficiently squirt on the ice before taking a reading. "Something else you can do is put the transducer into a plastic bag filled with water or a non-freezable liquid," Leer adds. "You eliminate the air and tape the bag shut. Then you can simply place that on the ice to get a reading."

From there, the On-Ice experts turn to their Vexilar FL-18 units to further evaluate the world beneath them. The first trick, notes Leer, is setting the "gain" at the proper level. "You want to turn it up just enough to see your bait," he explains. "My experience has been that if you run it too high, the targets become thicker and wider bands that can be confusing. There might be two fish down there, but it looks like a big blob. "You need size definition. Being able to separate fish and separate your jig from the fish can help you read how the fish are responding to your jigging technique." The FL-18 offers a dual-screen option that allows anglers to view the entire column and a target zone at the same time. That can be helpful when fish suddenly rise up in the column at some point during the day. 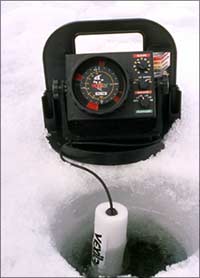 Dual transducer cones are another advantage. "You can use the narrower beam in deeper water and the wider beam in shallower water," says Leer. "Cone angle can make a big difference in determining how far that fish is away from you and your bait, and how far you are able to pull them." Along that same line, attaching the transducer to a shaft turns it into a side-viewing unit that might point out fish just outside the cone angle.

Sometimes, current becomes a factor that must be dealt with. Leer recalls an outing on the Saginaw River when the current was pulling his jigging spoon outside the cone angle. "It was one of those days when, if it wasn't for electronics, we never would have caught a fish," he relates. "We had to drill a second hole outside and downstream of our Fish Trap shelter for the transducer," he relates. "Then we could see what our jigging spoons were doing, and we found out that the walleyes were following them, but wouldn't hit until they were four feet below the ice. "We caught 27 or 28 walleyes that night, and we never caught one fish until the bait was four feet below the ice. You had to pull it up and tease them, pull it up and tease them ... Finally, at that four-foot mark they had to make a decision.

"That was a very educational couple of days of fishing." Skarlis says learning what to read into the band that identifies the bottom on sonar units is equally valuable. The intensity of the band not only tells the angler whether it's a hard or soft bottom. "Sometimes, you can be on a lip or a break going from shallow water to deep water, and you can read that on your sonar by the width and intensity of the band," he notes. "That can be critical to finding the active fish."

Underwater cameras bring everything into focus. Sonar units allow the angler to watch fish approach a lure, but they don't always provide a clear understanding of what's happening. "If I'm catching fish and I want to know why, I can use the camera to identify the bottom content. I can use it to show me exactly what species are down there," says Skarlis. "If I'm fishing around weeds, the camera will let me know if they are dead, brown weeds the fish don't like or if they're the green weeds fish seem to relate to."

Equally important, the underwater camera shows exactly what's is, or isn't, below the angler. "You don't want to fish all day for what you think are bluegills, and they turn out to be bullheads," adds Skarlis. "It's the same thing with size. Why spend your time fishing in an area full of small perch when you could be moving around looking for the jumbos?" 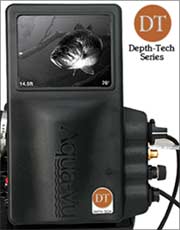 The most intriguing and often the most valuable aspect is watching the drama of a hungry fish as it encounters an angler's bait. "I've seen a lot of instances where you'd wait until the two lines on the FL-18 come together, but you couldn't feel the bite," Skarlis relates. "With a camera, you can watch the lure disappear into the fish's mouth. I had a bluegill bite last year where that was happening. I put the Aqua-Vu down there and saw that the fish were either grabbing my Fat Boy jig by the head, or just grabbing the tip of the Power Bait. "Once I could visibly see the hook go into the fish's mouth, I started hooking up with a lot more fish. You could also tell when a fish just picked off the bait. You didn't have to reel it all the way up to tell."

Sometimes, different jigging techniques trigger bites. The camera allows an angler to see how fish respond to various approaches. Leer said it can be fun to record an outing and study it later. "You can hook most of them up to a VCR or a digital recorder," he explained. "You can replay and study your jigging techniques or show them to somebody else. It's kind of like a football team reviewing game films on Monday."

Leer also appreciates the advances in technology that have followed underwater cameras onto the ice-fishing scene. "It used to be that everyone got a flasher before they'd get a camera," he noted. "Now I think a camera has more appeal to a lot of anglers, especially those who fish as a family. The Aqua-Vu has accessories that tell you how deep the lens is, what direction you are looking and what the water temperature is. Insert the lens cable into the slot in the Frontview/Downview fin and you get a great look at what's directly below your hole. You can buy a 10-inch magnifier, too, that allows multiple people to look at the screen at the same time." Leer said another advantage to underwater cameras is their ability to show what's happening from several angles. "You can look out to the sides of the hole or get an overhead view," he explained. "There's an accessory called the Ice Pod which holds the lens securely in one particular direction. Simply rotate the Ice Pod to look in different directions. All these toys make it a lot of fun" Acquiring the right electronics will definitely make anyone a better ice angler. Learning the tricks of the trade will advance an angler to a point that will leave the fish with no place to hide.

On Ice Tour Pro Staff
On Ice Tour (a division of WildSide Diversified), co-founded by Chip Leer and Tommy Skarlis, is an extensive effort focusing on generating excitement for the great sport of ice fishing. For more articles, fishing tips, info on the latest and greatest ice gear or a schedule of On Ice Tour Pro Staff appearances, log onto www.onicetour.com.
BITS & BITES
Advertise here