By On Ice Tour Pro Staff - February 1, 2003
We outdoors types are fond of big things. We like big trucks and boats. Our boots are big and many of us hunt for big animals. When it comes to fishing, well, bigger is also usually better: Musky, pike and largemouth? They're all pretty big, or can be. Which is why it's so interesting that winter crappie fishing is such a phenomenon. Big they're not. Crappie average ten inches and usually weigh less than a pound. 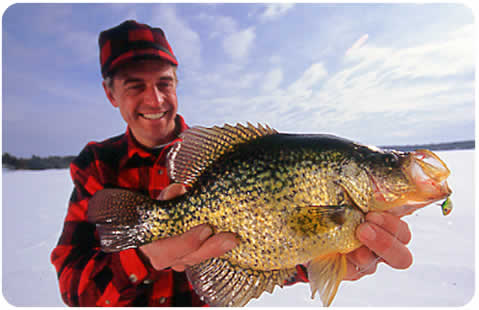 A 14-inch crappie is usually considered a monster. Crappie is a goofy name. What's up with that? They do, however, eat very well. In fact, I'd put them ahead of perch, bluegill and (gasp) walleye. So perhaps it's ultimately our big appetites that have really won somany of us to the side of crappie. Fishing for crappie is not difficult, but there are a few tricks that will help put more fish in your Trap this winter.

Crappie fishing and buying real estate are all about the same thing: location; location; location. Choosing the right lake or pond to fish (at the right time) is simply critical. But what do you look for? The classic "natural" crappie lake - with a mix of rock, weed, sand and reasonably deep water - is not always the best choice. Fishing for crappie in natural lakes tends to be spotty. There are often prolonged periods of inactivity, often due to year class strength, the availability of forage and oxygen levels.

Winter crappies in natural lakes are typically found in 15 to 30 feet of water but they can and will go much deeper. Sabaskong Bay, on Lake of the Woods, is a favorite winter crappie hang out and a popular destination for many Minnesota and Dakota based anglers. Those Sabaskong fish like to suspend over deep water, and can be spotted on a flasher holding 4 to 8 feet off bottom over 40 feet. Once the crappies are located, anglers move their shacks right over them and stay there for weeks.

There may be no species of fish better suited for the use of electronics through the ice than crappie. Because suspended crappies are oftentimes the biters, you really need to have a set of eyes under the water telling you precisely were the fish are. If you fish below a school of crappie, they'll rarely bite. But when you know where they are, you can tease them into striking by pulling the bait up above them and then dropping it back down. Like a kid, the crappie doesn't like when an easy snack is pulled away from its nose. It's a game of cat and mouse that is both

enjoyable and effective but requires the use of a sonar unit to carry out properly. When searching for crappies, a four-color flasher like the Vexilar FL-8 is one of the modern ice angler's best friend and tool for the job. It can show you depth, fish, your lure, bottom composition, and structure with incredible accuracy. When you get really good with one, you can anticipate the strike of a crappie moments before you feel it.

Another important, fish locating tool that should be included in every serious crappie angler's arsenal is an underwater camera. For suspended fish especially, Aqua Vu's DT series teamed with an Ice Pod is the ticket. With Depth-Tech and Direct-Tech, the camera gives the angler a digital read-out of how deep the camera is and in which direction it is looking, thus pinpointing the location of the fish. Sink a few holes, set up the Ice Pod and drop the camera down. With a twist of the cable you can rotate the lens until you locate suspended fish. Then it's as easy as drilling on top of them and dropping a lure down to the depth that they're at. 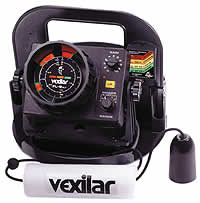 When the suspended crappies turn off, it's often the bottom dwellers that bite, and fishing right on bottom is the way to go. In this situation using a flasher with a bottom zoom feature to reveal these bottom huggers, such as Vexilar's FL-18, can really make a difference.

Dark water flowages and reservoirs often have excellent crappie populations and more consistent action than natural lakes. One of the key areas in a flowage is flooded or drowned timber. Wood laden spots are crappie magnets, attracting aggressive crappies all year.

In some flowages, especially where time has depleted the timber, anglers have sunk old Christmas trees or brush piles to create or rejuvenate crappie-holding structure. Crappie holding flowages are not created equal, however. Smaller flowages have fewer fish and can be easily "fished down" ( a fancy term for pulling a pile of fish, and eventually disseminating the school) by persistent anglers. Huge flowages of 5,000 acres or better are more difficult for crappie anglers to crack and can be affected adversely by water draw down periods, turbidity and shaky ice thickness. The in-between flowages of 1,000 or 2,000 acres are perfect for crappie fishing and generally hold excellent numbers of fish with the chance at the occasional slab. Small bodies of water like ponds, sloughs, river backwaters and small lakes are especially good crappie fishing spots at first ice. These small waters can get safe ice as early as the middle of November, providing the keen angler good action when the larger lakes are still fluid. Most ponds are rich with food and weed, and this provides the possibility of big fish in a small area. Look for the deepest water in a small lake or pond and then work from there. Small waters tend to become more difficult to fish as the winter wears on due to oxygen depletion.

Crappies are relatively small fish, so it's wise to use light tackle. There are a variety of good light-action ice fishing rods out there, but the best of the factory sticks are the Berkley Dave Genz Signature Lightning Rods. The 28 inch light action Genz rod is perfect for crappie, while the 29-inch will work, and can do double duty as a light walleye rod. Join either rod with a small spinning reel like the Abu-Garcia Agenda and spool it up with a limp, 3 or 4-pound test monofilament with low visability, such as Berkley Trilene Micro-Ice line.

If you're chasing slabs in deeper and/or wood-infested water, where lines need smaller diameters, more sensitivity and the strength to pull lures from the snags; you might want to consider using one of the new superlines such as Berkely's Fireline Micro Ice as your main connection. If the crappies are being fickle, tie a barrel swivel on the main line and then attach a two-foot section of 4 to 10 pound test Berkley Vanish. The fluorocarbon line is virtually invisible to fish and will increase the number of bites.

Winter crappie fishing is primarily a jigging game. The best crappie jigs are those that ride horizontally and imitate minnows. Great choices are: Lindy's Techni-Glo Genz Worm and Fat Boys and Northland's Fire Eye Minnow and 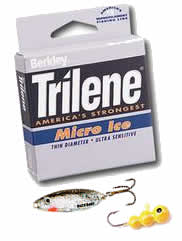 Forage Minnow Fry in Super-Glo colors. Your jig collection should range from size 2 to size 8, but you can go as small as size 10 for finicky fish.

For baiting, add a couple wax worms or Euro larvae (colored maggots) to the lure. At times a 1-inch white Power Grub will be all you need to do the trick. Speaking of tricks, try one I learned from my son Austin; cover the shank of the hook with Berkley Power Wigglers or Crappie Nibbles, then tail hook a couple of wax worms or euro larvae for a very tempting presentation that Austin calls: "double power"! This technique works well with verticle riding lures such as Northland's Jiggle Bug or Lindy's Frostee Jig.

Crappie will also hit noisy jigging spoons like the Lindy Rattl'r Spoon and Northland's Buck-Shot Rattle Spoon in 1/16 to 1/4 ounce sizes. The addition of a minnow head to the treble will increase the number of strikes. Since you can fish two lines, try dead sticking a small minnow on a single hook and fishing it close to the bottom. Dead sticking employs a very whippy rod placed in a holder. Watch for the tip to signal a strike, wait for the rod to slightly load up and then set the hook and reel them in. Most of my largest crappies have come on a dead stick. Don't forget that crappies love lures that really glow. Blast your glow jigs and spoons with a Lindy Tazer or a Northland Glo Buster to really get it beaming.

Don't jig aggressively for crappie; just wiggle your bait lightly in front of the fish. Tapping your index finger on the rod blank will provide a subtle vibration to the jig. Crappie bites will be relatively soft and are sometimes almost imperceptible. That's were a slip float comes in. A slip float allows you to suspend a lure in deep water, but more importantly, it signals even the wimpiest bite. I prefer the Northland Lite Bite or Thill's Mini-Stealth, Center Sliders and Ice'n Fly Special floats for this type of presentation.

If you're on a school of "Gulpers" (On Ice Terminology for fish that are chompin') the float will plunge on the strike. Other times, the float will jiggle, dip slightly or even move upwards in the water (also known as: a lift bite). All these actions register a strike. Lift softly on the rod or better yet, just reel up on the fish and keep reeling until it's out of the hole.

Crappie may be the all round best winter sport fish. They bite well all season long and they're one of the easiest fish to catch for anglers of all ages. Because they are forage fish that propagate and replenish themselves quickly, at the end of a long day on the ice, you can keep enough for a fresh family feed without any qualms. Fry them up crispy with some potatoes and a side order of beans and you will be hooked for life. That's a piping hot cure for the curious crappie fever.

On Ice Tour Pro Staff
Editors Note: Gord Ellis is a freelance writer from Thunder Bay Ontario and pro-staff member for the On Ice Tour.
On Ice Tour (a division of WildSide Diversified), co-founded by Chip Leer and Tommy Skarlis, is an extensive effort focusing on generating excitement for the great sport of ice fishing. For more articles, fishing tips, info on the latest and greatest ice gear or a schedule of On Ice Tour Pro Staff appearances, log onto www.onicetour.com.
TRENDING DISCUSSIONS
Advertise here
Advertise here
Please take a moment to visit our sponsors. Without them we would not be here.