By Calvin Christopher - February 1, 2003
It's politically correct and nearly clichéd, the term "multitasking". In the hustle and bustle work-world it means 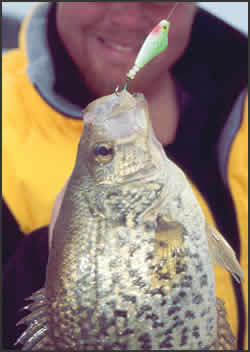 engaging two jobs at once, say tooling widgets and managing idiots in chorus – or at home, changing a diaper while disciplining other offspring. On the ice, multitasking suggests catching one species while, well, catching another. And the best example involves walleyes and perch.

Genetically linked, the two species favor similar environments. Seldom are these mutual habitations small either. It's rare to find a pintsized lake that supports jumbo perch, let alone colonies of respectable perch and walleyes. So I fish big lakes, like Minnesota's Lake Mille Lacs where walleyes grow thick and long and perch have foreheads. And this dual presence certainly transpires on other large waters too; Devils Lake, Lake Michigan, Lake Erie, and Lake Champlain, to name a few.

An ice fishing friend and mentor of mine, Milt Hegland, used to say, "To catch walleyes, you have to catch some perch, sometimes eelpout too."

I've adopted this notion and developed it into my own philosophy: "Fish for perch, big perch, and you'll catch some walleyes."

Kick it around. It makes sense.

So let's look at some high percentage spots for multitasking, assuming, of course, you've already secured a body of water. My best spots involve transitions, both deep and shallow, but always a changeover from one bottom-type to another.

Gravel bars provide an outstanding example. The bar – elevated and hardened gravel – typically dips and merges with a softer basin. The amalgamation of features invites both walleyes and perch. Walleyes, the dominant predators, hit the food shelf – gravel bar – and breakline while jumbos relate more to the seam and basin, grubbing for larval insects and bloodworms. At times, the actual point of transition – our seam – puts you in contact with both species.

Truthfully, this oversimplifies the situation, because perch can certainly range across the crown and walleyes often hang off the bar, but at least you're getting a feel for "shared structures".

The juncture where a midlake rock reef greets a deep flat or basin also creates a favorable setting, so too does the base of large shoreline bar as it meanders away from a point. In essence, you have a merging of environments, which affords multiple species opportunity to coexist, sometimes harmoniously, like in the case of big perch and walleyes, or rancorously, as with perch and pike.

Questing for such prized locations requires some labor. Mapping, drilling, graphing, and GPS configuring are all part of the game. You'll need a portable flasher to see the changes in depth, and equally as important, bottom content transitions. Bright, wide return signals signifying hardness while a thin and dim mark tells me that I've reached a softer bottom. On that occasion I'll lay down a GPS waypoint, even before marking or catching a single fish.

Drill a lot and jig a lot. Invariably, my searches begin with a jigging spoon, typically a 1/8th ounce Shearwater Thumper tipped with a minnow head. When it's bright, I rely on plated gold and silver models, and turn to glow green or blue under cloudy skies and at dawn and dusk.

Oftentimes, that's all the lure-tinkering needed, but not always. When the flasher reveals fish but nobody's on the take, downsizing is in order. I'll drop to a smaller 1/16th ounce Thumper and cover it with maggots or waxies instead of a minnow. Trust me, walleyes eat grubs.

Still nothing? Time to fiddle with colors and get a second line down, a supplementary setline. The backup package consists of a float, matched amount of shot, single hook, and a small minnow, usually a small shiner. Jigging calls in the active fish and the lone minnow caters to fish in whatever mood they are in. And quite often, my biggest perch of the day fall victim to a plain hook and minnow. They seem to prefer the natural presentation.

But I'm not always willing to hunker over two lines and sit idle. It gets quite monotonous at times. Gotta keep moving, searching for active fish. So I need a presentation that's mobile and appeals to both lethargic and energetic fish. Solution: A dropline. Rigged manually, a dropline consists of a de-clawed jigging spoon, one that's had its treble hook removed, but not the split-ring. To the ring, a short segment of monofilament or fluorocarbon line – 2 to 6 inch – is tied in. And lastly, a simple hook or small lure is attached to the open, loose end, to which a whole minnow, minnow head, or waxies are added. The spoon provides attraction while the petite offering caters to walleyes and perch of all hunger levels. Trouble is that droplines are buggers to compose on the ice, especially with numbed hands. Good luck.

A solution is at hand, though: The Shearwater Double Trouble. Prepackaged, this dropline system brings it all together. The spoon part is "line through"; meaning the main spool is fed through a hallowed chamber in the hook-less spoon. From there, continue threading the line through the beads and then tie directly to a color-matched treble, all of which are included. Add more beads; swap the treble for jig or single hook; dress it with live bait or dead bait. You decide.

Droplines account for more and more of my catches each year. And it goes beyond walleyes and perch. Outfitted properly – downsizing – droplines perform wonderfully on crappies. A friend of mine, outdoor writer Noel Vick fishes them regularly for hardwater panfish.

"Droplines allow me to present baits, even tiny ones, to fish at any depth," says Vick. "For instance, I can jig for bluegills in 20 or 30 feet with a plain hook and maggots when I have the weight of a 1/8th or ¼ ounce spoon to deliver the goods."

"I also prefer the heavier load or feel of a spoon versus operating with just the weight of a small lure, regardless of species."

So now you know the ultimate tandem – walleyes and perch – and the ultimate ice fishing weapon – the dropline. This winter, don't confine yourself to single species angling, and most definitely, make plans to experiment with dropline techniques.

Calvin Christopher
Editors Note: To learn more about Shearwater Tackle's lineup of winter and summer products, go to www.shearwaterfishing.com, or call (763) 754-2139 for a catalog and or dealer locations.
TRENDING DISCUSSIONS
Advertise here
Advertise here
Please take a moment to visit our sponsors. Without them we would not be here.