The Preservation of Life 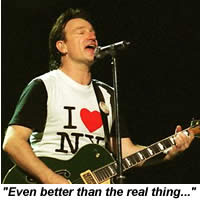 The popular rock band U2 dared to write and perform a song titled, "Even Better than the Real Thing." Obviously, Bono - the quartet's eclectic front-man - intended the ditty for some drop-dead gorgeous maiden; certainly not ice fishing paraphernalia.

But unlike rock and roll, in the icy world of bait buckets and jiggle sticks, nothing's better than the real thing.*

Now don't bother skimming to the bottom of the story looking for an asterisk and explanation, because we'll clear the matter straight away. To explicate, nothing's better than live bait, so long as it's presented properly.

Unadulterated, live bait, be it minnows or maggots, needs no assistance to tempt fish. We're the ones who muck it up, sometimes, seemingly, going out of our way to ruin a good thing. We grossly mismatch hook size to bait; incorporate bobbers that are far too large and buoyant; thread bait on so haphazardly that even less discriminate species like pike raise an eyebrow.

So it's match the hatch this, match the hatch that. We're all sick of trout fishing's snub axiom, aren't we? But notwithstanding its triteness, the saying warrants merit, especially beneath the ice where water often demonstrates looking glass qualities.

Clarity is one issue, lethargy another. Icy water retards the activities of most freshwater fishes. Some are less affected than others, i.e. trout and whitefish, but none are foraging and metabolizing at high rates.

And when clarity is combined with lethargy the sum is scrutiny. Fish move slower, see better, and turn decidedly analytical. They approach bait with the inquisitiveness of a laboratory scientist, thoroughly glassing the subject matter, in this case, a minnow or maggot.

So in consideration of the challenging atmosphere we fish, it's sensible to employ live bait, the real McCoy. In the

summer, when fish are hotter and water's darker, an all-artificials approach is reasonable, particularly when pursuing temperate fishes like bass and bluegills. But now, in the winter, it's nearly impossible to prosper without bait. Although at times, certain swimming and flash lures can be fished without accompaniment.

Assuming that live bait is in order, the obvious next move is to select varieties of edibles - not matching the hatch but matching the species: An assortment of minnows for walleyes, bass, and northern pike; minnows and maggots for panfish, including bluegills and crappies, as well as perch; minnows - live and dead - for lakers; minnows and grubs for stream-going trout, such as browns and brookies.

Sizing bait to the bite is equally as crucial. "They won't hit the wrong size," says Northland Tackle Pro Brian "Bro" Brosdahl. "Having too large a presentation is the worst offense. Fish will either ignore it completely or just peck away at it and never get hooked."

For this expressed reason, Bro carries an assortment of live bait. Experience has taught him to arrive prepared for wide-ranging fish tempers and appetites. "I can speculate about what they'll want, but fish are as unpredictable as they are consistent."

For example, when targeting walleyes, Bro totes both minnows and grubs. (Yes grubs. Ice anglers have come to realize that walleyes will slurp waxies and maggots in times when minnows go unnoticed.)

"I travel with at least a couple different types of minnows too," says Bro. "Shiners are great for float and bare hook presentations, not to mention deadsticking. But I bring fatheads or rainbows for jigging. Sometimes, it's a smaller fathead beneath a float that flips their switch. Sometimes it's a ball of maggots on a tiny jigging spoon.

"You just can never tell."

Beyond offering the right variety and size of minnow, the overall 'plate presentation' must also have appeal. That means transporting the bait to a precise depth with the right look. And that look comes in many forms.

To really appreciate this notion of bait-aesthetics, conventional thinking must be altered. Instead of considering live bait an ornament or dressing for a lure, like a minnow head on a spoon, one must think of the bait as the primary component and everything else - lure and additives - an accessory to it.

A slip-float system provides the best illustration. Let's pick on walleyes again. Imagine the goal is to deliver a medium golden shiner a foot from the bottom. It's quite deep, maxing at 20-feet, and the water wears a tannic hue. So you'll want to combine realism to ignite the strike with magnetism, the power to summon fish.

A #6 bait-holding hook notched just behind and beneath the dorsal fin yields a natural look with an unobtrusive but loaded hooking capacity. Depending on actual minnow size and overall fish aggressiveness, you might upsize to a #4 or downsize to a #8.

Said surgical-hooking permits the minnow to swim freely and appear natural. Those are attributes at short range, when a walleye's deciding whether to eat or pass. But to attract fish in deep and dark water, accentuation is in order. 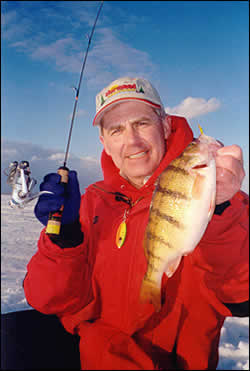 somewhere. In the case of bobber fishing and deadsticking, he expects glow to draw fish in, but all the while not dissuade potential takers at close range either.

"Sometimes, the glow and bait can't be one. It's overkill. So to get the best of both worlds, I put a little glow on the line, just above the hook," says Bro.

Bro pinches the suitable amount of Northland Hot-Spot Split Shot - glow version - 2 to 3 inches above the hook. He's taken the weight, which normally has no visual appeal, and made it the attractor. And the garnishment has no influence on the minnow's physical appeal.

A similar but even more intense effect is imparted with a Northland Fire-Light Glow Stick. Bro installs one of the miniature Kailume-powered glow sticks between two shot. (The sticks are packaged with a rubber grommet that both threads onto the line and holds the tiny torch.)

Live bait enhancement can also be achieved audibly. With the same shot in place, but spaced ever so slightly, Bro will pin between them a Northland Buck-Shot Rattle Bead. The rattling bead broadcasts when the minnow swims violently or the rig is jigged. And again, the appearance of the bait is unadulterated.

The combinations and applications are endless, restricted only by our mind's eye. The ultimate purpose, regardless of the species at hand, is to tender a presentation that attracts attention but at the same instance maintains its natural zeal. And in 2003, with tools unimaginable, it's simpler than ever before to deliver bait, draw attention, and dupe fish in unison.

John Peterson
Editors Note: This article was written in conjunction with Noel Vick
John Peterson is the President Northland Fishing Tackle. John has been fishing for over 40 years, and has been active in many of sport fishing tournamant and promotions throughout the US and Canada. He won the prestigious '96 Professional Walleye Trail tournament on Lake of the Woods, and is a six time PWT championship Qualifier. John was a past Muskie, Inc. tournament winner, and top ten finisher on the Minnesota State B.A.S.S. championship.
TRENDING DISCUSSIONS
Advertise here
Advertise here
Please take a moment to visit our sponsors. Without them we would not be here.