By Dan Anderson - February 1, 2001
For maximum success, there are four fishing styles that should be used throughout a winter season. They are jigging with an ice rod, tip-up fishing, fishing out of a shanty, and remote monitoring. An angler on ice is equipped for and will use all through a season, while an ice fisherman only utilizes one or two of these styles. An angler on ice selects a style during advance planning and one based upon the species they are fishing, along with physical and environmental factors. The physical and environmental factors weighed include the time of the ice fishing season, the body of water they are going on, and the weather they are facing for a specific outing. This strategy leads to more success and enjoyment as the angler on ice is not hindered by weather, limited lake access, or varying ice and snow conditions. Let's take a look at each method.

In previous issues Part one explained the Jigging with an Ice Rod style and Part two covered the Tip Up Fishing style. In this article we will examine the Shanty Fishing style. Part four will detail the Remote Monitoring style.

Shanty Fishing
Portable shanties (fish house) can be used with either the jigging or tip up styles of ice fishing. Equipped with one of 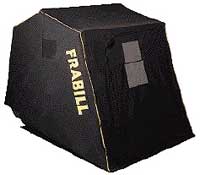 these, an angler on ice, can fish in colder or snowier conditions. The combination sled/shanty allows you to move frequently with ease. This type of fish house is available in one or two person size and stand-up or sit-down only models.

A number of states allow for the use of permanent shanties. Permanent shanties run small through large in size. Some are only 6'x8', others go as large as 8'x24' or even bigger. They can be sparsely equipped with just a heater or elaborately outfitted with kitchens, portable potty, LP lights, dining tables, beds, and TV.

Ice fishermen, versus anglers on ice, have less than desirable results using these because they generally leave it at the same spot for an entire season. Furthermore, many ice fishermen seem to be chained to the shanty, as neither the shanty nor fishermen move with the changes in fish patterns. This practice truly limits their success.

An angler on ice thinks of the permanent shanty as a base camp. They use it for shelter, sleeping, cooking, supply storage, and limited amounts of fishing. But most of the time they travel the lake using the jigging or tip up style.

Whenever the angler on ice is in a permanent fish house they are fishing all allowable holes, even while eating or resting. A well-equipped fish house will have automatic jigging units (like the MOTORVATOR) that utilize sound strike alerts. The noise emitted will even wake up a sleeping angler.

Anglers on ice carefully study the lake they are placing the shanty, and locate it over structure that yields good fishing

action, but allows for minimum movement as fish change their patterns. A critical component of success with the permanent shanty is moving with the fish. Permanent fish houses need to be designed so they can be moved during a season.

While most of my shanty style fishing is conducted using a portable unit, I live on a chain of three lakes, so a permanent shanty goes out as soon as the ice is safe for it. It's located over a sunken island that tops out at 3' depth, has sides that slope 24-28' deep, and there's nice weed structure. This spot provides good northern, walleye, and perch action. With this setting it takes little movement, of the icehouse, to stay on top of good fishing action through the entire season.

Remember, an angler on ice locates a permanent shanty over structure that will allow for minimum movement as fish change their pattern throughout the ice fishing season. Their icehouse is equipped with automatic jigging devices, so they are fishing all allowable holes anytime they are in it. Lastly, they think of their shanty as a base camp, and move over the lake and fish using the jigging and tip up styles.

During the winter season, anglers on ice will use all four of the styles for fishing. They will select one based on the species, time of the season, body of water, and the weather conditions that are present for an ice fishing excursion. Using proven specie techniques along with the proper style of ice fishing can take you from being just an ice fisherman to an angler on ice. Look in the next issue for coverage on the remaining style of ice fishing.

Dan Anderson
Editors Note: This is part 3 of a 4 part series. Click here to read Part 1 or Click here to read Part 2
Dan has examined ice fishing practices including the methods used by ice fishermen, their purchasing habits, safety values, and success rates. He's arranged ice fishing strategy in an easy to utilize method for increasing production and is the originator of the "STOP- Ice Fishing and START- Angling On Ice" concept using four styles of ice fishing and three methods for traveling light throughout a season. Dan's also a seminar presenter, director of the Ice Pro Team for Finicky's Fish Factory, and licensed guide.
TRENDING DISCUSSIONS
Advertise here