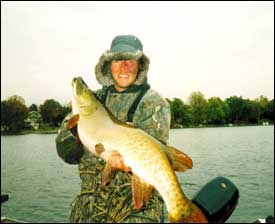 Does the moon phase really have an effect on the fish activity? This question was one I often wondered about, and depending on whom I talked to the answer varied. While over the course of time the response from experienced anglers began to say consistently that yes this is a legitimate factor, I still wasn't convinced. Sadly enough, I will say today I wished I had taken to heart what those people where saying.

Think about how many times somebody has shared with you a tip or technique that they would swear by? If you are like me you listened politely, and carried on your way never to even try it. While I'm about to share my limited level of experience with moon phases, please take into consideration I am not an expert on this one. There are still many areas of utilizing the moon phase to your advantage that I am still learning, however, looking back in hind sight the majority of good muskies in my boat over the seasons have coincided with peak moon phases.

Take a look at the Moon Phase chart for October and you will notice the five day window highlighted from the 18th through the 23rd, with the 21st being the full moon. Each day of that phase client's had hooks in muskies! All but one of those muskies was over 40", with only one at 34"! The biggest musky in that window was the 45" that I am holding in the picture. Guess which day the 45" was boated? You guessed it, October 21st at the peak of the full moon. The sunrise was at 7:41am that day, and the moon set was at 7:51am, and the fish struck at about 9:00am. I have had very good action windows on the water at the peak of the new and full moon each month, and especially whenever there is an overlap in the sunrise and moonset, or moonrise and sunset. Earlier in the month of October my clients were experiencing the same window of action during the new moon phase, which was occurring on October 4th through the 8th. While we didn't boat any huge muskies one client lost one of the biggest muskies I've seen in a long time on the 7th, which was the day after the new moon. (Just for your curiosity, the fish was well over 50")

Let's take a look at November and pin point the peak times of the month. This is the month that will generally offer up some of the roughest weather Mother Nature has to dish out, along with some of the true giants of the musky world. You'll see on the November chart that the 3rd through the 7th will be the new moon phase, with the best overlap of sunrise and moonset occurring on the 7th within eight minutes of each other. Two weeks later on the 16th through the 21st the full moon phase will occur, with the ultimate overlap occurring on the 19th, with moonrise at 4:34pm, and sunset at 4:36pm.

Again, while I am not claiming to be an expert on moon phases, I have experienced enough success to believe in it for myself. If you are skeptical, keep an ongoing log of your fish caught, and then over the winter go back and look at the moon phase charts, I think you'll be surprised to find just how many of those good days on the water will have occurred during peak moon phases.

Good luck out there, stay warm, be safe, and whatever you do, go fishing during one of those peak moon phase days before the lakes freeze.

Best to you all, and better fishing!