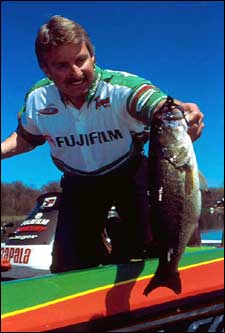 It impacted the water with more of a detonation than a splash. Once the mushroom cloud settled, I began cranking. The lure’s mass constricted the line like a tightrope. The pole bowed. No black bass could consume such a mammoth bait…

The lure’s blades flashed brilliantly and pounded like timpani. The retrieve continued; I was halfway in. Confidence was waning, though. It must be too large. But then, contained within a nanosecond, faith was restored. Somewhere, beyond the weedline, down the break, the freakish spinnerbait was waylaid. At first there was the feeling of emptiness in my hands, but that vacancy was soon replaced by a jolt, a waterskiing takeoff sort of dislodging. A good fall fish was on the line.

On that day my level of trust in big baits elevated. I now hold confidence that during autumn I can toss larger-than-normal lures to largemouth bass, even smallies, and expect to get bit. Moreover, I trust that said baits, when put to task in the fall, will summon the largest fish in the system, period.

But before divulging specific lures, as well as suggested locations, it’s necessary to first paint the picture. Like spring, autumn is a season of transformation. The leaves go, but so too do water temperatures. Waning sunlight hours and narrowed heating angles cool the lakes and rivers. And somewhere within the low 60° to upper 50° range bass respond to a calling. Nature’s directive tells them to eat; eat often and eat large. With cultish vibrato they respond, but seldom act alone. Fall’s influence also causes bass to school, sometimes herding 30 to 50 fish into a solitary spot.

Cooling water is also clearing water. Turnover’s a thing of the past. With that in mind, understand that a little sunshine activates molecules and pushes the hot button on bass. Forget about frosty mornings and frozen finger evenings for now. Banker’s hours are in play.

So fish are on the feed and traveling in gangs. The beauty of schooled bass is that if you’re into ‘em…you’re into ‘em. But conversely, an unorganized exploration can put hours between strikes. Lazer-like accuracy is in order.

I’ve fished a lot of fall bass, and over the years have taken notice that fish, particularly large ones, camp in one of two vicinities, both of which are deep, like 10 to 25 feet of water.

Primary and secondary shoreline points are the first target. Bass will gather on the sharp breaks of such formations, especially if the slope hooks or curls. In addition to steepness, better points boast lingering vegetation that interacts with a hard bottom, usually rock or gravel.

The next best venue is an established outside weedline, but only one that materializes off a large weed flat. Additionally, my top weedlines setup next to major drop-offs and incorporate a few weeded fingers. And as far as weed composition goes, nothing outshines deep coontail. Unlike cabbage and milfoil, coontail holds its characteristics – baitfish sanctuary, oxygen, shade, etc. – throughout the fall.

With spots established, out comes the heavy artillery. Humongous spinnerbaits were introduced in the opening narrative. These bladed wonders are bass slayers and see plenty of time on the field, but before spinnerbaits come crankbaits.

In autumn, nothing pinpoints bass faster than a bulky crankbait. And besides its ability to locate fish, a crankbait will frequently return with weeds, providing samplings of weed types and physical conditions. With any luck, it’ll sport dark green coontail, and if it does, toss out a marker.

My preferred crankbaits are DT Series Rapalas and Down Deep Rattlin’ Fat Raps. Both models dive deeply and are appealing to bass. For example, fished with 10 pound test monofilament, a #7 Down Deep will dive to 18 feet, and do so in a hurry. As far as colors go, consider shad in clear water; parrot when it’s a little stained and hot mustard in sullied conditions.

Now, suppose you’ve encountered a scrumptious weededge. Position the boat beyond the vegetation and cast back past the weedline, onto the flat. The plan is to make the crankbait tickle the weed tops and afterward cut through the outer verge. Reel slowly. The crankbait should be wobbling not burning. Baitcast reels with low gear ratios, like 4:3, execute best. And match the reel with a 6 ½ to 7 foot, medium action rod for maximum performance.

If you should get snagged, shake the rod tip, don’t rip it. Oftentimes the crankbait will come unglued and float slowly toward the surface.

Most hits befall at the weededge to about 30 feet beyond the greenery. And when a bass does take, don’t stick it hard. Instead, make a sweep with the rod and continue reeling; setting too hard results in more misses than catches.

Not much changes when the blades come out; same spots, similar casts. Crankbaits are effective at finding bass; spinnerbaits are superior at hooking and holding, as well persuading less aggressive fish.

Typically, I fling ¾ to 1 ounce spinnerbaits – big offerings – with white and blue skirts, sometimes white with black. It needs flying saucer sized blades too, usually tandems, and a combination of styles as well, such as a willow blade with a Colorado. The Northland Tackle Bionic Bucktail Spinnerbait is a fine example. The oversized creature was built for muskies and pike, but I like what it does to autumn bass.

Mimicking earlier crankbait casts, hurl the bait beyond the weedline. Allow it to settle and pull it back over and through the weeds, but at a lesser clip yet. Basically, you’re rolling it through the greenery, letting the spinnerbait flutter and fall occasionally. A modest snap should free the bait if it gets hung up.

Trite but true, fall is short. Birds are up and flocking. Rut’s just around the corner too. Trigger fingers are getting itching across our great nation. I’m a hunter too, but after all the hours I banked this summer sweating for big bass, there’s no way I’m passing on cherry picking season. Ready the cranks and blades…