"I was running fish houses for a resort on Lake of the Woods’ Oak Island…way up north. And I’ll never forget how this kid who worked at a neighboring resort proved that there’s no such thing as too shallow for winter walleyes.

The kid headed out to catch a meal of walleyes one evening. Short on time, he took to the nearest piece of structure 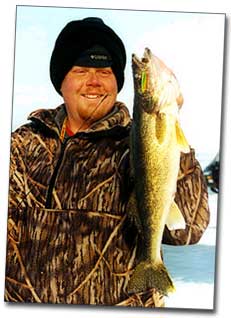 around, which happened to be a rock reef. This particular reef was so shallow across the top that warning buoys marked it during the summer…two feet deep, tops.

On that very evening my fishing party was working deeper breaks off the same reef, with some success. I heard an auger fire up so I spun around to see who was fishing inside of us. It was that crazy kid. I snickered. But my tone soon changed as my fishing party watched him hook a walleye…and then another one and another one."

Since then, Chip, as well as his partner Tommy Skarlis, have proved this shallow-water-phenomenon on practically any body of water where walleyes roam. Even on lakes, reservoirs and rivers where deepwater patterns dominate, somewhere, somehow, there’s a shallow walleye bite. What constitutes shallow? On Ice Tour regards any depths of 10-feet and under to be shallow.

In a walleye’s world, shallow means active and shallow means feeding. Shallows can also be dangerous, because fish lack the breadth of protective structure and deepwater sanctuary. So when walleyes range shallow, rest assured they’re alert, thrifty, and looking to score a meal.

The When
Winter’s natural progression yields two primetimes for chasing shallow water ‘eyes. During early ice, when oxygen and baitfish abound, walleyes spend considerable time up high. The same goes for late ice, when shallow terrain re-oxygenates by way of melting snow, and extended daylight hours with heightened sunlight angles foster new weed growth. These fish are also fattening up to spawn. It’s during the in between periods where shallow water raids are fewer and further between. Think deeper and offshore for mid-winter walleyes.

A walleye’s light sensitive eyes are certainly not designed for effectiveness in bright and clear shallows. Therefore, the best times of day for probing shallows are dawn, dusk, and overnight, when a walleye’s vision does yield an advantage. Notoriously dark lakes are exceptions to the rule. Here, midday forays are common and nighttime bites rarely occur.

The Where
Think of shallows where walleyes feed as "food shelves". In general, they’re hard-bottomed stretches – bigger the better – in less than 10-feet of water, with access to deepwater. But they’re not always shoreline related, as you’ll soon see.

Sizable shoreline points are one of the finest shallow water formations. Look for a point, which features an expansive bar, almost a flat (food shelf), that stretches far and wide before tilting deeper. Points that break quickly and deeply from shore aren’t what you’re searching for; they’re better suited for mid-winter, mid-summer, and late fall.

Shallow sand or gravel flats featuring broadleaf greenery (cabbage) are exceptional – beds of bushier coontail and milfoil can also host walleyes. On natural lakes, where weeds flourish, it’s usual to encounter distinct inside and outside weededges. Shallow feeding walleyes scour such edges for baitfish. Typically, Chip and Tommy explore the deeper weedline at dawn and dusk and the shallower inside edge overnight. The depth of an outside weedline varies from lake to lake. On murky waters it might appear in less than eight feet of water, conversely, vegetation will grow down to 15 and 20-feet of water on clearer waters.

Pockets and clear lanes inside a dense weed mat also provide shallow water habitat. And, the surrounding and protective

Weed patches carry a premium on lakes and reservoirs where barren sand, gravel, and rock dominate the shallow waterscape. Even scraggly weed plots will hold crayfish and baitfish in areas others devoid of vegetation.

One last vegetated situation to look for is a stand of emergent reeds or bulrushes over clean (hard) bottom. Points, reef tops, and shoreline flats frequently sport emergent weeds in five to ten feet of water – these can be deadly zones during low light periods. Wisconsin’s Lake Winnebago and Big Stone Lake, which creates part of the Minnesota and South Dakota border, are renowned for producing walleyes in standing weeds.

A trough is another shallow feature Chip and Tommy seek out. Subtle two, three, and four-foot depressions, over otherwise flat expanses, are typical on larger waters dominated by sand and gravel. Organic material settles inside troughs and subsequently encourages weed growth and adds color (darker) to the water. Minnesota’s Leech Lake offers walleye-infested troughs over sand flats; most of which are unmapped. Take note of troughs when you find them, because you’ll want to return year after year.

On bodies of water such as Devils Lake in North Dakota, flooded roads and highways present ideal terrain for shallow water assaults. Reservoir related, submerged creek channels, which bend toward shore, create washouts that also qualify as shallow walleye habitat. And river oriented, add to your list the juncture where a shallow backwater greets the main channel.

Leaving shoreline locations we next find shallow ranging walleyes over offshore reefs. Reef tops, like the one in Chip’s opening narrative, make the grade. Realistically, reefs that crest at six or eight feet of water have greater potential than ones peaking at only two or three feet, but fear not lesser depths. And the more surface area across the top of a reef the better.

As you can see, fishable shallows are quite common.

The How
Catching shallow walleyes is an art. Okay, that’s a bit overboard, but tactical refinements are required.

You must first be cunning and quiet. March around as little as possible and avoid dropping the ice scoop or minnow bucket. Hold lantern light to a minimum – It’s unnatural and causes shadows. Frisbee and touch football are out of the 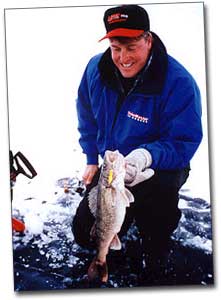 question and man’s best friend should be left at home.

Chip and Tommy have a system of counteracting a walleye’s innate advantage. Their first move is to scout an area long before "witching hour". By day, particularly early in the season, favorable habitat, such as rocks and weeds, are visible through the ice. Scout and cut holes ahead of time. And if possible, pop your holes over patches of snow or darker ice, both of which conceal shadows and movement.

Once the drilling is over, Chip and Tommy deploy a couple of remote lines (tip-ups). This enables them to sample an area without disturbing fish. And there’s no better tool for exploration than Finicky’s Fish Factory – it’s the ultimate remote setline device. Unlike traditional motionless tip-ups, The Finicky’s auto-jigger keeps your presentation lively. Speaking of presentation, it’s wise to rig your Finicky with a plain hook and sizable minnow, such as a shiner, chub or small sucker. A large and natural offering, positioned in an isolated spot, has the power to dupe really big walleyes and it offers fish an alternative to jigs and spoons.

Aggressive times call for aggressive measures, so don’t be afraid to jig with gaudy spoons. Chip compliments his field of Finicky’s by jigging a Northland Buck-Shot Rattle Spoon matched with the front half of a minnow. And most of his shallow walleyes come during low light intervals, so Chip straps a Northland Fire-Light Glow Stick to his spoon.

Tommy also favors a clattery lure, so he fixes up a Lindy Rattl’r Spoon with the head of a shiner minnow. He squirts on a glob of Berkley Walleye Attractant to make his presentation even more irresistible during low light conditions.

Sight fishing is often part of the equation. In clear and shallow water Chip and Tommy look down their holes, monitoring jigging motions and watching for incoming walleyes. Larger 10-inch holes make for better sight fishing, and with their Fish Traps pulled shut, remaining ambient light illuminates the lake floor. A well-energized glow (phosphorescent) lure is easily seen in low light conditions; turn your Coleman lantern all the way up to really intensify the lure’s brightness.

Jigging with such a short leash demands specific gear. Your reel must feature instant anti-reverse and a reliable drag. The instant or Infinite Anti-Reverse found on an Abu Garcia Agenda delivers an immediate and firm hookset in shallow water. Its drag-system allows a sizable walleye to run without the reel seizing up and causing the line to pressure break.

Your complimenting rod needs good length with a firm but not stiff feel. The 29-inch ML Dave Genz Series Lightning Rod meets the demands of lighter tackle. For heavier tackle, such as spoons, the 30-inch M satisfies; the new 26-inch was custom built for sight fishing and jigging in a shelter without hitting the wall.

Spool her up with six or eight-pound test Berkley Micro Ice and you’re in business. Micro Ice, a monofilament specifically engineered for ice fishing, yields the perfect amount of stretch for battling walleyes in shallow water.

Never say never when a hunk of structure looks too shallow. On Ice Tour knows that shallows aren’t always the magic bullet for engaging winter walleyes, but when the sun’s low and your deeper haunts aren’t producing, the dinner bell is ringing over some shallow food shelf.