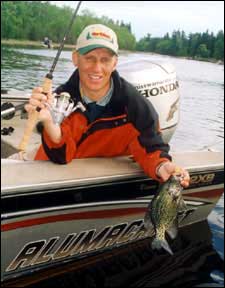 Late summer and early autumn can provide some wonderful fishing opportunities. Unfortunately it seems like some species of fish, like walleyes, bass, crappies, muskies and pike get all the attention while some other species of fish go unnoticed and under-appreciated. Following are some ideas how you can catch more fish and broaden your fishing skills in the next few weeks.

Three species of fish that are abundant throughout the Midwest but are overlooked in many areas are yellow bass, white bass, and catfish. All three can be very easy to catch, fight well on tackle that allows them to display their strength, and are excellent table-fare.

Yellow bass go through cyclical highs and lows in population. When they get into that eight-inch size range and larger, it is a good idea to take them home for supper. They eat as well as walleyes and it is good for the body of water to take them out.

Yellow bass like small baits. One of the best ways to catch them is with ultra-light equipment. Four-pound test Trilene XL on a matching rod/reel set up is perfect.

Tie a 1/32nd ounce Gypsi jig/minnow to the line, then crimp a splitshot or two onto the line about a foot above the jig. Drift in yellow bass terrain until you find them. Once they're located, drop an anchor and cast or jig right over the side of the boat. When the action slows, go looking for them again.

White bass are generally larger than yellow bass, and just as scrappy. They are susceptible to a variety of lures. Whites are abundant in lakes and rivers, and are cyclical in population levels.

It works well to troll a crankbait to locate the whites. However, as you troll, keep an eye out for birds diving to the water. The birds are diving for minnows on the water's surface, and the minnows are on the surface because the white bass are feeding on them from below. This is not a pleasant time of the day for minnows.

When you see the birds diving, get to that area as quickly but as quietly as you can. The water will be alive with activity. This pattern is productive on rivers in particular throughout the Midwest. I took advantage of this scenario recently on Lake Pepin, a wide spot on the Mississippi River. When we located the white bass on the surface, we caught them on almost every cast. Frenzy Poppers in the Threadfin Shad color were the best.

Don't forget catfish this time of year. Their numbers are strong almost everywhere, and in some areas size is also very good. Catfish populations seem to be pretty stable. The best ones for the table are the two and three pounders; bigger ones should be put back to make more two or three pounders.

Cut-bait and dip-bait are most popular and do a good job. Catfish will inhabit a variety of areas in a lake or river. In rivers, logjams will hold lots of fish. Try an area for fifteen minutes at the most. If nothing happens, try another spot. Pay attention to the types of areas that hold the fish, then concentrate your efforts in areas like that.

Right now is a great time to take advantage of these under-used species of fish. Get out at your next chance and find out how much fun they can be.