Hunting The Other Ducks! 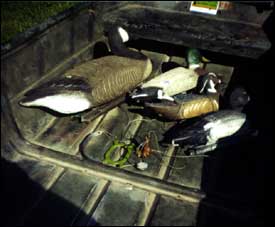 Most waterfowlers,especially those in the southern states, equate Duck Hunting with Mallards. While they do harvest other puddle ducks, it is usually while pursuing Greenheads! The ducks I'm referring to, are Teal,Wood Ducks,Widgeon,Gadwall, Pintail, and even Black Duck! Like the old saying goes"variety is the spice of life",and variety is what makes waterfowling interesting!

As most of you reading this article, duck hunt in "Northern States", I will take you through a progression of the species in Wisconsin waters. Early in the season if hopefully we didn't have a good frost by the opener, we will be hunting Bluewing Teal, and Wood Ducks. Bluewing Teal, or "shell burners" as they are sometimes referred to, are usually the first ducks to leave, when the cold weather sets in. This could be as early as September, or as late as the end of October, but generally we only get a week or so of good shooting at these "Blue Darts"! Small ponds, marshes, and potholes, are the best bet for these ducks, which are easy to decoy, but hard to hit. Basically,you can hunt both species of Teal, with the same methods,but the smaller Greenwing Teal, will remain in Wisconsin, almost to the end of the season. You can hunt these little Greenwing"Buzz Bombs" on somewhat bigger lakes as well, as we have harvested these Teal on Puckaway hunting for Divers! Due to the expense of having many decoys, I would recommend using Mallard Decoys,with some Wood Duck decoys early, and a few Greenwing Teal decoys, through the season. Greenwing decoys will work for Bluewing as well, and will save buying Bluewing Decoys for only a week or so of hunting.

While Wood Ducks will decoy to Mallard decoys, if you are after just the colorful "Woodies", you should get about 4 to 6 Wood Duck decoys. Hunt these birds in marshy potholes, or small farm ponds, along sections of hardwoods. Wood Ducks prefer acorns as a food source, and setting up decoys along the wooded shoreline, in pairs of drake & hen, will simulate, undisturbed,feeding ducks. Wood Ducks are usually the next to migrate out after the Bluewing Teal, so concentrate on these areas,and save the Mallards for later, if this beautiful duck is your preference!

As we progress into October , we start to see more Pintail, and Gadwall. Pintail have been on the decline lately, as evidenced by our shortened season, and limit on these birds. I would not recommend targeting these birds for this reason, and you will harvest enough "Sprigs"as a result of hunting Mallards! Gadwall, generally are easy ducks to decoy using Mallard setups, and many a hunting trip has been saved by a limit of "Gray Ducks" later in the season. Gadwall also seem to prefer dropping into marshy potholes for the evening, so using some Mallard "dekes" placed in such an area will produce some shooting. Scouting ahead of the hunt can tell you which potholes the Gadwall are hitting, and improve your success!

Through most of the season we seem to pick up Widgeon, and Black Duck, along with the Mallards, so any area good for Mallards will work. Mallard decoys will work for Black Duck, as they usually travel together, and will also work for Widgeon as well. I have noticed in my hunts in the Grand River Marsh, that a setup using Mallard decoys, with some Ringbill "dekes", seems to attract both Widgeon, and Gadwall. I think this is more than coincidence, as the Gadwall, and Widgeon(when allowed) will land in the Ringbill decoys, as the Mallards land by their "fake" cousins. Just a thought, but as I don't use any Gadwall, or Widgeon Decoys,this seems like an alternative! Most of these ducks can be hunted with the same decoys, location, and methods as Mallards, but the deciding factor can be calling!

To start with a good all around call would be a double reed hen Mallard call, like the Primos Original Wench ! This will not only imitate the hen Mallard, but the hen Black Duck, and to some extent it will work for Gadwall as well. After all ,we know its the hen,or females that lead the gang around, or into trouble as is the case with calling ducks! For both species of Teal the Primos Hen Bluewing Teal call will reproduce the high pitched quacks of the hen,which will swing that flock right into your decoys.If you are looking to hunt Woodies, a Wood Duck call ,like Primos Model # 807 is an excellent choice. This call not only reproduces the flying, or alarmed call of the Wood Duck, but the "sitting on the water" call which is what is needed for a hunting situation. For reproducing the call of Widgeon, Pintail, and drake Teal, and Mallard Drake as well a Mallard Drake and Duck Whistle can be used. The Pintail call can be made by blowing into the whistle ,while fluttering the tongue,in short and long bursts. A widgeon call is a three note sound made by blowing into the whistle saying ,we,wee,hoo, withthe accent on the second note.The drake teal sound is just a simple peeping made into the whistle at an irregular rythem. The Mallard Drake sound is made by grunting the word Breeze into the call, trying not to sound too excited,or alarmed, as you want to imitate a contented feeding duck. Many times when ducks are pressured, and have heard too many "Hen Quacks" this style of call will add realism and be the "finisher" that will bring them into the decoys!

These are just a few tips to help you harvest the "Other Ducks" , if puddle ducks other than Mallards are what you are after! I'll bet you thought this was an article about " Diver Duck Hunting " ! Maybe next month we can go into hunting "Diver Ducks" The "Other",other Duck!