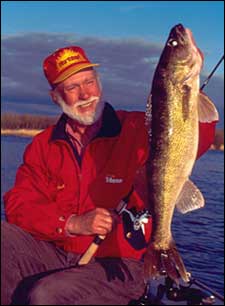 There’s a place where the water’s dark and cool even while surface temperatures seethe. Forage abounds and the oxygen’s thicker than a rain forest canopy. Cover’s plentiful too, and it’s surprisingly peaceful below despite the fact that this fantastic place is quite shallow, sometimes, unbelievably shallow.

"Shallow?" you say. "Sounds like a description of a deepwater hideaway..."

That’s true. Conditions are agreeable down there as well. But when the heat’s on, walleyes split-up. Some retreat to deeper environments as thermoclimes develop and baitfish plunge. Others recoil to vegetated areas. Places where stalks grow tall and foliage gets thick, nearly impenetrable; places where walleyes seek solace, shade, and critters to dine on, but don’t need Jules Verne’s submersible to get there.

Most if not all middle aged, mesotrophic lakes yield healthy summertime greenery. Abundances and densities vary, but all sport weeds nonetheless. And the more and heavier the weeds the better for walleyes, as they find added ambush points and grub, namely baitfish and smatterings of crayfish. And equally as essential as thickness is the state of the weeds, as greener vegetation harbors more oxygen, and ultimately, more fish.

Varieties of weeds are germane to the lake and region at hand. Walleyes will inhabit sundry types. Better concentrations of fish, though, will inhabit leafy cabbage and shaggy coontail, as opposed to wispier grasses.

Depth must also be considered. How deeply vegetation roots is lake-specific and largely dictated by water clarity. In stained water, where weeds can’t develop as result of sunlight starvation, weed-walleyes cavort in 3 to 6 feet – 14 to 16 feet with moonshine clearness. 8 to 12 feet is more typical, though.

Where and how the weeds form is similarly important. Weeded bars are good, so too are offshore and vegetated humps. Basically, it’s always an improvement to encounter weeds that either relate to structure, such as a sunken island, or generate their own formation, such as the case with a weeded bar. And within a particular weed bed you’ll engage more fish within cleared-out lanes and pockets, as walleyes are bestowed enhanced operating space. Correspondingly, such hollows are also easier to fish. Fewer snags. More hooksets.

Now that you’re over the initial flabbergast of learning that walleyes, like bass and pike, enjoy the bounty and fortification of weeds, here’s another doozy. More often than not, midday grants the best window of opportunity… Save the reefs and rock piles for morning and evening escapades, because during the afternoon swelter more ‘eyes rummage amidst the greens. High noon to 4 pm is generally best.

The overhead canopy snuffs sunlight faster than a solar eclipse, and curiously, activity is hottest under throbbing sunshine, which is contrary to popular theory regarding walleyes. The spike in activity is likely due to the truth that weed-oriented baitfish – perch, shiners, etc. – are most energetic near midday.

"Water, Water, everywhere, But Not a Drop to Drink"
Rime of the Ancient Mariner, Coleridge

What’s this tired quotation have to do with weed-walleyes? Well, no matter how many fish circulate in the weeds, all’s for naught if you can’t get ‘em out. Fortunately, there’s a remedy, actually, a couple of proven strategies...

The initial technique is aimed at finding fish, and as swiftly as possible. And nothing surfs veg like a live bait spinner. Northland’s Rainbow Baitfish-Image Harness is a wise choice. Its holographic image accurately mimics baitfish. But despites its fishy appearance, the double hooked harness is best fixed with a night crawler. Crawlers are summertime killers and confirmed big fish baits.

With a single split-shot pinched just above the swivel – shot weight influenced by depth and speed – drift or troll (electrically) across the weed flat and outside edge with 50 to 75 feet of line out. Permit the spinner to skim but not bury in the foliage. It’s a fast presentation too. Speed triggers strikes, particularly during summer’s dog days.

Strap on a spinner. Cover water. Locate fish. And then fine-tune your presentation. Once a crowd of fish is realized, make a move to jigs, like the Northland Weed-Weasels. The lure’s sloping wedge-head design and plastic weed-guard vigorously fend against snags. The jig can be dressed in several fashions. Half crawlers grade highest, followed by leeches. Sometimes, a plastic grub body does the deed, especially when walleyes are breathing fire.

Jigging through vegetation is best accomplished with short, controlled casts. Pick a lane or hole, pitch to it, let the jig settle, and work it back, swimming the bait with sluggish jigging motions.

A slip-bobber is the final act. In the thickest of thick or when ‘eyes are pinned against the outside edge you can issue surgical strikes with a leech and Super-Glo Attractor Hook, typically a #6 or #4. Slip-bobbers are effective for funneling bait through small openings in the weed-awning that shade roomier gaps below. A seemingly petite one-foot diameter crease can be the gateway to a 10 foot by 10 foot den of walleyes.

Fishing through a forest is demanding of tackle, as well as gear. You rod and reel selections should be more analogous to bass than walleyes. For example, employ 8 or 10 pound Berkley XT (green) instead of the universally accepted 6 pound XL, it’s simply too fragile. Plus, weed-walleyes aren’t line conscious one bit.

Stiffer rods also get the call. Leave the ultralight poles at home. Weed-loving ‘eyes need to be ferreted out with a 6-1/2’ to 7’, medium/heavy spinning rod. While running spinner rigs, baitcasting equipment is put to play.

There. The table is set and salad served. Fresh greens seem to always come accompanied with meat, hopefully walleyes. What’ll be in yours?

John Peterson
John Peterson is the President Northland Fishing Tackle. John has been fishing for over 40 years, and has been active in many of sport fishing tournamant and promotions throughout the US and Canada. He won the prestigious '96 Professional Walleye Trail tournament on Lake of the Woods, and is a six time PWT championship Qualifier. John was a past Muskie, Inc. tournament winner, and top ten finisher on the Minnesota State B.A.S.S. championship.
BITS & BITES
Advertise here
Advertise here
Please take a moment to visit our sponsors. Without them we would not be here.