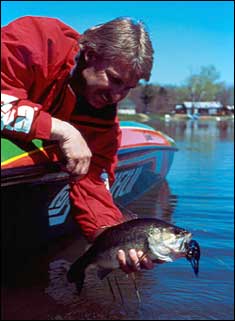 Soon, the grassy fields will be clipped to precision and white lines painted in. On Friday nights, overhead lights will illuminate the gridiron, players, and cheerleaders. Gotta love those varsity football games…

Pigskin season still carries significance for me today, but not in a traditional sense. Nowadays, my footballs are tossed to largemouth bass, not wide-outs or tight ends. The ball’s no longer made of leather, but oddly shaped lead. And best of all, I don’t have to wait for autumn, because the game’s already underway.

Bass have been eating football – “roller" – jigs for years. In fact, the lures gained tremendous popularity in the early 90’s, but have since lost some identity. These days, most guys lump bass jigs together, labeling them ‘jigs & pigs’, not paying much attention to specific designs.

Footballs are different, though. Contrasting to the modest tapers of conventional jigs, football jigs feature an oblong head that resembles a barrel with rounded cone ends, like an actual football. The head lays sideways, left to right, with the skirted hook portion to the back. The purpose of this unique shape is to cause the lure to rock, front to back, while positioned on the bottom. Bass must deem the motion curious, then edible, because they vacuum-up football jigs faster than a Kirby on cotton balls.

Footballs are killers over hard bottoms, like rock and gravel, but so are most jigs when bass are on the bite. So I pick and choose my spots for unleashing footballs. And opportunely, there’s an ideal situation happening on the water right now.

Being well into the midsummer recovery – deep post-spawn – bass are schooling again. A quality spot might hold 6, 8, 10 or more respectable, possibly trophy fish. And they’re gorging and metabolizing, making it feasible to trace long stretches of weedline and pickup bass, but not necessarily densities of fish. That is unless you know what to look for.

My top producer is situated along the outside weededge too, but only a precise section. To qualify, the vegetated brim must first trace a thick, if not extensive weed flat. A flat composed of curly leaf pondweed (pickle weed) or broadleaf cabbage. The best flats merge with an outer, deeper layer of coontail that fades into dark watery nothingness – a sure sign of a brisk drop-off or change in bottom composition. And the makeup of the bottom beyond the vegetation is crucial, because if it ain’t hard, I’m not interested.

So you’ve got phenomenal vegetation snuggling up to a firm floor. Is the spot complete? Not yet, I’m pretty scrupulous about spots… The outer weeds must also be part of a bar, an underwater point. And little bars will hold fish, but bigger is unquestionably better, so too are bars with rock fingers that probe even further and deeper. And the Cadillac of bars is one that halts, tenders a weedless breach, and then reforms into an independent weed clump or clumps.

So with a potential hotspot under thumb, the field is set to toss ‘em a few footballs, but a little more on the jig itself first... I’ve depicted the shape of the football head, but haven’t discussed size. Typically, ½ and ¾ ounce jigs get it done. As a rule, use as much weight as needed to feel, I mean really feel the bottom – every tick, bump, and bang. Owner and Bass Pro Shops manufacture excellent football jigs. And although they’re not true footballs in form, Northland Tackle’s Jungle Jig can be taught to rock and roll.

To make the jig dance, though, it needs a skirt, actually a double-tentacle, curly-tailed spider grub. You’ve seen ‘em, likely worked one. They look like a swirl-tailed grub fitted with a reverse collar of feelers. I favor 4 and 5 inchers in smoke with pepper flake, brown, and pumpkin. As far as producers, FLW, Arkie, and Yamamoto pour some nice spiders.

Now, let’s make that puppy rock like a cradle… With most techniques the boat is situated deeper or outside the target and casts made inward, but not with footballs. Instead, hover over the weedy flat, say, 30 or 40 feet inside the weededge. Make long casts past the weedline to the hard stuff beyond. The first series of casts should cut crosswise, working both sides of the bar. Then, reposition the boat and cast along the bar’s taper, again, throwing from the inner bar toward the tip – do this on both sides.

The retrieve itself is surgical as the casting sequence. Give the jig a good ride, let it settle, point the rod tip at the splash and begin taking up line. No jigging, hopping, or pausing. Steady and slow. The spidery football will make natural jukes and jives as it glances off rocks and rubble. Generally, when a bass takes, you won’t feel the classic strike, but rather a heavy “wet sock" feeling. That’s the cue to give her a solid, sweeping hookset.

That pig should be stuck! Whip out the Fujicolor QuickSnap disposable and waterproof camera and immortalize that fish, and then return her for future battles.

To make it all happen as designed, the right rod and line must be in hand. My preference for a pole is a 6’6" medium-heavy baitcast rod – Rapala’s new Signature Series includes a model that meets those requirements. The line must be strong too, as well as sensitive and prepared for conflict. In my book there are two choices. If you prefer superlines, Spiderwire’s 6/30 is a good choice. 17 pound Rapala Tough is the ticket in a mono.

Football season is kicking off a wee bit early this season. Don’t wait for the pregame hubbub and opening lineups to be announced. No, tether-up a spidery football jig and beat the bars for bass now, right in the heat of summer.