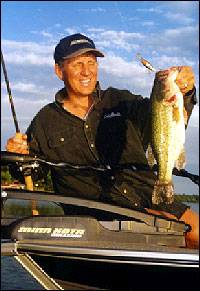 As the seasons change, so do a fish's habits. Even though we may not feel the change in seasons yet, fish are already aware of the fact that before long, their world will be a much different place than it is now. If anglers want to catch more fish, they need to be aware of how the fish's world changes. Much of the time anglers need to change their techniques and fishing locations if they want to be successful on the water.

Think about how the underwater world changes this time of year. Several weeks ago there was lots of food for the predator fish to eat. The perch and bluegills that were spawned in the past spring were plentiful just a short time ago. Now, there are a lot fewer of those baitfish because they became a meal for a bass or walleye. The remaining perch and bluegills that were born just a few months ago are now to a size where they could be too big for a two pound bass or walleye to eat. Food for the predator fish is getting harder to find as we enter the fall months.

Additionally, as water temperatures decrease, fish instinctively know they need to eat more to pile on some fat that will help them get through the winter months. So, we have fish that are looking for something to eat, yet food supplies are becoming more scarce. That creates the potential for good fishing.

Just because fishing could be good doesn't mean it will be. We still need to find the areas the fish are using, and we need to show them a lure that they want to eat.

In the early part of fall, fish can be almost anywhere. If their food is shallow, the predators will follow. If the food goes deep, so will the larger fish.

Many anglers like to move quickly in search of the fish. It works well to troll or cast a crankbait for bass, pike, or walleyes. Go with a Frenzy diver for the bass or a Frenzy minnow for the pike and walleyes. When a productive area is found, you will be able to catch quite a few fish with the crankbaits.

Oftentimes you'll catch a few fish on the crankbaits, then the action will slow. When this happens, tie on a Lip-stick or Fire-Ball jig and tip it with a minnow, leech, or nightcrawler and work it through the same area you have been fishing. An angler will usually be able to catch a few more fish on the slower moving jig with live bait. Be sure to experiment with different types of live bait. Sometimes the fish will prefer leeches to minnows, or shiners to fatheads. The only way to find out is to try different things.

Be sure to watch your sonar for the presence of fish. The Legend 3000 sonar that I use has convinced me to try areas that would have ordinarily been by-passed. If you see fish, at least give the spot a try.

Autumn can be a great time to catch fish, and autumn is either here or near in many areas of the Midwest. Be sure to take advantage of the tremendous fishing that will be available in the next weeks and months.