Muskies In The Dark 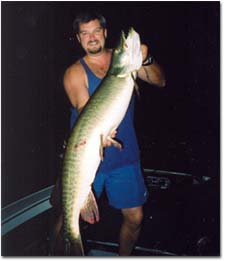 If you're like me, then you most likely share many of the same sentiments regarding fishing anywhere this time of year. It's too damn hot during the day, and too many boats and wave runners tearing the lake to pieces even if you wanted to try fishing any more. What used to be "hot spots" are now "not spots", and I'm beginning to wonder if the musky population in my favorite lake suddenly became extinct? If this sounds similar to your mid-season experiences then hold on, and check out this alternative. I've been spending more time each year on the water after dark and the reasons are simple.

Let's start with the obvious…boat traffic. Boat traffic is an easy excuse in general, because it is impossible to fish productively when everyone right down to the village idiot is zipping around the lake. In turn you have constant boat wake throwing you back and forth, along with the traffic repeatedly running over the structure you're trying to fish. While that makes it tough enough on it's own, what all this traffic ultimately does is drive the bait fish either off the structure, or deep into the weeds seeking shelter. In summary your early season spots aren't necessarily an ideal feeding area anymore. If there's not anything to eat in the area, why would Mr. or Ms. Lunge have any reason to be there other than to maybe get a tan? The other key component here is water temperature. The shallows and weed edges that were home to those muskies, are now simply just too hot. I'm sure you see where I'm going with this, "what happens after dark?" The lake is finally calm, and the temperature cools down. Baitfish move up out of the weeds, or back up onto structure, and the muskies move in to feed on the easy pickings.

While there are many effective ways to night fish, I'm going to profile two of my favorites, top water lures, and trolling.

TOP WATER
Top water lures in the dark are out standing for a variety of reasons, but mainly because you can hear what they're doing. Since it's dark and visibility is limited, the sound of your lure will help you know where it is, and how close to the boat it is getting. You'll know if it gets fouled out on a weed because the sound will change. But best of all, you'll increase your "hook up" percentage in the dark because you won't be able to see that huge fish bulging up behind your lure and psyching you out! It's the ultimate musky experience. In addition, it's also an easy target for the fish to track down in the dark due to the noise and vibration. I have launched the boat many nights at 8:00pm and fished until 2:00am. As the lake settles down from the day's events, the fish move up onto structure to have the feast they have waited all day for. Work the weed beds, points, and sand bars now that all is calm. 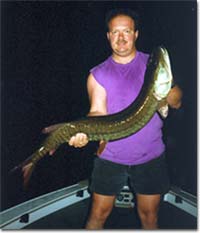 LONG LINE
If top water lures on the structure doesn't produce, then don't over look the possibility of those fish hanging out in open water. If I ever had any doubts about trolling open water, they were shattered to pieces this July, when local taxidermist and friend Dan Johnson suggested hitting the open water. One look at Dan's 48"x 23", 31# will eliminate any question if fish feed over open water. The nice thing about running a long line in the dark is that you can hold the rod in your hand you will be able to tell when, or if, the lure gets fouled out by weeds. A good starting point is to watch your electronics, and find the schools of baitfish. Then clip on a lure that will run the same depth, start covering water and hang on!

BE PREPARED
The best way to fish at night is to ultimately have a partner in the boat to man the net and spotlight when you get a fish. If you're going solo, then get a "head lamp" which is similar to a miner's light. It's a smaller spot light that straps to your head with a head band, offering hands free lighting as you net, un-hook, and release your fish. Have your pliers and hook cutter within arms reach, and keep your fish in the net while you remove the hooks and measure it. It's always a good idea to let someone back home know what lake you'll be going to, and how long you'll be staying out.

Give these presentations a try, I'm sure you'll be glad you did. Until next month, best to you, and better fishing.

Dennis Radloff
Dennis Radloff is the owner and operator of Sterling Guide Service which specializes in Walleye and Musky Fishing. Dennis has helped run and coordinate many of the Lake-Link.com Youth Tournaments. He is also a PMTT angler, Dave's Turf & Marine/Princecraft Pro Staff, and a Mepp's Field Staffer.
TRENDING DISCUSSIONS
Advertise here