While the walleye world is constantly reinventing itself with new technologies, baits, and techniques, sometimes we make things too complicated. Fact is, there are time-proven ways to catch walleyes year 'round that sometimes get lost amidst the clutter of the "reimagination". Like vertical jigging-as well as drifting and pitching 'em-that will boat 'eyes the entire calendar year, not just fall.

Spend enough time in bait shops and you'll discover a whole culture of walleye anglers who do nothing but jig walleyes, quietly boating big fish-and numbers-in the process. 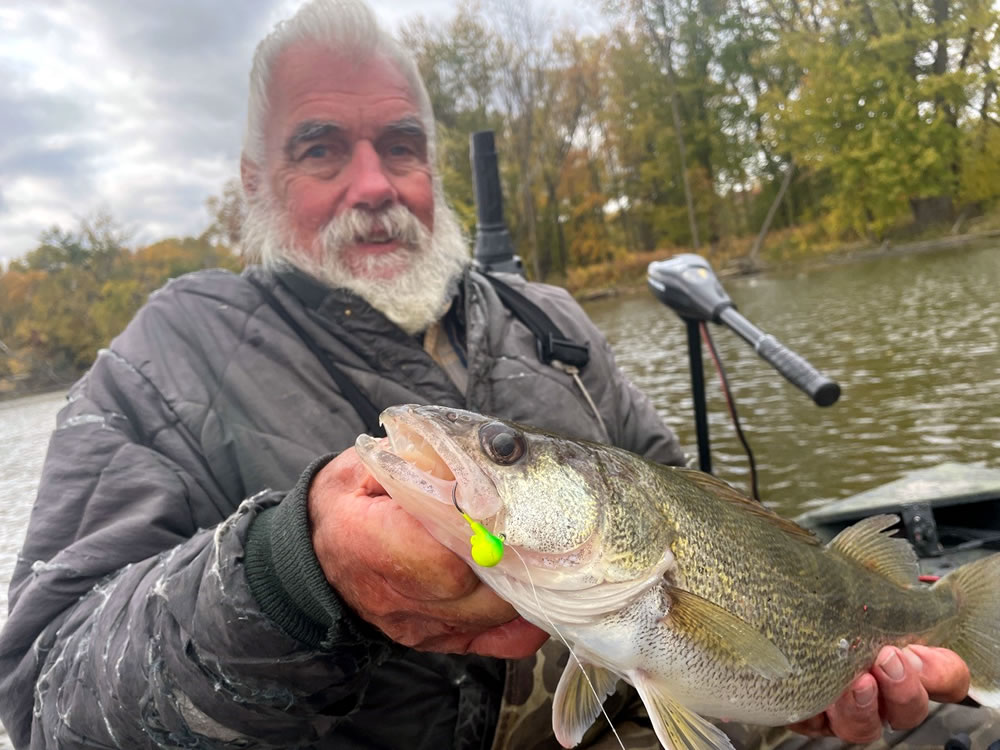 The inventor of "rip jigging" - forward trolling and snapping homemade chicken-feather jigs around 1960 - the National and Minnesota Fishing Hall of Famer, Dick "The Griz" Gryzwinski, has seen it all come and go in his 60-plus year career guiding.

Today, the 80-year-old still guides every day, but stays closer to home on the Mississippi and St. Croix Rivers, no longer traveling north for a week at a time, sleeping in the back of his truck with his dog, clients lined up to catch countless walleyes on Minnesota's Mille Lacs, Winnie, Leech, etc.

When asked if he kept a log of barometric, solunar, and general weather conditions that put river 'eyes on the feed, Griz plaintively replied: "I just go out and fish. I don't give a crap about the weather except for wind direction and water temperature. I fish walleyes every day and just follow their movements."

Simply, The Griz is probably the best river walleye jig fisherman alive, having refined the system of locating and catching river walleyes down to a science. But he also just has a knack for catching fish. If there's anything like a "natural" in fishing, that would be The Griz.

"You gotta keep it simple for clients," says The Griz. "Luckily, I've always caught my biggest and most fish vertical jigging. Clients can do that. You just gotta give 'em a 3/8-ounce jig so they can feel bottom, which they have trouble doing with a lighter jig, even in four feet of water. I used to fish ¼-ounce but have gone to 3/8-ounce for pretty much all my river walleyes-all depths, shallow to deep. And I don't have to work so hard, I always know what my jig is doing."

Tipped with a two- to three-inch fathead minnow - into the mouth and out the back of the head - The Griz uses Northland Fishing Tackle Fire-Ball Jigs exclusively these days. "They just catch fish. Been using 'em since John and Duane Peterson came out with 'em. The short-shank is what I like for hooking fatheads, which is all I use, no rainbows, shiners, or expensive river mix. I like dead fatheads, too. I tell my clients to take the dead ones out of the bucket and use 'em. A dead fathead is kind of white, which the walleyes like." 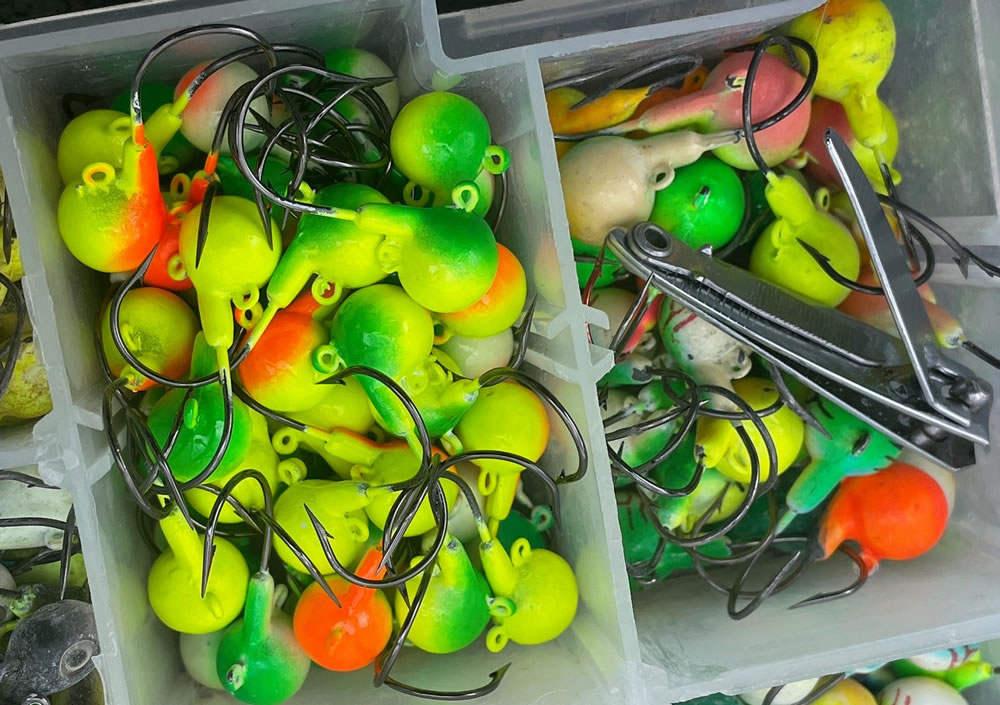 In terms of color, the Griz says it "don't matter" but his rods-and those for his clients-are typically rigged with Parakeet or Glo Watermelon 3/8-ounce Fire-Ball Jigs. The rods vary from 6- to 7-feet medium-light or medium power with fast or extra-fast action and are all strung with 6-pound yellow, hi-visibility Sufix monofilament. 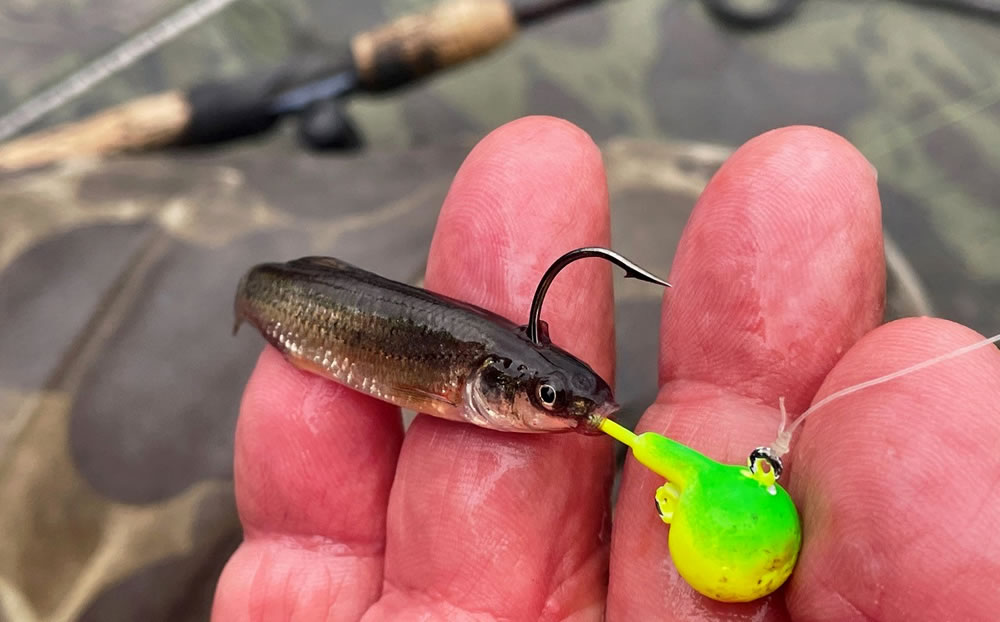 When asked the key to his long-standing vertical jigging program success, The Griz sums it up in two words: "boat control."

"Poor boat control won't catch you walleyes. That's why I don't like front-end trolling motors for river fishing. I see very few bow-mount guys that can control a boat like a guy with a transom mount as far as working the wind goes. I watch a lot of guys. Boat control on the river is 98% of catching fish jigging," offers The Griz.

The other big factors? "You gotta keep your jig vertical-or as much as you can when the wind is blowing you all over the river. And work the current breaks right. That just takes time watching how the water moves. I only use my Humminbird Helix 8 for 2D Sonar and finding depth breaks and watching water temp. I don't use GPS or nothing. Never have. I've been fishing these rivers since I was three years old with my ma and pa."

The Griz' jigging cadence is simple when the boat is controlled so perfectly in the current via his rear-thrust Minn Kota Endura MAX 55 lb. thrust trolling motor. He rarely uses his outboard to prevent spooking shallow fish. Repeatedly-probably thousands of times a day-The Griz starts with his jig on bottom and rod at 3 o'clock on the dial and lifts it up to 2 o'clock and drops it back to the bottom on a tight line. More often than not, the fish hit on the drop, and you'll just feel weight on the next upswing. 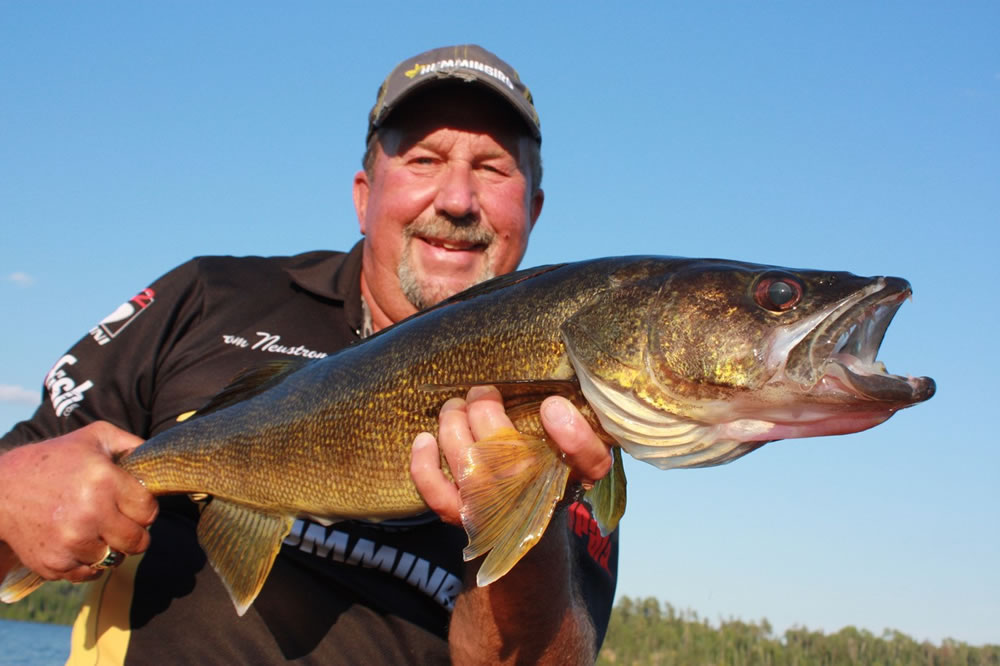 73-year-old Grand Rapids, Minnesota-based fishing guide, National Fishing Hall of Famer honoree, and Minnesota Fishing Hall of Famer, Tom Neustrom, has spent his entire life putting people on fish throughout Northern Minnesota. Like the Griz, Neustrom is a jig fisherman at heart and will use it to catch fish every chance he gets.

A bit different than the vertical jigging river program, Neustrom does a lot more drifting and pitching than straight-up-and-down fishing on northern, clear waters. To that end, he's switched from lead jigs to tungsten jigs for their castability in the wind and quick rate-of-fall.

"Yesterday was the perfect example of the value of what Northland Short-Shank Tungsten Jigs can bring you. The winds were blowing 10-20 with gusts of 30 mph on Lake Winnibigoshish so we concentrated on the south end. Because of the wind, we had to long-line drift our jigs in 11-12 feet of water to catch the fish. You couldn't Spot-Lock on them and vertical fish or pitch-they were spooky. You had to drift," recalls Neustrom.

While wind and walleyes go together, the problem with lead jigs is they don't cast well in the wind unless you size up in weight, which also increases the overall bait profile.

"As the weather changes from late-summer to fall, sometimes walleyes want a smaller profile. They don't want the bigger minnows quite yet. That's where the new Northland Short-Shank Tungstens really excel. They're smaller in profile and more dense by weight than lead, and the aspirin-shaped head really cuts through the wind and water. The hooks are also super stout and ultra-sharp. When you set the hook, the fish don't get off," says Neustrom. 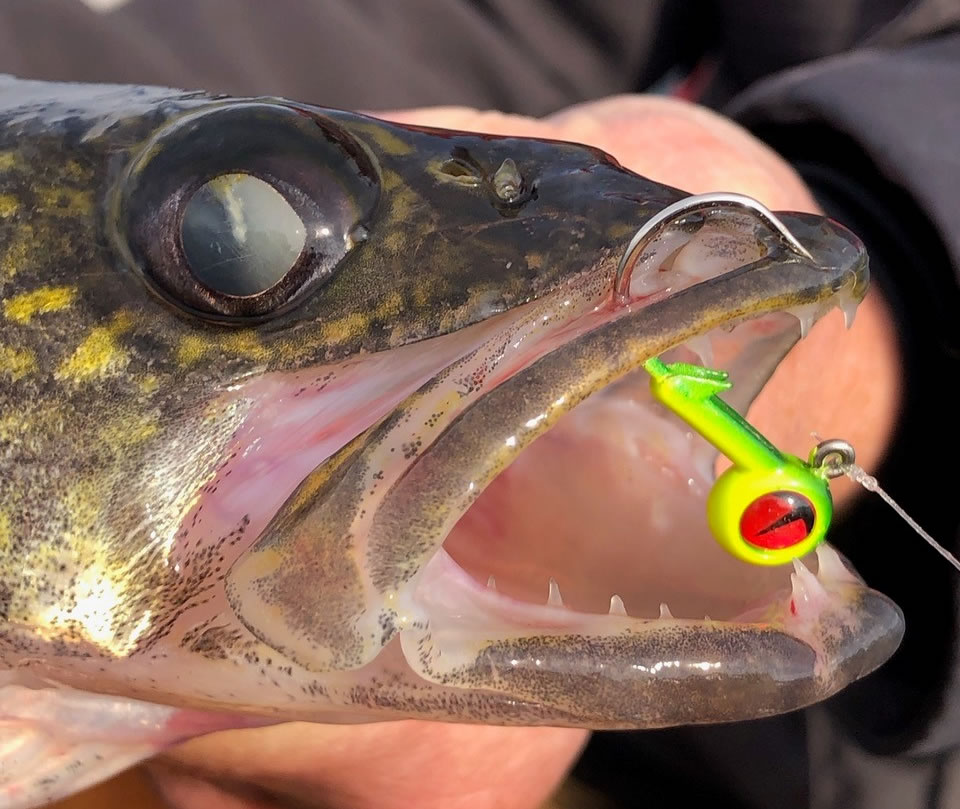 Tipped with a 2 ½- to 3-inch fathead or rainbow, Neustrom and his clients caught a ton of 'eyes drifting the jigs. "Minnow and jig size was key," says Neustrom. "When you get too big with the minnows, the jig doesn't get down quick enough. The fish want a quick rate-of-fall."

"That's what I like. Six-pound mono is faster and quicker in a lot of situations and still has plenty of strength. I've caught a lot of big fish on 6 lb. test. Never had one break me off," comments Neustrom.

"If I'm jigging, I go with mono. I think braid creates too abrupt an action and walleyes want something that slides a little bit, which happens with the buoyancy of mono. I understand if you're in 20- to 30-feet jigging you're going to want braid with a fluoro leader, but for the rest time, I'm jigging with mono. It worked 50 years ago, and it still works today," remarks Neustrom.

Neustrom is also working on a theory that braid may give off kind of subtle vibrations that turn off walleyes in certain situations. 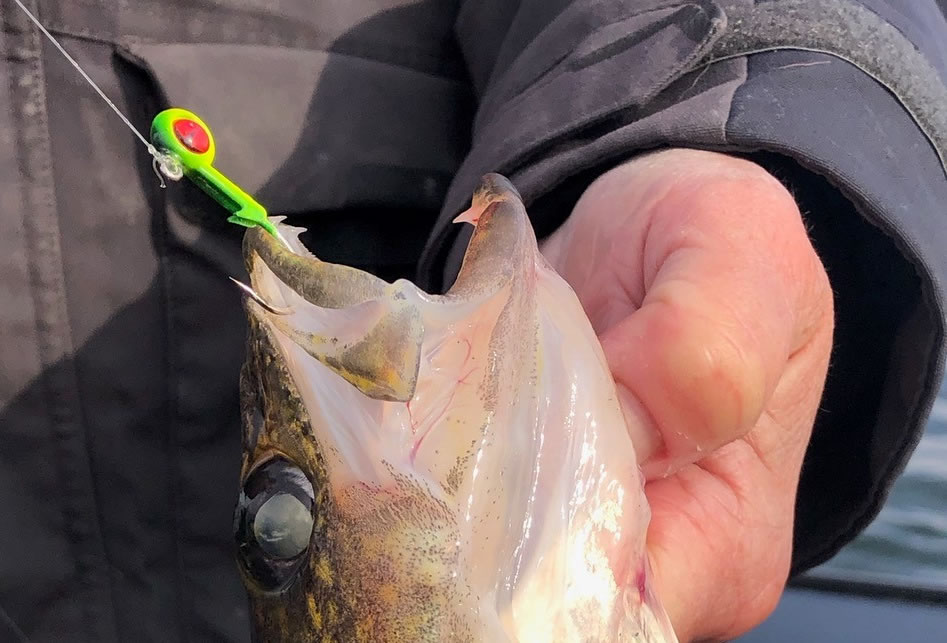 "I like the Long-Shank when I'm pitching jigs. I double-hook the minnow through the mouth, out the gill, and up through the stomach. I also fish it with soft plastics."

As walleye anglers, confidence in your presentation is huge-as both The Griz and Neustrom will tell you. With regards to jig color, Neustrom's two go-to hues are the perch-mimicking Parakeet and the blueish Glo Moonlight. "Gotta have those two jig colors in my boat at all times," says Neustrom.

Neustrom says his jigging cadence changes all the time-and refers to it as a dance with the fish. "Jigging is a dance we do, and I like to consider myself the Fred Astaire of walleyes. You've gotta slow down or speed up your steps with the music, based on water conditions, what's underwater, the weather, and the general mood of the fish. I've learned what works over 50 years or more, so I make these changes intuitively. I rarely even think about it. My advice to anglers out there? You've gotta experiment with jigging cadence. Once you get bit, repeat the process knowing it might be different tomorrow."

Do yourself a favor and get back to the joys of jigging walleyes, whether it's a vertical program like The Griz or pitching and drifting like Neustrom. From dead weight on the lift to subtle ticks-to fish downright clobbering jigs-there are fewer walleye ways that are more fun to fish!