By Lake-Link Staff - August 31, 2022
One of the great things about both early-spring around fishing openers and fall is the proximity in which you can catch walleyes from shore-either by standing on the bank, piers, docks, or venturing out in a pair of waders. This eliminates the need for a big, fancy walleye boat and really puts access to some great fishing into the realm of anglers-of-all-levels. It's not to be missed and only comes around for a couple periods of time each year. The phenomenon happens throughout the Walleye Belt on everything from natural lakes to rivers to reservoirs. Any waters with creeks, rivers, or culverts flowing in and out, sand to gravel and rock transitions, points, accessible inside and outside weedlines, and general areas of current like on river systems in front of dams or incoming creeks are great places to start your search. Lowlight hours are best-either early in the morning or late in the day extending into night, especially during full moon phases that drive baitfish shallow, the walleyes close behind.

Traverse City, Michigan-based guide and outdoors communicator, David Rose, is a big fan of evening and night fishing from shore or in waders during the fall. "As soon as the sun starts going down walleyes will start to transition up over the breaklines. And about an hour after dark those fish will have moved into three, four, or five feet of water. This is when we start using jerkbaits like Rapala Husky Jerks or Smithwick Suspending Rattlin' Rogues in the 4- to 5-inch size range."

Rose prefers a longer rod for shore and wade fishing to maximize his cast distances. "Jerkbaits bode well with the softer tip of St. Croix's 7'6" medium-light power, fast action Premier PS76MLF spinning rod as it keeps the bait from spinning on the cast and tangling up mid-air."

Rose's system is to make a long cast, reel in about three feet to get the lure diving a little bit, and then just let it pause keeping his line taut. It might 30 or 40 seconds - maybe even a minute-and then Rose slowly twitches the bait in about a foot at a time, periodically stopping it and letting it rest. "All of sudden you'll feel that tick and if they're striking from the opposite direction it'll feel more like a bass hit," notes Rose.

In terms of optimal locations to set up from shore, near weedline edges are always good and most any kind of point, especially if it's adjacent to deep water. Sandy, gravel-laden, or rocky bottom areas are often a good clue, too. "Some days, one side of the point will be better than the other, which could be a function of wind direction, barometric pressure, moon phase, etc. They'll either be on the right side or the left side of the point, but those points adjacent to deep water are probably the number one areas to fish," says Rose.

In Minnesota, veteran guide and MN Fishing Hall of Famer Tom Neustrom always looks for the mouth of a creek, a river, any place you've got a little bit of current or where wind was blowing in the day before. "Those are areas where walleyes are going to be. You've gotta find the walleye travel routes. Sometimes during the day when you're fishing you find the routes the walleyes are using to go up and down in depth. Those are great places to fish with waders or just casting from shore if you have the drop-off close enough. Again, a jig and a minnow will work, as well as Husky Jerks or the time-proven F9 and F11 Original Floating Rapala. The new Northland Rumble Shiner and Rumble B are other great baits for fishing shallow from shore or in waders; they cast like a bullet, especially with 8- or 10-pound braid as a mainline and an 8- or 10-pound fluorocarbon leader. It's a great way to catch fish in the evening and at night - and especially if you have some current it can be really awesome," says Neustrom. 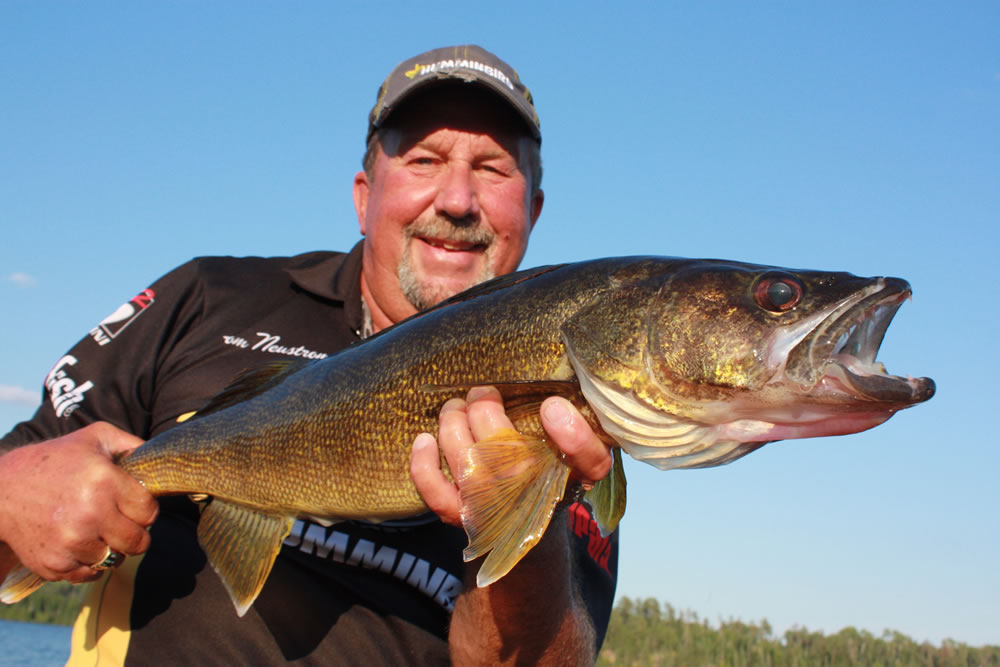 Neustrom also recommends taking along a couple of hair jigs like 1/8- and ¼-ounce Northland Deep-Vee Bucktail jig. "Casting a hair jig far out from shore, letting it hit bottom, and then ripping it back in two- to three-foot sweeps, each punctuated with a fall to the bottom, can produce some bone-jarring strikes. While I usually fish them without bait you can tip with a chub for added scent." 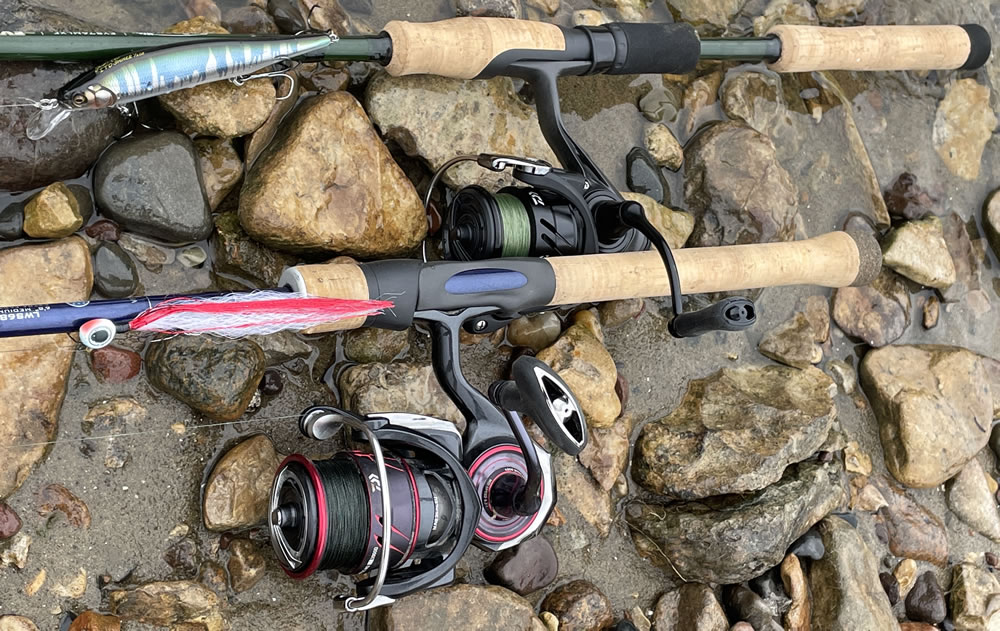 JMO Outdoors host and long-time Dakotas-based walleye guide, Jason Mitchell, believes the early- to late-fall can bring some of the best walleye fishing the Dakotas has to offer. He's quick to note that fall walleye fishing from shore or waders is a tremendous opportunity that sometimes gets lost in this era of forward-facing sonar, big walleye boats, and daily tackle innovations. "You have anglers that are getting intimidated because they might not have a lot of equipment but the reality is there opportunities in the fall for anglers from shore and in waders to outfish those in boats with all the latest and greatest technology and gear. All you need is to break out that pair of duck waders, look at a map for easements-Devils Lake Tourism offers some great resources-and get out there in low-light. It's a great way to put together a fish fry!"

When asked what anglers should be looking for, Mitchell sums it down to one key factor: current.

"Current is the key: box culverts, bridges, causeways where you have flow between two lakes, that, and the rip-rap bite. The rip-rap current combination really seems to be very productive in the fall and there's some great opportunities for shore fishing and waders fishing throughout both North and South Dakota," notes Mitchell.

In terms of tackle, Mitchell says anglers can by with a handful of different baits-there's no need to bring out a lot of gear; a small folding tackle box, a stringer, and backpack is really all an angler needs. "It's hard to beat casting a Northland Fishing Tackle Mimic Minnow. That catches a lot of fish from shore. It's very versatile as far as swimming it back at various depths, deep to shallow. My other go-to is a big Northland Rumble Shiner, especially after dark. Each full moon period gets better in the fall, especially on the lakes with better water clarity."

The system, says Mitchell, works from late-August all the way through ice-up. "The real key is to watch the water temp: as soon as it falls below 70-degrees is when the shore bite really turns on," notes Mitchell.

In terms of line choice, he says that comes down to personal preference. For Mitchell though, he prefers using a 7-foot rod for longer casts from shore and 10-pound Nanofil braid for its added distance, with a two-feet leader of 10-pound fluorocarbon for abrasion resistance. Especially with pike in most Dakota waters, he opts for the heavier fluoro to prevent bite-offs and having to re-tie.

"Besides Devils Lake and the surrounding waters, there are a lot of smaller lakes in South Dakota where you've got smaller lakes connected with a causeway or a culvert and bridge where water flow is increased. These are really good spots to hit, as are rip-rap areas on causeways," says Mitchell.

Although lost in the shuffle of today's current techniques and tactics, fishing with live frogs can be a great way to catch big fall walleyes. "I still fish with them on a short-snelled Lindy Rig tethered to the bottom with a ¼- to 3/8-ounce bell sinker and let the frog sit on the bottom, launching the rig a good distance from shore. Or I take a long-shank jig and double-hook them and cast them out and drag 'em back slowly," says Mitchell.

Mitchell adds: "I like a Leopard frog that's about the size of your thumb. My favorite is finding a shoreline with a slough behind it-this is where the frogs will migrate in large groups during the fall-and you're looking for soft-bottom, shallow water on the lake side. Find that during the frog run and it can be lights out on some pretty big walleyes. They're typically lined up on that lake side waiting for the parade of frogs at night."

Mitchell says the walleye diet is pretty amazing and we can easily forget about the various forage they'll feed on, putting all of our focus on minnows and baitfish. "I've caught walleyes on frogs on mid-lake structure. I don't know if it's because walleyes are just eating anything or prefer frogs, but they just plain catch fish. I've caught some big walleyes on frogs. I think more anglers should give it a try." 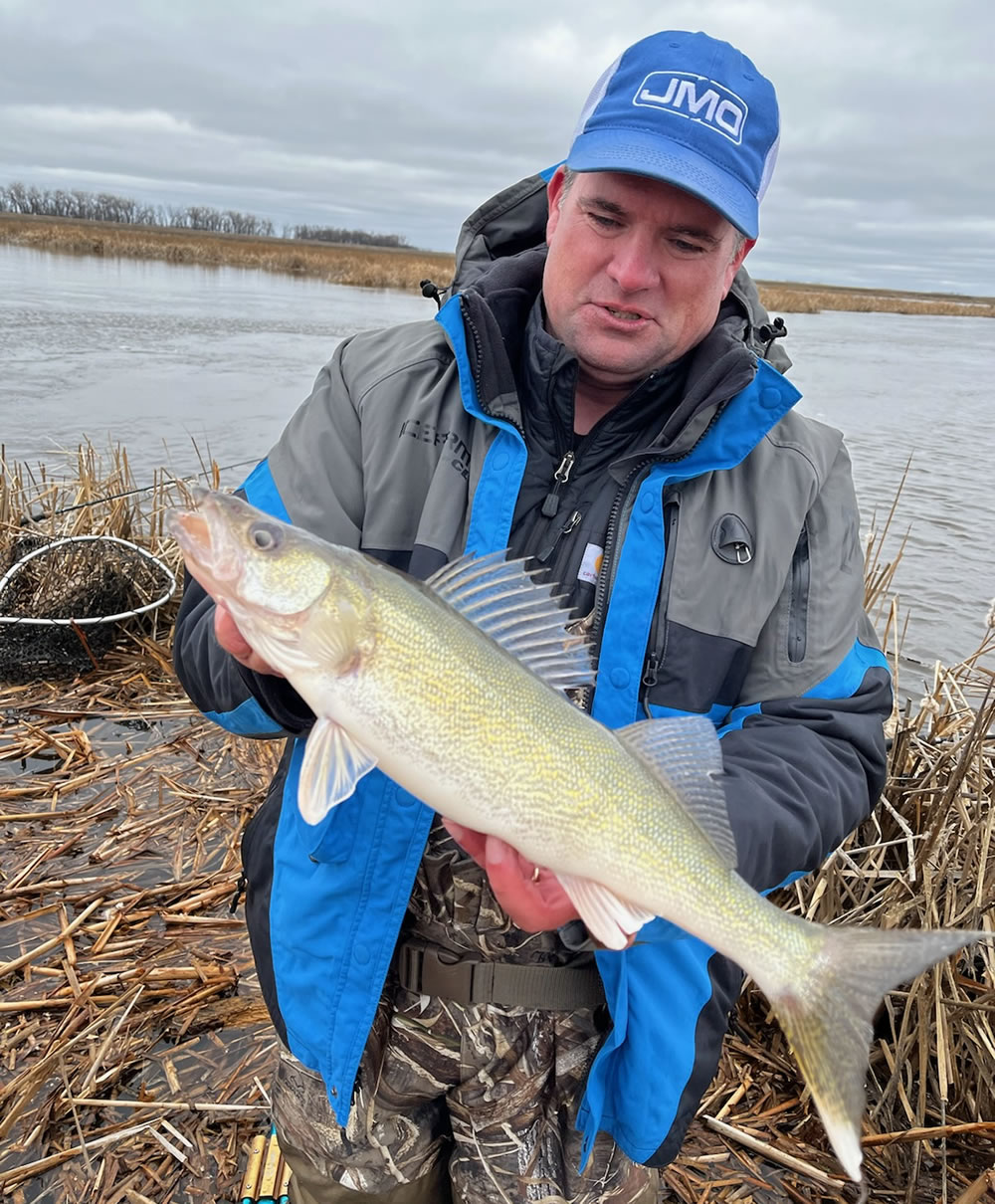 Don't own a boat or just looking to try something different? Break out those duck hunting waders, get out on the shore with a handful of crankbaits and soft plastics-frogs if you can catch 'em-and give the historical fall shore and waders walleye bite a shot! 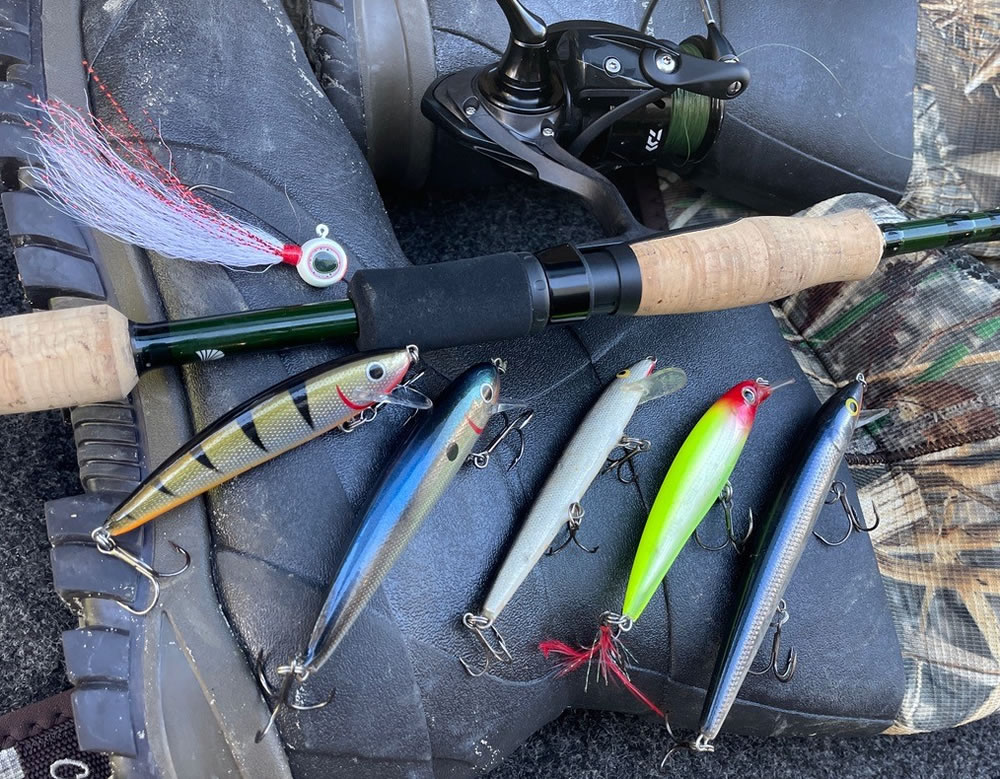