Spin Your Way to More and Bigger Crappies Now

Veteran guide and Minnesota Fishing Hall of Famer, Tom Neustrom, has chased crappies for over forty years. While better known as a master walleye stick, without any hesitation he'll tell you his favorite fish are crappies.

"I've chased crappies all my life but not like I have over the past ten years," says Neustrom. "I've found different ways to catch them and it's outside the traditional jig and minnow or vertical bait presentation playbook. There are other ways to catch lots of crappies-and some really big ones, too-especially in the mid- to late-summer. Trying to crack the crappie code really compelled me to chase these fish around. I knew there had to be a better and more efficient way to catch them than a jig and minnow, float rig, or vertical presentation. Well, over time I've discovered exactly that," notes Neustrom. 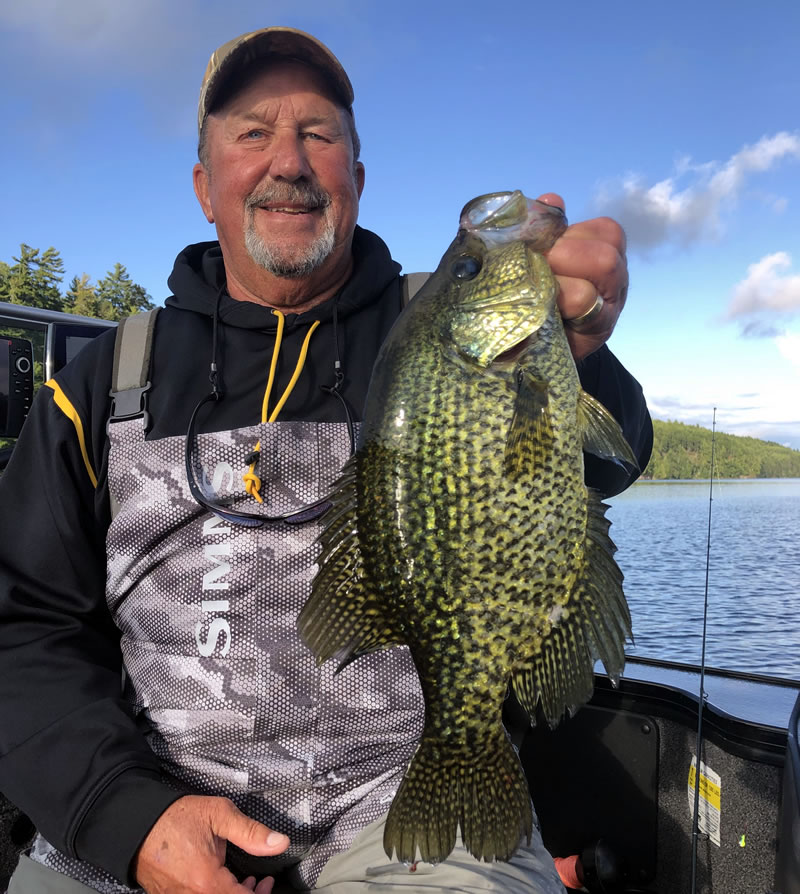 And he's learned to catch them relatively shallow in the summertime - not deep over the basins - which he says is the fun part. "I'm talking 12 feet and less. We used to throw baits at them-anything with a spinner on it like a Beetle Spin-style bait or Road Runner or any kind of action tail and swim it over the top of weeds, but it really wasn't that efficient. The thing is, you need to cover ground for numbers of big crappies."

Then, about a decade ago, a lightbulb went off in the walleye guide's brain - why couldn't you tweak a walleye spinner rig for crappies? And, through much trial and error, Neustrom's Crappie Spinner Rig was born.

"It's really an old walleye Lindy/Little Joe spinner rig that we modified for crappies while still remaining pike-proof so it can be fished in the summertime weeds," comments Neustrom. "But the rig will only get you so far. It's about fishing the crappie spinner rig in the right location. On a lot of the lakes in the Upper Midwest you have cabbage weed and what I'm looking for are scattered patches of them, not massive beds. The isolated patches seem to hold the most big summertime slabs. The cabbage should be within two to three feet of the surface. You want that space on top. Crappies don't sit at the bottom of the cabbage; they sit mid-height or up on top, and I can see them on my Humminbird Helix 12. I'll go into areas and look for the weeds and fish first and then set up the troll. The technique would also work well over brush piles in the South but I'm still waiting on feedback from my Southern fishing buddies," notes Neustrom.

"The way the rig is set up, speed is very critical. We're trolling 1.25 mph to 1.6 mph and would say the medium would be 1.4 mph, which is about the ideal speed to troll when the weeds are as I described. You can use your outboard and a drift sock to slow the boat down or do what I do, and that's use the ultra-precise Minn Kota Ulterra bow-mount trolling motor. The motor allows you to follow the contour or repeat the path with a press of the remote control. It's pretty simple," offers Neustrom. "You get a better constant speed with the bow-mount trolling motor, too. I've got a Minn Kota Ulterra 112 on a 2075 Pro V Lund and it provides constant speed."

"The rig itself is 32- to 36-inches long from hook to swivel. The line test I use is on the heavy-15- to 17-pound monofilament. It's not a finesse rig. You have to run that heavier fluoro or mono because a lot of these lakes have northern pike in them. If you're using light line you're wasting your time. With 15- to 17-pound mono you don't have as many bite-offs and spend your day re-tying rigs. It's not a finesse thing, it's a crappie trolling power technique," notes Neustrom.

On the business end of the crappie spinner rig, Neustrom is very particular about the hooks he uses on the rig. "I use a size one or 1/O Eagle Claw long-shank gold Aberdeen-style hook." I've discovered exactly that," notes Neustrom.

For bait, Neustrom likes about a two-inch fathead or chub-and small golden shiners when he can find them. He hooks the minnows through the mouth, turns the hook, runs it up into the belly and out the back. "Hooked this way, the minnow tracks straight with the spinner and stays on the hook. Sometimes, if fish are really aggressive, you can use a soft-plastic action tail like a curly tail grub or small paddletail. But usually, live minnows seem to work the best."

For rods, Neustrom uses a St. Croix 7'6" Eyecon medium light, extra fast spinning rod (EYS76MLXF). "I like a longer rod so you can sweep set the hook on the crappies, plus it gets you line out away from the boat. The bite is a mere tick so you want to drop the rod back and immediately set the hook," offers Neustrom. "I tried the system with a six and half foot rod and just couldn't get a sweeping hookset. But when I got into that 7'3" to 7'6" it really solved that problem."

With regards to reels, Neustrom opts for a Daiwa Ballistic 1000 spooled with Sufix 832 braid in six or eight pound. He runs a small VMC ball bearing swivel between the braid and the monofilament or fluoro spinner rig. "I do like using fluorocarbon," notes Neustrom. "It's just a little tougher. I tried 8- to 10-pound mono but pike kept biting through the rig and I'd have to re-tie. The thing is: on-the-troll fish aren't line shy so you can get away with the heavier stiff. This is a power approach, not a finesse deal…"

The bullet sinker is really crucial, too, and has to be small enough that it slips through the weeds and doesn't sink down into the vegetation. That typically means a 1/8- to 3/16- bullet style weight, tungsten if possible, although lead will work just fine. "Here's the other thing: You have to experiment with how much line you let behind the boat. 25 to 30 feet is ideal in more turbid waters and you can go out to 35 if the water is clear. But the longer the line, the deeper the rig is going to slip into the vegetation. Again, you can go as far as 35 feet, but that's about as far as you want to go," comments Neustrom.

Neustrom is quick to point out that he didn't invent the rig and says there were plenty of guys who were experimenting with similar mods to traditional walleye spinner rigs for crappies over the past 10 or 15 years. "I would say 10 to 12 years ago is when I started fishing this rig." 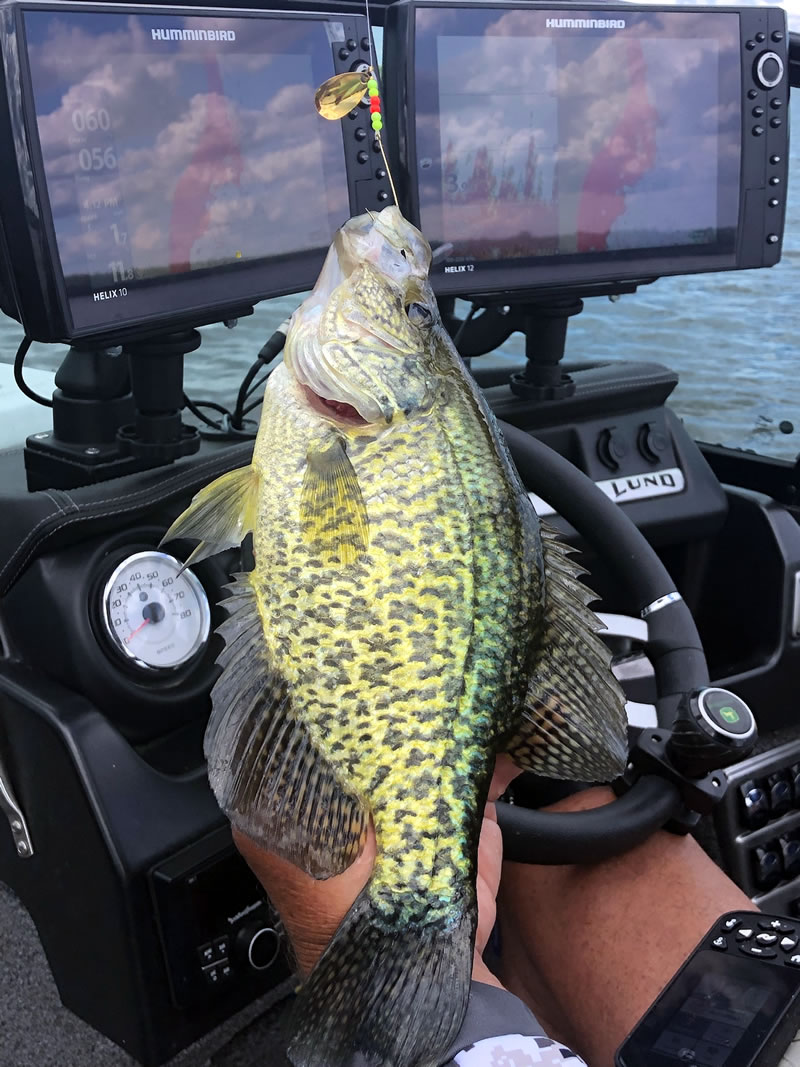 When it comes to clear and shallow water, fishing the rig can be harder to employ. "The boat can spook the crappies and if the weeds are shallow, you can't get away with it. But what you can do, is use a 1/16th ounce split shot instead of the bullet sinker. What I prefer is waters that are a little more turbid. Summer is really good because the water develops a little more color with algae and such. The thing is, the big crappies are shallow, they aren't deep-and they're still in the cabbage feeding on minnows and other forage."

For the rig, Neustrom uses a #2 Colorado or Indiana blade on a small clevis, all components available from Northland Fishing Tackle. "I like gold spinners, they're my go-to. And I like hammered gold over straight gold. It just reflects more light. I also like to put several different colored beads above the hook-chartreuse, red, yellow, gold, orange, or red and mix it up. I'm very specific about running six to eight beads above the hook and below the spinner. What it does is give you a space when the fish strikes so it doesn't interfere with the blade spinning. You get a lot more hook-ups."

"As a guide, I teach clients how to fish but also have to put them on fish, day-in, day-out. When I started doing this spinner rig it made a lot of sense. It was a lot easier to cover water. Basically, when you get into a weedbed with several fish present, you put a waypoint on your graph and you can keep trolling back and forth. This spinner rig has allowed me to have clients catch crappies in a different way. They weren't slip bobbering or throwing jigs, they were doing something different. And it's really effective. It's a good system to use all summer long. Anglers tend to believe that all the crappies are moving out deep in July and August. Fact is, they're still in the weeds; there's food there. Developing the rig, the appropriate trolling speed, etc. has proved a real fish-catcher for numbers and size of crappies," adds Neustrom. "It's just remarkable."

Looking for a way to catch more and bigger crappies? Then ditch the jigs and slip floats for Neustrom's spinner rig. You'll be glad you did…" 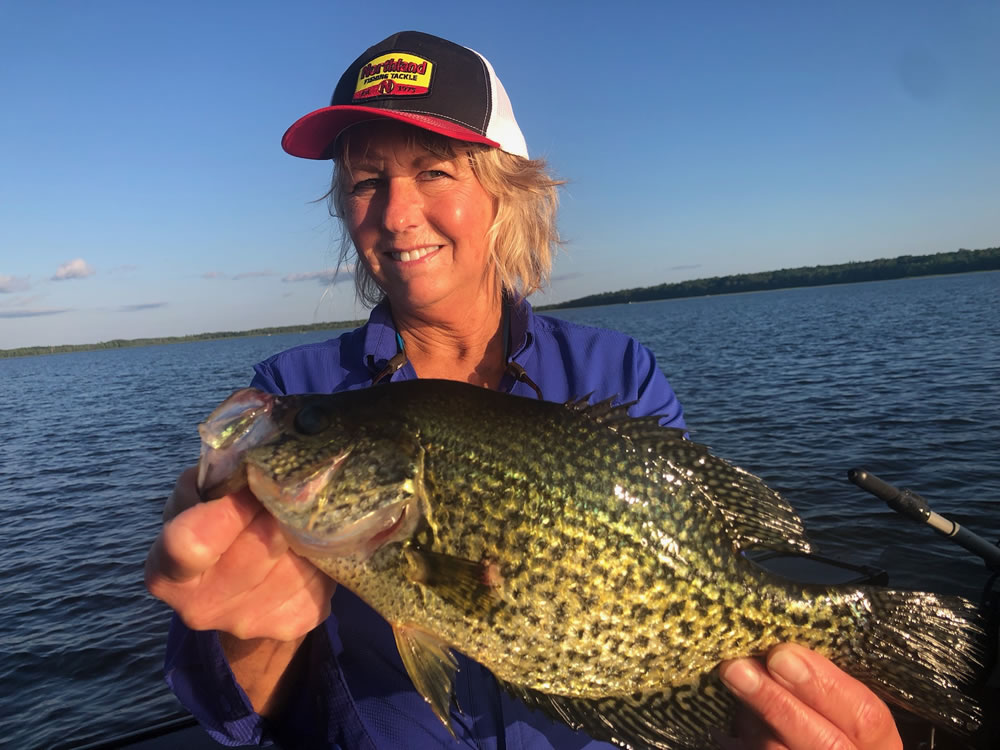