By Craig Ritchie - August 22, 2022
The Great Lakes continue to offer some of the best salmon fishing in the world. For much of the year these fish live in deep water far offshore, making them tough to catch without a big, seaworthy boat and specialized gear. But that all changes for a few weeks each year as the big fish begin staging off the tributary streams they will ascend for fall spawning. By late summer and into early fall, most of the fish are hanging around within casting distance of shore, levelling the playing field and giving everyone a chance to enjoy catching trophy fish close to home.

Get away from the crowds and concentrate your efforts from dusk till dawn to have the best success with near-shore salmon.
All across the Great Lakes, from Oswego to Duluth, this is the time to get in on the action. Finding fish is the easiest part. Local bait and tackle shops can point you to the best spots, or you can find your own by checking the Great Lakes Stocking Database at glfc.org/fishstocking/ to see where salmon have been stocked near you. The majority of adult chinook salmon return to their stocking sites after three to four years in the lake, so look for stocking figures from 2018 and 2019 to get a feel for this fall's returns. Allowing for fish caught by anglers and natural mortality, expect 5% to 10% of the fish originally stocked to return to these sites this fall.

Chinook aren't the only option, as the stocking list also reveals planting sites for coho salmon, as well as rainbow trout and brown trout. Look for coho to return to their stocking sites two years later, and trout at any time.

Most of the stocking sites will be either tributary rivers running into the Great Lakes, or harbors with public access. The reality is that the mouth of ang river or stream flowing into the lakes is likely to attract at least some fish, since a few salmon always stray and explore new waters.

Expect to find plenty of company at the sites where the largest amount of fish are stocked. If you prefer more elbow room, explore stocking sites with lower numbers of fish, since you'll often have them nearly all to yourself. 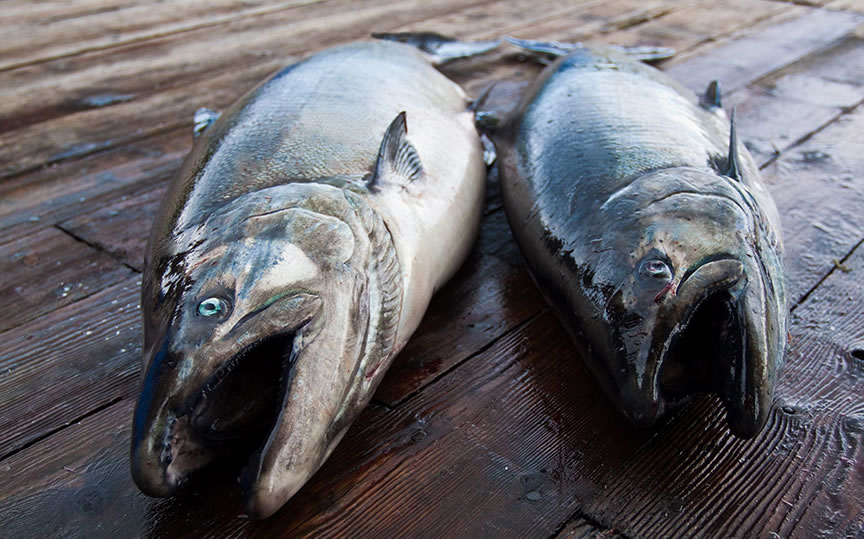 Early fall is the best time to find large salmon close to shore.

Once you've identified some potential spots, the actual fishing is about as simple as it gets - and that's the charm of it.

You're going to be casting into the lake from piers, so any rod and reel you can get decent casting distance with will work. Having said that, these are big fish and they love to run for the horizon when hooked, so larger reels with greater line capacity are a definite plus. I usually stick with spinning tackle, using 400-series reels and longer rods in the 8-foot to 9-foot range, which help eke out a little more casting distance.

If you prefer baitcasting gear, forget the compact bass reels since they just don't have the requisite line capacity. A wide-spool reel that can handle 300 yards of 50 pound braid, like a Shimano Calcutta B 400 or Abu Garcia Ambassadeur C4 is what you need, especially if you connect with a fish at the far end of your cast.

The other essential item is a long-handled net that's big enough for fish up to 30 pounds or more. The decking of Great Lakes piers ranged from three or feet to six feet or more above water level, so you're going to need some extra reach in order to land fish. 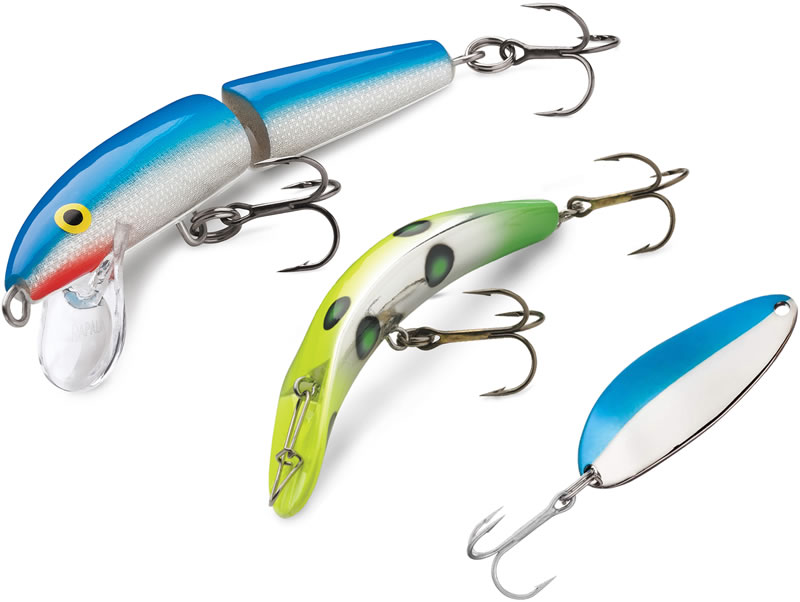 Artificial baits like (from left) the Rapala J-11, Kwikfish and Little Cleo account for a lot of salmon for pier anglers.

There are two basic approaches to catching salmon from shore - still fishing with bait, or casting with lures.

Still fishing is popular, using baits like worms that have been inflated with a worm blower or a thumbnail-sized gob of spawn held up off bottom with either a floating jig head or a miniature marshmallow. Either are fished on a sliding sinker rig, most often using a simple egg sinker that's positioned above a small split shot about two or three feet up the line from the hook. Cast it out, lay the rod down or put it in a holder, and wait. The gobies are a pain, no question, but at some point you will connect.

I prefer the more active approach of tossing lures, either spoons like the Little Cleo, or big minnowbaits like the Rapala J-11 or J-13, or a large Flatfish or Kwikfish. I find that casting saves me from dealing with the inevitable gobies and panfish, allows me to cover more water, and just better suits my temperament (I'm not the most patient guy on the planet). Apart from that, while hits on bait can be surprisingly subtle, salmon usually hit lures like a runaway train, and that's also a big part of the excitement for me.

As far as when to go fishing, two conditions that will definitely put the odds in your favour are rain and low light. Rains that deliver new smells into the lake are what entice salmon to venture upstream, so rainy weather will definitely concentrate the fish closer to shore and right into the river channels. Rains also color the water a bit, which can be a plus after weeks of hot summer weather often leave the lakes as clear as tap water. Salmon that have spent their entire lives in deep water feel pretty skittish swimming around in the shallow clear stuff, so a bit of color helps.

That's also why the best fishing is at dust, dawn, or in the middle of the night. Salmon approach the harbors to sniff them out as the sun sinks on the horizon, and tend to return to deeper water the following morning once sun penetration grown more intense. Especially early in the season, the night shift is the most productive.

Cloudy days are also a prime time to fish. A dull, overcast day that threatens rain can really stir things up underwater, so take advantage of any such opportunities that come your way.

Otherwise, there's not a lot to know. Salmon fishing from piers is easy, it doesn't require much in the way of specialized gear, and it's loads of fun, so get out there and enjoy it while it lasts.