By Craig Ritchie - August 4, 2022
Plastic worms seem to be tailor-made for fishing largemouths in August. And when I say plastic worms, I'm talking old school - big baits that are Texas-rigged on a bullet sinker. It's largemouth fishing, 1970s style.

Why live in the past? Quite simply, pegged worms still work every bit as well today as they did when they first turned the bass tournament trail upside down over 50 years ago. Of course there's been an absolute mountain of new tackle and techniques come along since, but nothing has ever managed to outgun the original approach to dredging big fish out of deep cover. 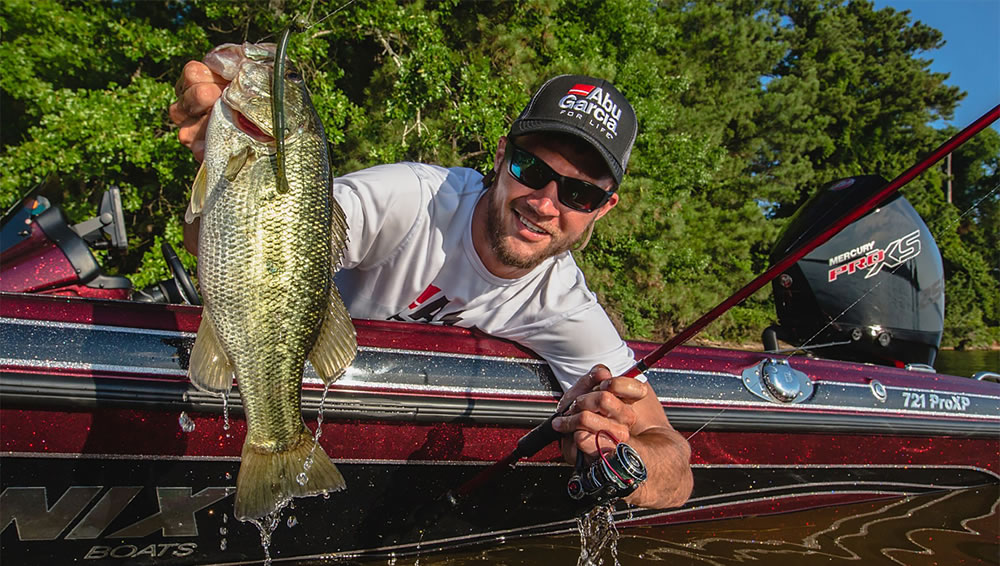 Stiff-bodies worms work best in heavy cover since they're less likely to tear and ball up.
Where I live in the Great Lakes basin, and across much of the Midwest, hot summer weather drives largemouth into heavy weeds, where they can find both shade from the sun and higher oxygen levels - along with a passing smorgasbord of little critters to ambush and eat. Catching these fish calls for slow, deliberate presentations using baits that can slip into those weeds without hanging up - exactly the conditions where plastic worms shine.

One of the greatest benefits of old school worm fishing is that it's such a versatile approach. You can flip shallow pad beds, pitch your way along weedlines in moderate depths, or probe deep weed edges, all with equal ease. Between those various scenarios, I usually prefer to dredge the deeper water - mainly because it's ignored by most other anglers, and I like having unmolested bass all to myself. So I'll usually start my day dragging bottom on the shady side of weedlines in anywhere from 8 to 20 feet of water. 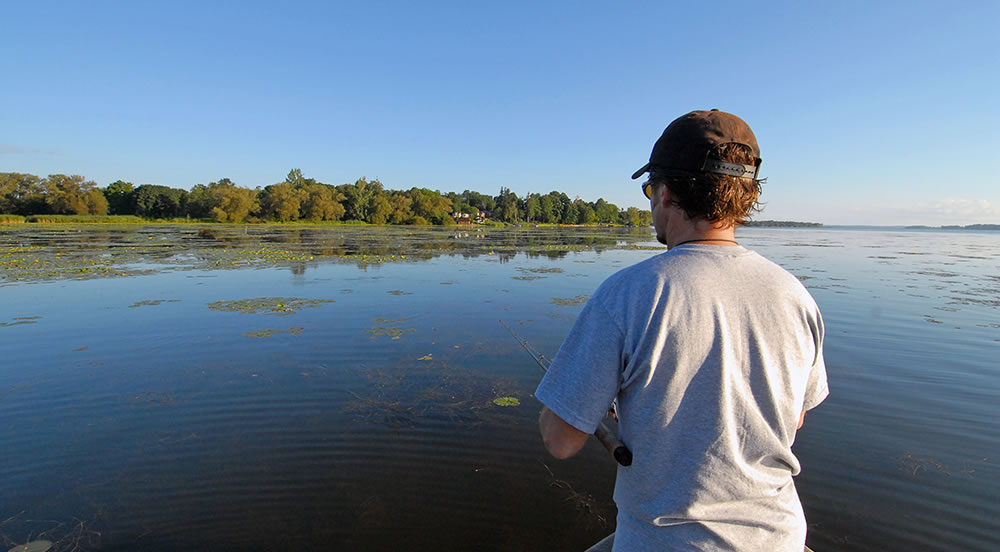 It's often easier to see hits than to feel them, so watch your line like a hawk for anything unexpected.

The reason I gravitate to an old-school worm instead of a grub, craw, Ned rig or flipping jig is simple - worms are big. They're easier for bass to spot in that jungle of vegetation, and they're a real mouthful to hold onto, which means bass are likely to gum the bait for just a touch longer, giving me more time to set the hook.

How big? Eight-inch worms have been the standard for years, but I like to go bigger than that, choosing 10-inch or 12-inch worms more often than not.

Today's anglers have it made when shopping for worms, because you can find them in an enormous range of colors, sizes, profiles and, most importantly, firmness. That's the key factor in selecting plastic baits of any sort, and one which most anglers miss. In more open areas, such as when fishing along the edge of defined weedlines, softer worms like the original Culprit or the Strike King Rage Tail work best because they feel gooey in the fish's mouth, just like the leeches they gorge on in those weedy environments.

But in thicker cover, such as when fishing small holes right in the weeds or when fishing alongside stiff weeds like rushes, firmer worms like the Berkley Power Worm or Mann's Jelly Worm (introduced way back in 1956!!) work best because they're less likely to tear, or to slide down the hook and form a loopy ball from constantly rubbing against the vegetation. A stiffer worm slides through the junk rather than balling up, so it still appeals to fish long after softer competitors have collapsed over the hook bend and begun spinning uselessly in the water. 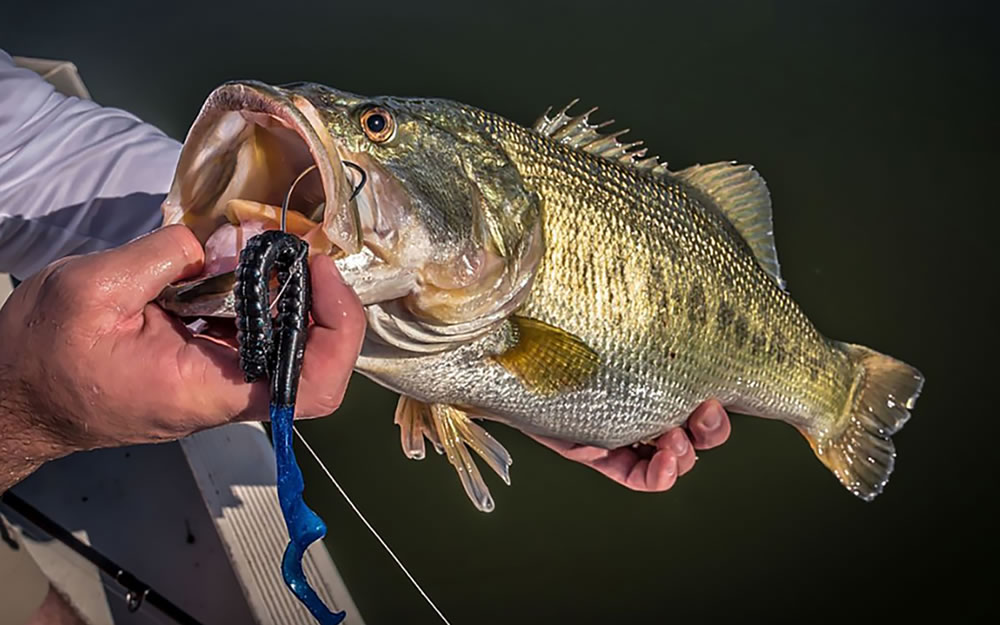 Worm fishing takes a bit of practice, but the rewards are worth it.

The Eyes Have It

Worm fishing is pretty straightforward, but it does require two things for consistent success - patience, and sharp eyes.

Patience is key because by its very nature, worm fishing is slow and systematic. Start at the outside of the weedlines and very slowly pick your way along, poking that worm into every opening, every point, and every break in the vegetation. Either the bass is there, or it isn't - there's no waiting them out in this game, you keep moving along, dropping your bait into hundreds of potential spots over the course of a day. You have to stay focused, and remain on high alert for a long period of time. That takes real focus and serious concentration, but the rewards are worth it.

The sharp eyes bit refers to the simple fact you're more likely to see hits than feel them. Bass in heavy cover don't slam into a worm the way they crush a crankbait or a top-water lure. They just pick it up and gently gum it. When you have 20 or 30 feet of line running through heavy cover, that gentle response is not the easiest thing to feel. Running the line over your finger, rather than relying on the rod blank to convey the message helps, but with practice you can usually spot hits you won't feel by simply watching your line.

As you fish a spot, you'll see the worm move over bottom in a fairly rhythmic pattern. What you're watching for is anything that interrupts that. A quick flick in the line, or any sign of lateral movement is your cue to set the hook hard. 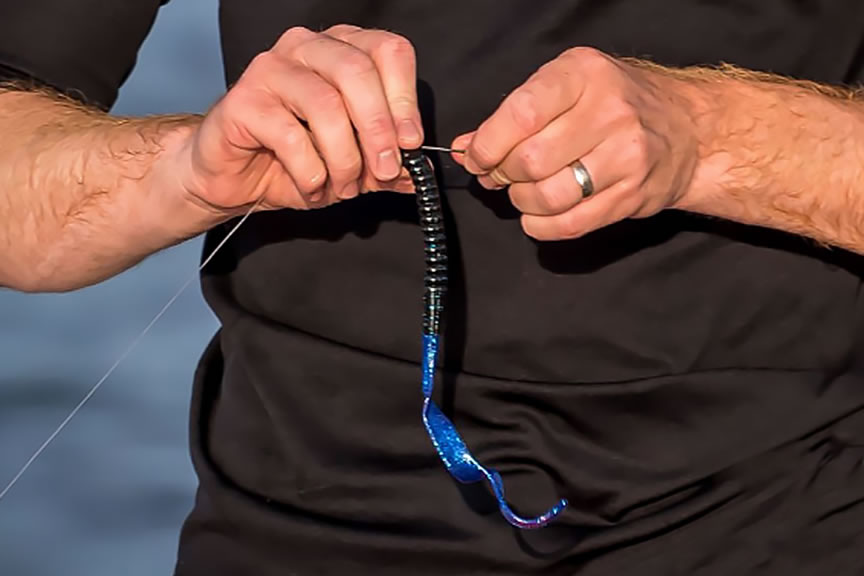 The author prefers big worms in the 10- to 12-inch range, since even small bass won't hesitate to gobble them up.
Sometimes the hits will be signalled by things you don't see. You're gently lifting and dropping the bait along that weed edge, and then it just seems to hang there - you don't see it drop back to bottom like you expect. Set the hook!

Dredging the bottom with big plastic worms is very much something you develop a feel for. It takes time and patience, but it catches a lot of fish, and at a time of year when the classic approaches become less and less effective.

Want to catch more big largemouth this August? Turn back the clock and dredge bottom with worms. There's a reason it's been the tournament standard for more than 50 years.