By Bob Jensen - July 15, 2022
Crappies are one of the most popular fish species across North America. Because they're usually a schooling fish, when you find them action can be fast. They'll respond to a variety of presentations, and they're great on the table. And according to Mr. Crappie Wally Marshall, crappie fishing in many areas is getting better because of regulations that protect the fish a bit. In some areas a crappie has to be ten inches to keep, in other areas they must be twelve inches before you can take them home. No doubt, crappies deserve some attention in the summer. Following are some ways that you can give them that attention.

Earlier in the year, anglers were chasing crappies in shallow water where they were spawning. As we get into the summer months, crappies will move out of the shallows. If we want to keep catching them, we need to fish where they are. In different bodies of water, they can be found in different places.

In the spring when the crappies were shallow, oftentimes you could see them. Many anglers just cruised the shallows looking for slab-sided fish. When one is spotted, a bait is put near it. After it's caught, you move along to the next one. 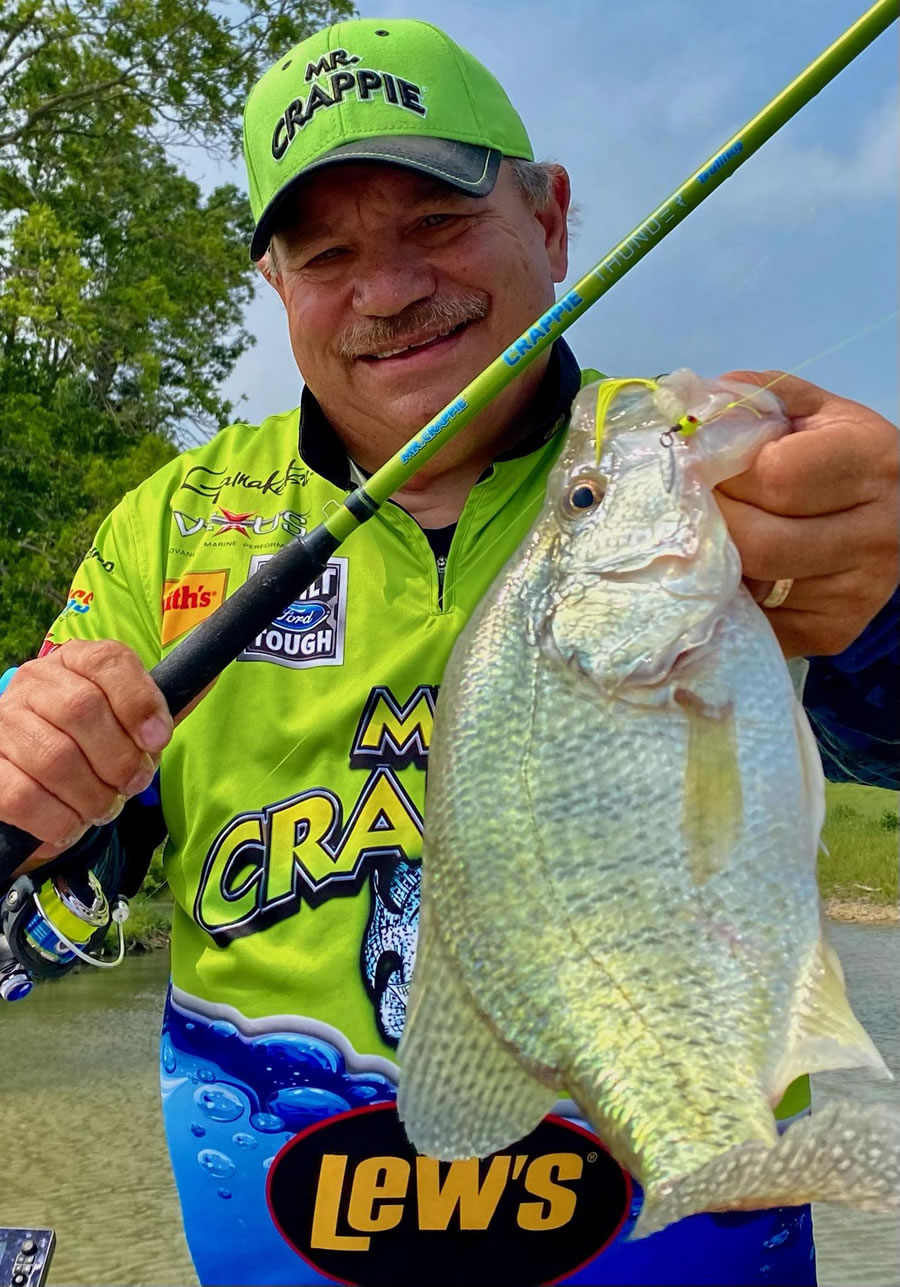 Mr. Crappie with a summertime friend.
In the next few months, you're probably not going to be able to locate them with your eyes, but in some situations you can see where they might be, such as under docks. In other situations a sonar unit will reveal the brushpiles that they'll be over and around. And, in some lakes they'll head to the basin of the lake and spend the summer and fall there.

One of Mr. Crappie's favorite ways to catch crappies in the summer is by "shooting" a jig under a dock. "Shooting" is usually done with a sixteenth ounce jig tipped with plastic and fished on a spinning rod. Hold the jig between your thumb and forefinger. Open the bail on the reel, pull the jig back so the rod loads, then release the jig so it "shoots" under the dock. This requires some practice, but you'll quickly get the hang of it. Shoot the jig into the shaded areas of a dock that's in deeper water and you'll quickly learn if there are crappies present. A Shadpole plastic works well for this technique because it skips well. It will skip several times on the surface before it sinks, which allows it to get farther into the shade. Mr. Crappie has some videos on the internet that show how to shoot a jig.

In other lakes and especially reservoirs, summertime crappies will be found near sunken brushpiles and flooded timber. Determine how far down the top of the brushpile or timber is, then swim a jig over the top of it. Again, a jig/plastic combo will work well, but if the fish are being stubborn, try a hook or a jig with a live minnow under a slip-bobber. If the crappies don't eat that, try another spot.

In many natural lakes across the Midwest, crappies will spend much of the summer along deep weed edges or they might move to deeper water. Those deeper areas can be points extending from the shoreline, sunken islands, or just the basin of the lake. If there appears to be no bottom structure that's holding the fish, they're probably there because that's where their food is. In the summer, fish of any specie will be wherever food is available. Again, for most crappie anglers, a jig/plastic will be the first choice of presentation, a jig/minnow will be tried if the fish are finicky. In deeper water, go with an eighth ounce jig, and when you catch one, get your bait back down to the fish as quickly as possible.

Last thing: As is usually the case, Mr. Crappie suggests a natural looking plastic for clear water and brighter colors in stained water. Hot Chicken.com and Refrigeration White are two of his go-to colors. For the next few weeks, if you put this set-up near a crappie in the summer, your chances of getting bit are very good.