By Bill Schultz - June 1, 2002
Wisconsin is blessed with an abundance of tremendous smallmouth bass waters. A few friends and I have identified some of Wisconsin's top smallmouth hotspots. 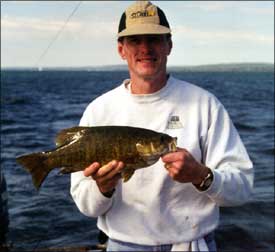 In Madison, Lake Mendota is becoming one of the best smallmouth lakes in the state. Eric Walls (608-246-1876), a top Madison area guide, tells me, "Lake Mendota is a great smallmouth factory because of the amount of unfished water and, the 18-inch, one fish, size limit." When hunting these big Mad-town smallies Walls says, "I look for the several points and rock bars off of Picnic Point, Second Point, Dunns Bar, Brearly Street and Tenney Park." He also targets any large rocks he can find, steep drops, fish cribs and weed pockets.

Walls notes, "In the spring when the fish are shallow I rely on spider grubs and tubes. In summer, when the fish are deeper and on the weedlines I go to heavier jigs and large crankbaits." In the fall Walls says, "You won't catch quite as many, but you will catch some dandies."

Walls told me that on a decent day you can expect to catch 10-20 smallies, averaging 14-18 inches, with trophies up to 23 inches and 5-7 pounds very possible.

Lake Mohawksin
Lake Mohawksin is a dammed section of the Wisconsin River near Tomahawk, and according to Steve Huber (715-362-3857), a top northern Wisconsin guide, a great smallmouth location. Huber noted, "With over 1,300 acres and the fact that the smallies don't get as much attention as the walleyes and muskies, there's a large population of 17-20 inch fish." He told me this is changing a little, but not enough to make a difference.

"There are plenty of baitfish and crawfish for the bass to feed on and get fat," Huber says. "Mohawksin is a little odd for smallmouth in that they act more like largemouth at times, relating to weeds as well as the more typical smallmouth cover."

In springtime Huber likes to use 4" finesse worms from Mesa Tackle and Mesa's 3" tubes in motor oil, watermelon and pumpkinseed. In summer Huber uses Secret Weapon spinnerbaits, Husky Jerks, buzzbaits, Zara Spooks and Chug Bugs and in the fall he uses the same lures, just with a slower retrieve.

When asked about expected fish size Huber said, "Last summer I caught a 20 ¼ inch smallie that didn't even place in the weekly fishing contest at Aquatic Bait/Tackle."

Oconomowoc Lake
Oconomowoc Lake, just east of Oconomowoc, is easily bypassed according to Eric Catlin (414-546-0887), seminar speaker and guide. Eric says, "Fishing here can get downright lonely at times, but that's all right." Catlin tells me a 30-fish day is not all that uncommon, with the fish averaging about 15 inches, but he noted, "There are plenty of 3-4 pounders and I've caught hawgs approaching six pounds."

In the ultra-clear water, the smallies are generally found cruising shallow weed flats. Catlin says, "Weeds are at a premium. The heavier, taller beds that grow near the drop-offs are hiding muskies and pike, which tends to push the smallmouth up onto flats." Catlin's go-to presentation is to approach these flats from upwind and throw unweighted tubes as far as he can to prevent spooking fish. He says that if you feel any resistance, set the hook. Most clear-water presentations will work on Oconomowoc Lake.

When looking for smallies, Terry says, "Try weedy areas broken up by rock piles, fish out and away from points for suspended fish." Fishing smallies on Okauchee is based on their forage. He notes that, "Early and late in the season look for them to be chasing baitfish. During this period try using small crankbaits, finesse worms and twister tail grubs over open water." A jig and crawfish color tub or hula grub seems to work when the smallies are relating to areas holding crawfish.

Terry tells me, "Most smallies on Okauchee run between 12-15 inches, but I've caught a number over 20 inches and two 25 inchers." In decent conditions, and knowing what you're doing, a 10-15 fish day is common, with 30-50 fish days possible in the fall when they put the feed bag on. He says, "The number one reason people fail to fish Okauchee well is their unwillingness to fish an area well. Remember, this lake gets a great deal of pressure so a slow finesse approach usually works best."

Fever and Platte Rivers
These rivers are a couple of my favorites. Both wind through rolling farm country in Southwest Wisconsin. The Fever is in La Fayette County and the Platte is in Grant County. They are ideal for walking and wading, but can be navigated with a canoe or kayak. From late spring through early fall my favorite presentation is using one of my St. Croix light action rods, 4 pound Excalibur line and Rebel's Teeny Wee-Crawfish. Sometimes this is the only lure I take with me, and I've had many 30- to 50-fish days. One reason light gear is important is that the fish tend to be smaller, in the 8-12 inch range. An occasional 15-20 incher is possible, with my biggest at almost 4 pounds.

Also productive on these rivers are smaller tubes in natural colors as well as Gary Yamamoto Senkos Texas-rigged with no weight. I use the 3- and 4-inch versions and just let them tumble along the bottom, pushed by the current. Like the Teeny Wee-Crawfish, smallies love them. Your arsenal should also include small jigs with plastic grubs, as well as small spinnerbaits and in-line spinners. As with most rivers, look for rocks, current breaks, the tailend of faster water and downed trees. 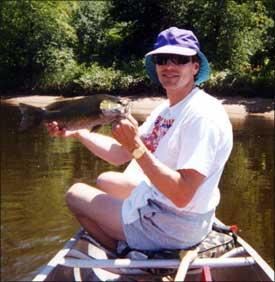 The Mississippi River probably makes the list of smallmouth hotspots for a number of states. Paul Strombeck, an experienced Mississippi River smallie fisherman, tells me, "I've fished the river from Victory, Wisconsin, to Hastings, Minnesota, and the entire section offers quality smallmouth fishing, but my favorites are Pools 4 and 5 near Alma." These pools have an excellent forage base of shad and crawfish.

Stombeck says, "My favorite time of year is from mid-June through mid-July. The smallies are typically feeding on shad with fish stacking up behind and adjacent to current breaks, waiting to attack groups of shad as they pass by." At this time of the year he likes to concentrate on current breaks, rip rap washouts, points at the confluence of running sloughs, wing dams and even navigational markers. Strombeck notes, "The best lures are shad and pearl colored soft jerkbaits, silver bodied smoke backed tubes, small crankbaits in shad or crawfish patterns and ¼-ounce spinner and buzzbaits." He's discovered some of his best spots by keeping his eyes open for leaping shad that identify an ambush spot not easily visible from the surface.

During early summer Strombeck has experienced 15-30-fish days on a regular basis with the average fish 13-16 inches with 3-4 pounders common. He said, "From April to the end of May you should look for more slack water areas just off the main channel that have or are adjacent to flat, firm bottoms suitable for spawning. Small jigs with plastics work great. From mid to late summer I fish a little deeper and use crankbaits near closing and wing dams."

Peshtigo River
This beautiful river is great for floating and wading. Closer to Green Bay, you can use a larger boat. From Peshtigo to the bay you can expect great action. You can't go wrong with small crankbaits like the Teeny Wee-Crawfish, spinnerbaits and topwaters like Smithwick's Devil's Horse. Look for all the typical river hotspots like the tailend of fast water, laydown trees, rocks and deeper holes. Tubes in natural and crawfish colors work great in deeper and slower water and don't forget about using a Texas-rigged Senko.

The water is clear, so be sure to wear your H3O polarized sunglasses to spot structure that holds fish - or to avoid with your prop.

Northern Wisconsin River
Steve Huber says the Wisconsin River above Rhinelander's Boom Lake is lightly fished for smallmouth, again because walleyes and muskies get most of the attention. He tells me that there are some lunkers in the stretch, and you can catch plenty of 12-19 inchers.

Like a number of the waters in this article, you'll again need polarized sunglasses, because, Huber says, "The upper Wisconsin is a sight fisherman's dream. Cast to visible structure like stumps, logs, rocks and you'll find smallies." He said deep holes also hold smallies; for lures he uses the same ones as on Lake Mohawksin. 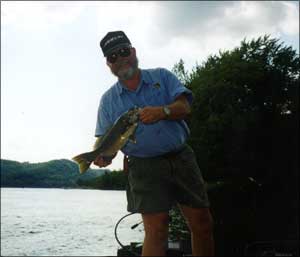 Tim Willihnganz (608-246-1876) guides the Madison area and the Wisconsin River. Willihnganz says, "The best areas I've found are from below the Castle Rock dam to the Dells, the Portage area and from below the dam in Prairie du Sac to Arena." All these areas hold good numbers of smallies.

"The reason this river is great for smallies is twofold," he says. "First, there are tons of minnows and crayfish. Second, it's a tough place to reach. With all the sand bars, wing dams, logs, rocks and strong current, it can be challenging. This is also why the river holds lots of smallies. Anything that breaks current will hold fish."

When asked about lures and times of year, Willihnganz said, "In the spring I look for slower water and use small crawfish crankbaits and tubes. In summer I look for deeper and faster water and use Zara Spooks, buzzbaits, bigger tubes and spider grubs. In fall as the smallies move towards the dams and lakes, looking for deeper, slower water I go with bigger crankbaits and bigger spinnerbaits, but slow down my presentation."

Chequamegon Bay and Door County
No list of Wisconsin smallmouth hotspots would be complete without mentioning these two world-class fisheries. For more information read my "Door County Smallmouths" article in the Lake-link article archives and Craig Putchat's "Chequamegon Bay: Big Water, Big Fish" in the article archives of www.watersandwoods.com.

The smallmouth hotspots I've told you about here are only the tip of the iceberg when it comes to smallies in Wisconsin, but these are some of the best. A good tip for most of the many great smallie lakes in Wisconsin is to get the lake map from Fishing Hotspots (715-365-5555). These maps are tools you don't want to be without.

These lakes and rivers, along with many more in our state, have tremendous smallmouth fishing. Please respect these natural resource treasures and practice Catch and Release; it will grow on you.