By Craig Ritchie - June 15, 2022
If there's one thing that's hard to beat, it's the excitement that comes from fishing with buzzbaits for early season bass, pike and muskie.

There's a lot to like about fishing with buzzbaits - they're super easy to cast, they're super easy to fish, and the hits are usually nothing short of explosive. Early summer is prime time for throwing buzzbaits, with the fish spread out in shallow water and the weed growth still low enough that you're not constantly getting caught up. 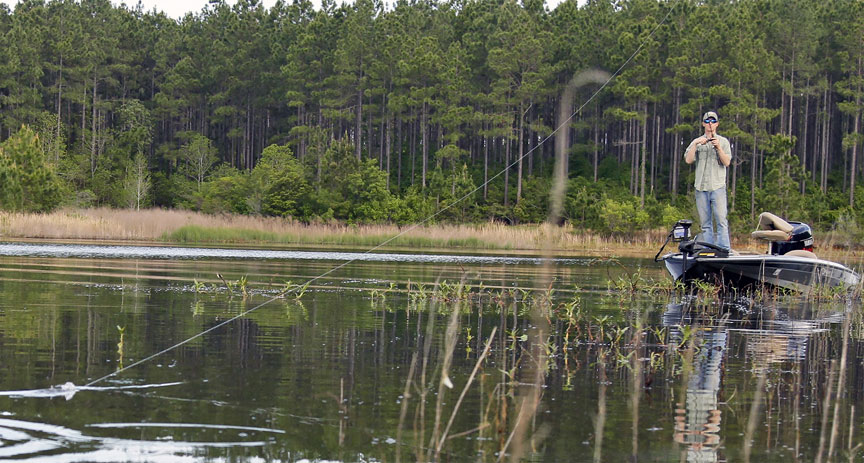 Buzzbaits are ideal for covering water before weed growth chokes the shallows.
Buzzbaits might just be the ultimate tool for covering a lot of water in a hurry, and that's a key consideration right now as post-spawn bass roam about shallow weed flats in search of food. With the weed growth still filling in, June bass haven't quite settled into their mid-summer patterns just yet. Straining shallow weed flats in three to eight feet of water is the key right now, with the number of bass you hook directly related to the number of fish that see your offering to begin with. That's exactly what makes buzzbaits so effective at this time of year. The fishing itself is dead simple.

I like to approach weed flats slowly and quietly, killing the main motor when I'm still a good distance off and fishing my way toward the weeds, fan-casting ahead of the boat as I slowly putt along with the electric motor. Smallmouth bass tend to sit off the weeds rather than in them, and I don't want to blow my chances on these fish by roaring right up to the edge of the vegetation.

Pike and muskie also tend to hang out off the weeds rather than in them, so there's even more reason to take your time and fish your way into the shallows.

Once you arrive at the weed flats per se, you just continue fan casting and shifting along with the electric motor on low speed. In the shallow water and sparser weed growth largemouth are liable to be anywhere, so cover water and keep your bait wet.

Buzzbait fishing is casting rod territory, and I prefer longer, moderately fast-action rods of around 7 feet 6 inches in length. I find the extra length helps keep the buzzbait up on top at even slow retrieve speeds, while the lighter tip of moderate-action rods makes it easier to throw lighter baits.

For reels I prefer low profile baitcasters with high-speed retrieves, which again make it easier to keep the bait up off the weed tips. Line choice is really up to you, I tend to go with lighter braid as I find it easier to cast with lighter lures. But it really doesn't matter. Much more important is your choice of buzzbait.

Buzzbaits come in a spectacular range of styles, in single or double-blade types with two, three or four leaves per blade, in metal or plastic, with clickers or without. Standard double-paddle baits like the Lunker Lure 4238 work great for all-round use, and particularly in clear water situations where you want to excite the fish but not risk spooking them. In off-colored conditions, I'll sometimes switch to a clacker-style bait like the Booyah Buzz, which has a little metal flap that clicks off the whirling blade for extra sound.

From left, Lunker Lure 4238, Booyah Buzz, Booyah Counter Strike, Strike King Tri-Wing and Strike King Premier Plus.
One of the realities with buzzbaits is that you always have to experiment to see what the fish want - some days it's burning the bait in as fast as you can turn the reel handles, while on other days they seem to want something much slower moving. When that's the case, switch to baits with more lift, which allow you to crawl along at a snail's pace while still making plenty of noise and vibration. Tandem baits like the Booyah Counter Strike, or three-leaf designs like the Strike King Tri-Wing, provide far more lift than conventional buzzbaits do. The trade-off is that the extra blades mean more air resistance, making them a bit harder to cast. But it can be a worthwhile trade-off since colored water generally negates the need to throw the bait very far.

If you really want to slow down while making plenty of fuss, side-by-side double-bladed baits like the Strike King Premier Plus are the only way to go. They're not the easiest things to cast any distance, especially into a wind, but when you want to absolutely crawl along while calling fish out of colored water or heavy cover, nothing works better.

Tune Up Before You Fish

While buzzbaits will catch plenty of fish right out of the package, I've learned that taking a few minutes to fine tune the bait goes a long way and means a lot more fish over the course of a season.

Canadian tournament pro and Real Fishing Show host Bob Izumi put me onto a great trick for tuning buzzbaits many years ago as we headed out for a morning's bass fishing. Bob had a handful of new buzzbaits with him, and as we drove along the highway on our way to the lake, he held each one out the truck window for a few minutes, the blade spinning wildly in the slipstream. When I asked, he explained that breaking in the new baits this way polished the wire shaft so the blade could spin more freely, making it more effective out on the water. 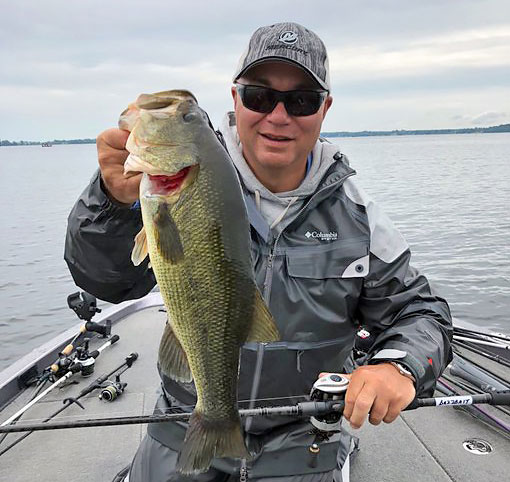 Canadian pro angler Bob Izumi tunes buzzbaits for higher performance.
What's more, after a few minutes of whirling around at highway speeds each one of Bob's new lures began making a distinct squeaking sound that it didn't have straight out of the package. Once we made it out onto the water, he proved his point by boating four beautiful largemouth before I managed a single strike. Switching to one of Bob's tuned-in buzzbaits, I then matched him fish-for-fish. There was no question that his tuned-in lures worked better, and I've made a point of breaking in all my new buzzbaits this way ever since.

June is a gorgeous time of year - the weather's perfect, the bugs aren't too bad, and big fish in shallow water make fishing a breeze. Enjoying plenty of action and heart-stopping surface hits is just the icing on the cake. If there's ever a time to break out the buzzbaits, this is it. Give it a try and see for yourself what the buzz is all about.