Troll a Jig, Catch a Walleye

By Mike Frisch - April 28, 2022
Early season walleyes are often caught on jigs tipped with minnows and pitched to fish located in shallow to mid-depth waters. Other fish are caught by those fishing slip-sinker livebait rigs, the classic Lindy Rig. Another method, however, is one that doesn't get as much attention, but often "gets" just as many fish! The method is jig trolling.

Jig trolling might also mean jig drifting depending on wind speeds on a given day. Regardless, a light jig is baited with a minnow, pitched a good distance behind the boat, and then fished subtly as the wind or trolling motor moves the boat along and through likely fish-holding spots. As the boat moves, the jig is subtly pulled forward and then allowed to fall back before being pulled forward again. Often a walleye bites as the jig falls back and may not be felt until the angler starts the next sweep forward. In that case, it's time to set the hook! 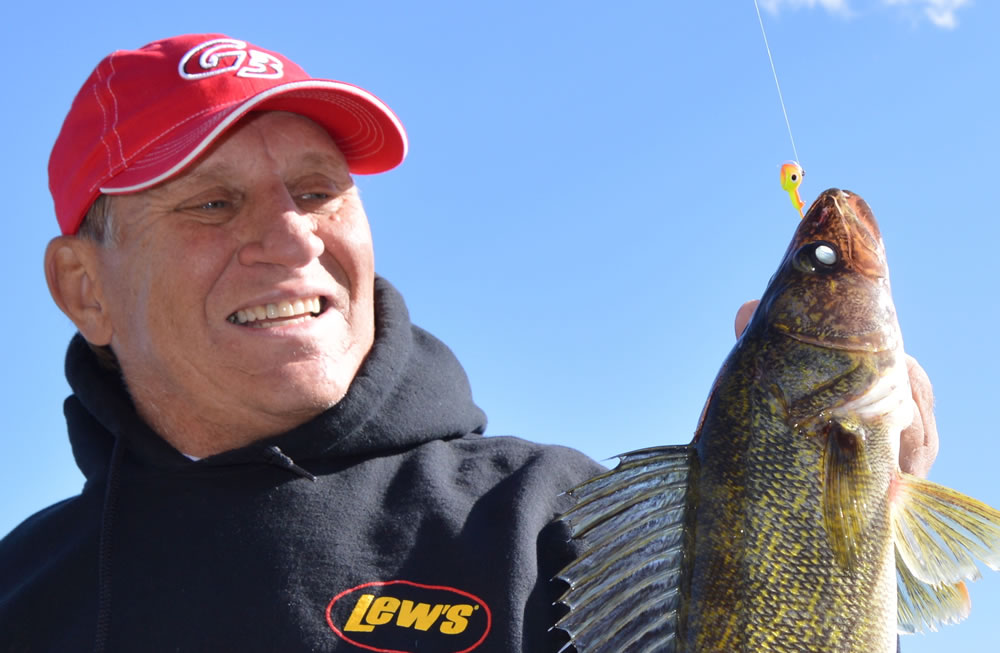 Here's a nice walleye caught by trolling a jig.
"Likely" spots to employ this tactic include drop off edges where flats give way to deeper water or other likely spots might be right up on the flat itself. Early in the morning, late in the day, or when the wind blows, hungry walleyes often gather on structure on flats looking to feed on minnows gathered there. That structure might be emerging weeds, gravel spots, or even slight bottom indentations. Other times, maybe the middle of the day or when a front passes through, might mean walleyes holding in deeper water along the drop off edge.

Regardless where the fish are, the only thing that changes may be jig size fished. When trolling flats in say 5 to 8 foot, a light 1/16 ounce jig often works. If, however, a bit deeper water is targeted or maybe the wind picks up, then a 1/8 ounce size gets the nod. If the lake being fished has a good population of spot-tail shiner minnows, a "shiner lake" as I call it, then it's wise to use shiners as bait. Other lakes, often those that are maybe smaller and shallower, have fewer shiners and here fathead minnows work just as well, maybe better.

Two questions often asked by those new to this technique involve boat speed and length of line out. I don't have exact answers to either, but often moving around the .5 to .8 mph range seems "about right." As for line length, I like to make a long cast, allow line out as the jig sinks, and then engage my reel and start fishing. If bottom is never encountered, I'll let more line out, while if the jig hangs up regularly, I reel up a bit.

Another question asked about jig trolling involves line selection. I've trolled jigs successfully on monofilament, braided lines, and on fluorocarbon. Lately, I've settled on fluorocarbon and have been using the new CONTRA line in 6 pound test. This line has a bit of stretch so the bait has a nice, natural action as it moves in the water, which is not always the case with low stretch braid. Yet, fluorocarbon has less stretch than mono, so this line yields positive hooksets when "longlining." Plus, it's nearly invisible underwater so fish in clear water don't see it.

Trolling light jigs is a "feel" game, so a light, sensitive rod in the 6 ½ to 7 foot range is ideal. Lew's has a 6'10" spinning model in their Speed Stick walleye series that is perfect for jig trolling. It's sensitive for feeling even the slightest of bites and it's length provides the hook-setting power needed when fishing with a long line. Lately I've paired this rod with the new HyperMag Speed Spin spinning reel which has a silky smooth drag. This lightweight combo is a pleasure to fish with and has proven to be a great jig trolling set up.

If one of your sought pleasures this spring is a walleye pulling on your line, consider jig trolling. Using the techniques just shared may, in fact, have you in "walleye gold" on opening day and beyond!

As always, good luck on the water and remember to include a youngster in your next outdoors adventure.