An angler can drive an hour and be on open water, or that same angler can drive an hour in a different direction and be on the ice. This is a time of year when some anglers decide to go ice fishing, some hook up the boat and head for open water, but many anglers, me included, are putting the ice fishing gear into storage and taking the open water equipment out. Following are some ideas on this in-between season. 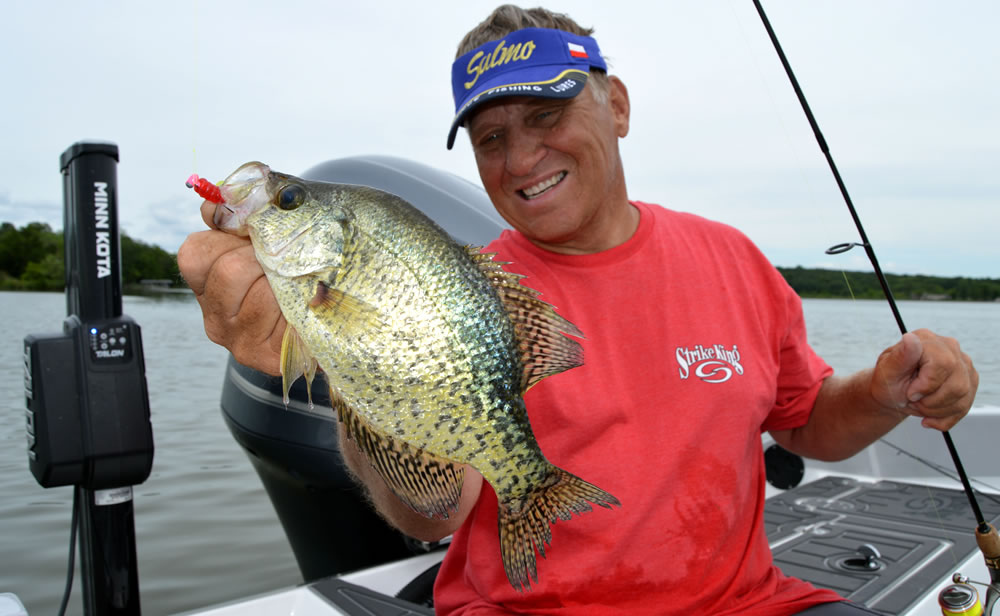 Crappies are on Mike Frisch's target list every spring. He catches lots of them, and some real slabs. Keep the medium sized ones and put the big ones back.
First and way most important, don't push the ice fishing too hard. If you're not absolutely sure that the ice is safe, don't go out. I've had the bad judgement to be on the ice twice late in the ice season when I shouldn't have been, and both times we truly wondered how this adventure was going to end. When we hit the ice in the morning, it was pretty safe. When we left in the afternoon, it wasn't. We made it to shore safely, but the bottom of the truck was much wetter than it should have been. Make sure the ice is safe.

If you're storing your ice gear, make sure there are no scraps of candy bars or sandwiches in your shelter. Mice will find them. Make sure the battery on your sonar unit is charged and that your baits are stored in a dry container to prevent rust.

If you're preparing to get on open water, start the year with fresh line. So much of the time we neglect the line that we're using only to remember that we should have changed it right after the big one breaks off.

For many Midwest anglers, our first open water trip will be for either walleyes or panfish, although bass are quickly gaining in popularity in many areas. When walleyes are the target, jigs tipped with plastic are catching more of them every year. That's because more walleye anglers are using plastic, and that's because walleye anglers have learned that walleyes will often be very willing to eat a jig that has plastic threaded on it. The traditional action tail grub is a walleye catcher. The Rage Grub comes in a four inch size and has a good sized body. In the stained river water that is so common in the spring a bright Rage Grub can be very productive. The big body and flapping tail help walleyes locate it better in the stained water. When clearer water is encountered, try a smaller Rage Swimmer. It has less tail action, and that's usually better in the clear cold water of spring.

In some states, panfish, especially crappies, are what most anglers chase early in the year. In some areas walleye season isn't open yet, but even where it is, getting after crappies is a wonderful way to spend a warming spring afternoon. They're willing biters, and if you're interested in a couple of fish for the table, crappies are hard to beat. Find a bay that has warmer water than the surrounding area and some cover. Boat docks, trees laying in the water near deeper water, reeds, they'll all attract crappies. Try a Mr. Crappie Tube on a sixteenth ounce jig under a bobber. That will usually get them to bite, but if it doesn't, replace it with a small minnow. If the bobber doesn't go down within a few minutes, try a different spot: No one's home.

A warm sun and birds chirping along the shoreline are enough reasons for many of us to get outside during the first warm days of spring, but the possibility of catching a few fish makes it an even harder temptation to pass up.