By Mike Frisch - March 4, 2022
There is a fishing pattern that emerges in March that is one of the most productive of the entire year and maybe one of the most overlooked too. The pattern involves bluegills and crappies at "last ice." During this time, many of these fish are vacating deeper water mid-winter haunts and heading shallow preparing for their spring spawning rituals but also putting on the feed bag as well.

Not only is this an oft-productive pattern, but it's also a great way to fend off the cabin fever many of us who love being outside are feeling right now. In fact, nice days out on the ice drilling holes and searching for aggressive panfish is one of my favorite ways to spend a March day. Battling aggressive, biting bluegills and crappies almost seems like a bonus when the sun shines and the thermometer rises in March and I can be outside! 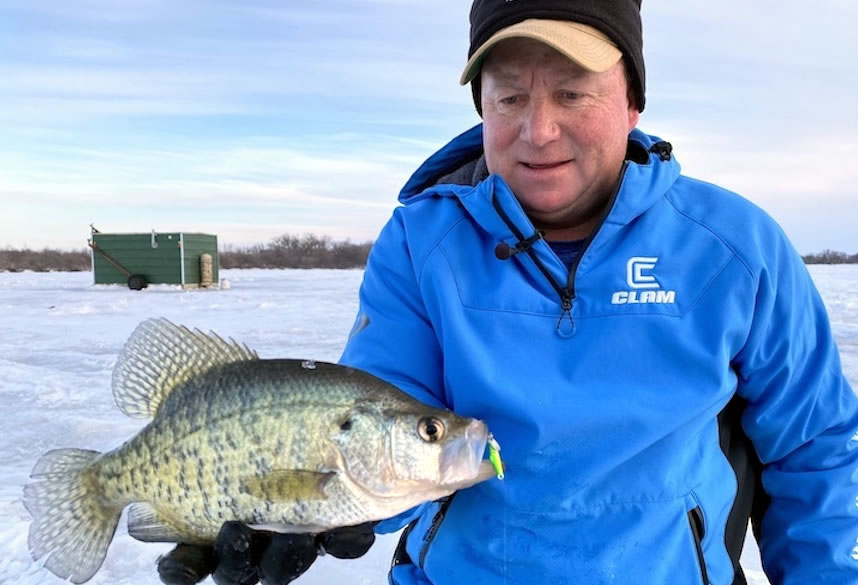 Another good thing about panfish now is their locations can be fairly predictable. The mouths of bays known to hold bluegills and crappies during the first open waters of spring are prime areas to check. These fish will be feeding and later spawning here and often "stage" on the drop-off edges leading into these bays during late ice anticipating spring and open water feeding opportunities.

When targeting potential areas, I drill holes on drop-offs looking for fish but also for weeds, especially those showing signs of life. Green weeds along an edge leading to a spawning bay can holds lots of panfish during this time.

Drilling holes in likely areas will usually reveal some crappies and gills, fish that can be caught with standard ice fishing methods involving small jigs. For me that means a small tungsten jig tied to light line and tipped with a small Maki plastic bait. This set up is fished on a "noodle" rod and inline reel combo.

Jigs made of tungsten are denser than their lead counterparts meaning they fish "heavier." A small, yet heavy jig appeals to panfish with its miniscule profile, yet "crashes" through fishing hole slush and weeds on the way to the fish. Another tungsten advantage is that their quick fall rates quickly gets baits back down to aggressive panfish once one has been caught from a roaming school.

The Drop Jig XL with its bit bigger hook is my late winter choice. The bigger hook accommodates plastic baits well and is also good during a finicky bite when I may want to load the jig with waxworms. The jigs also come in various sizes and a variety of "fishy" colors.

My rod and reel set-up for fishing small jigs consists of a light-tipped Scepter Stick noodle rod that helps me see bites and an inline reel loaded with 3-pound line. Inline reels can be adjusted to match a jig's drop rate to the aggressiveness of the fish and also reduces line twist and a spinning jig that might spook panfish!

The last equipment item needed for late ice panfish success is a good winter sonar unit with top target separation. The Vexilar flashers I use have target separation that easily allows me to "see" individual fish, weed stalks, and my bait and maximize my catches.

Maximizing your ice fishing catch yet this season is very possible. Head to a good panfish lake, employ some of the tactics just shared, and be ready for some aggressive late winter panfish to pull back!