By Bob Jensen - February 16, 2022
It may not look like it or feel like it, but it's that time of year when some ice anglers start thinking about the end of another ice fishing season. In the southern stretches of the ice fishing belt, the end of the season bite might already be going on, and if it isn't, it will start soon. In the northern regions where people fish through the ice, the season can run into March. I've been ice fishing later than that a few times, but we've got to know when to say enough's enough when it comes to safety on the ice. And, although the season is winding down, many ice anglers look forward to this time of year. There are several good reasons why they do so. Following are some of those reasons.

First reason and best reason. The bite can be good. Really good.

Next, the weather can be nice. Really nice. There are times when the wind is calm and the sun is shining and it's a warm day. You'll be out there in a light jacket or a hooded sweatshirt, jeans and bibs: That's all you'll need to keep comfortable. Those are days that I and lots of ice fishing friends look forward to. Wear some sun screen. 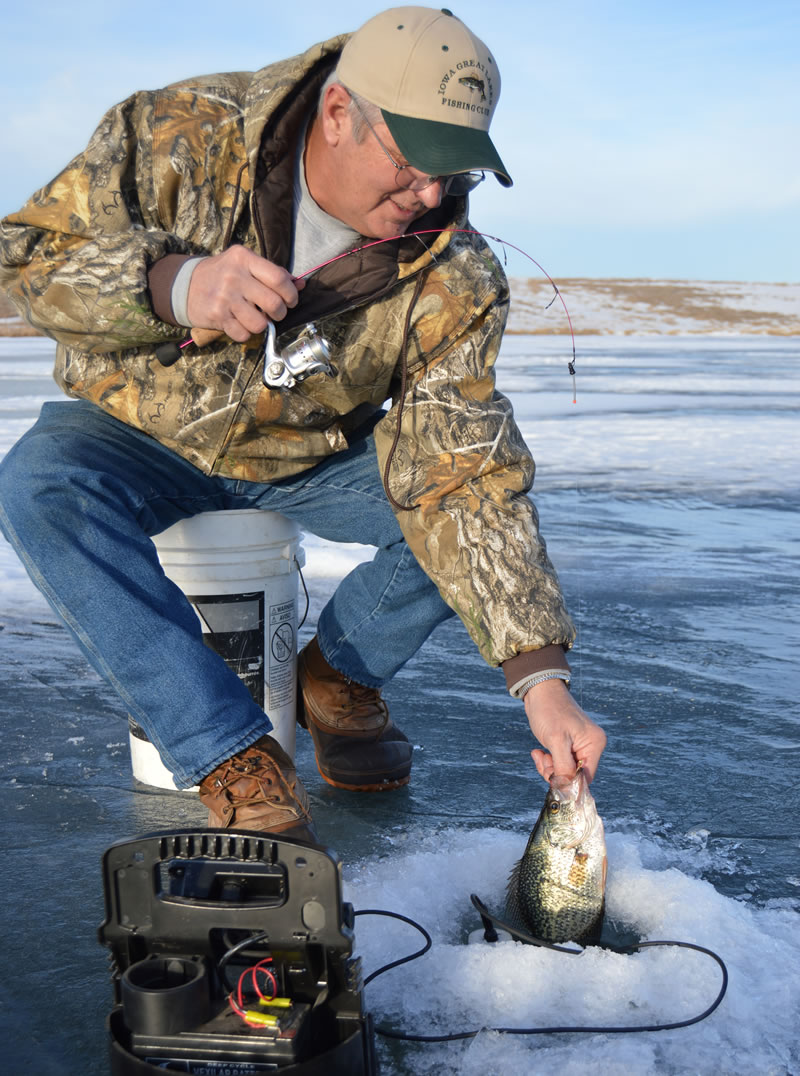 When the weather starts to warm, get on the ice if you can for some potentially fast fishing.
In some states or areas within some states, panfish will be the quarry. In those regions, walleye and pike will be off-limits to ice-fishing, but you can still chase perch, crappies, and bluegills. The fish might bite all day, but that early and late bite can still be the most productive. Be out there all day if you can, but if you can only get away for a few hours, make sure some of those hours are when the light is lower than mid-day, especially if you're on a clear water lake. In stained bodies of water, light isn't as critical, but it's still a factor.

When the fish are as aggressive as they can be at this time of year, use an aggressive approach. Keep moving to different holes until you find biters, and use an aggressive action on your bait, at least until the fish show up on your sonar. If perch or crappies are what you're after, start with a small or medium sized Tikka Mino. Work it aggressively to get their attention. If they look but don't eat, slow the action down. If they still don't eat, get their attention with the aggressive action, then when they appear on your sonar, show them a Drop Jig with a spike, waxworm, or plastic. If they still don't eat, move to a different hole where maybe the fish won't be so fussy.

I spend a good amount of time kneeling next to the hole in the ice that I'm fishing at this time of year. That's when I really appreciate Rise or Edge bibs. There can be a lot of slush around the hole, and these bibs provide protection from the slush.

I'm traveling light during late ice season. A drill, sonar, rod/reel combo and a couple of small boxes of baits. That's all that is needed much of the time for ice fishing success late in the season.

In the upcoming days and weeks, when a warmer weather system arrives in your area, if at all possible, get on the ice. Your chances for catching fish are good, and just being outside in that warmer weather can be invigorating. This action is coming soon. Make sure the ice is safe. If it is, get on it and catch some fish.