By Bill Schultz - February 7, 2022
As someone who has maintained a fishing log since rekindling my interest in fishing in 1992, you'd probably expect that I weigh my bigger smallmouth bass. And, you'd be right. Having caught and released over 24,000 since 1994, I have a good idea of how much most smallies weigh, yet I do like to confirm size when I think they are at least four pounders or bigger. 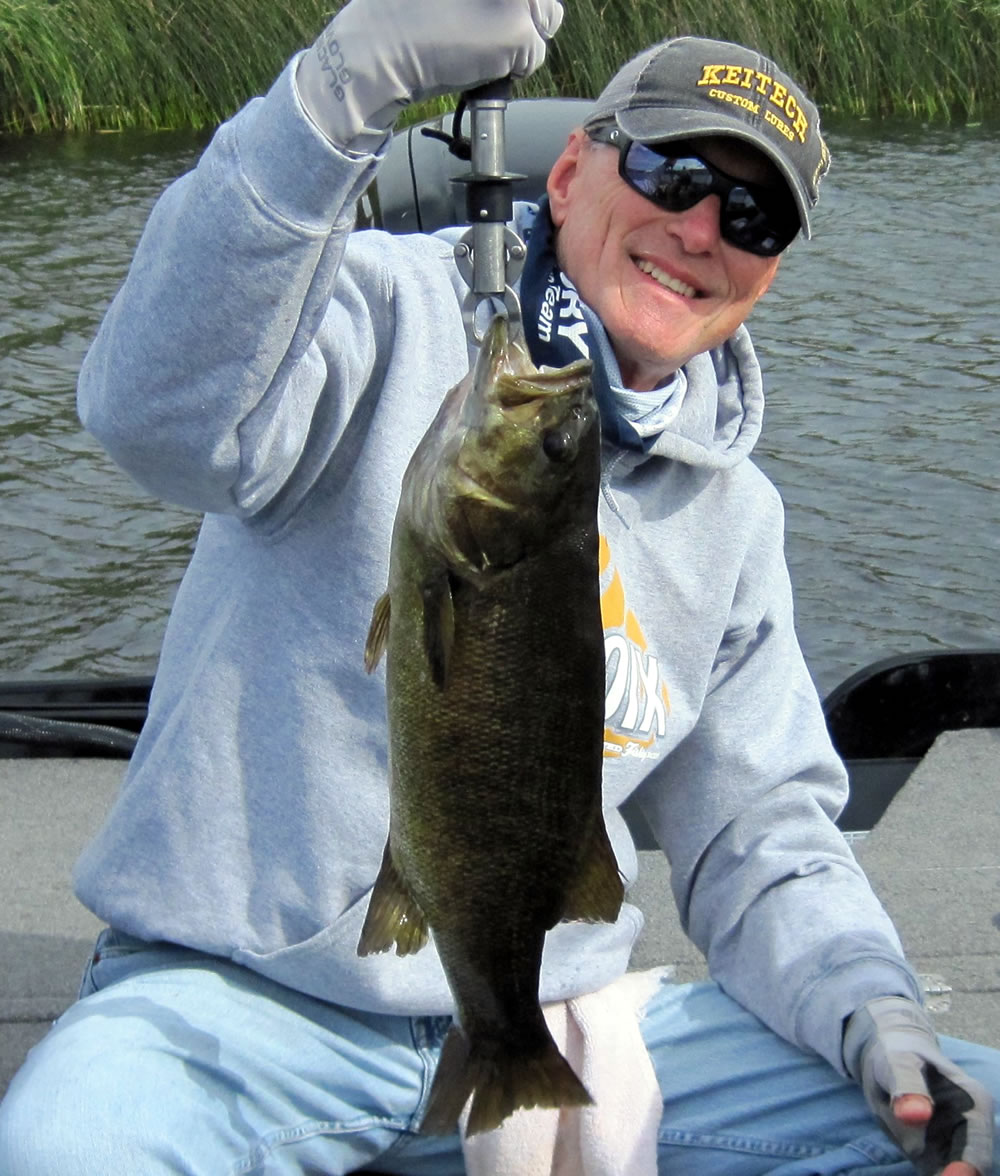 My first digital scales back in the 90's were designed with a hook to hold the fish while weighing them. Even back then the hook bothered me. I certainly wasn't going to puncture the lower lip to weigh a smallie and using that hook around the gill plate was a recipe for disaster if the fish made sudden movements, which they often do. A torn gill means a dead smallie, which is something that isn't acceptable for me. To protect the fish, I would put my hand close to their mouth and any movement at all would bring my hand down over the fish to keep from injuring it.

One well-known fishing product company marketed a gripper style digital scale about 20 years ago provided me one for a product review article. I always check the accuracy of all my scales using items of various confirmed weights (example: a 5-pound bag of flour, or a five pound dumbell). This scale weighed fish heavy by about ten percent, something that was important for a proud angler to know. I suggest you check your scale for accuracy as well.

I first learned of the BogaGrip about 20 years, but I didn't get to start weighing fish with my first Model 315 until about 12 years ago and haven't looked back. BogaGrip scales have weighed over 3,500 International Game and Fish Association (IGFA) world record fish and the IGFA has named it the #1 scale every year since 2004 when the award was established. The accuracy, stainless steel construction, small profile and light nine-ounce weight, make it a must have item for me in my YarCraft, Jackson Kayak or wading in my Frogg Toggs waders!

The BogaGrip scale
For those who would like a high-end very accurate digital scale, I've had a chance to use the Brecknell Major League Fishing (MLF) model and I like it. This is the scale used by Major League Fishing in their immediate release tournaments that are increasingly popular and, more importantly, are much better for the health of the bass. Like EastabogaTackle, the company that makes the BogaGrip, making high-end scales for a variety of industries is all Brecknell does. Almost all other companies selling scales have a third-party supplier. 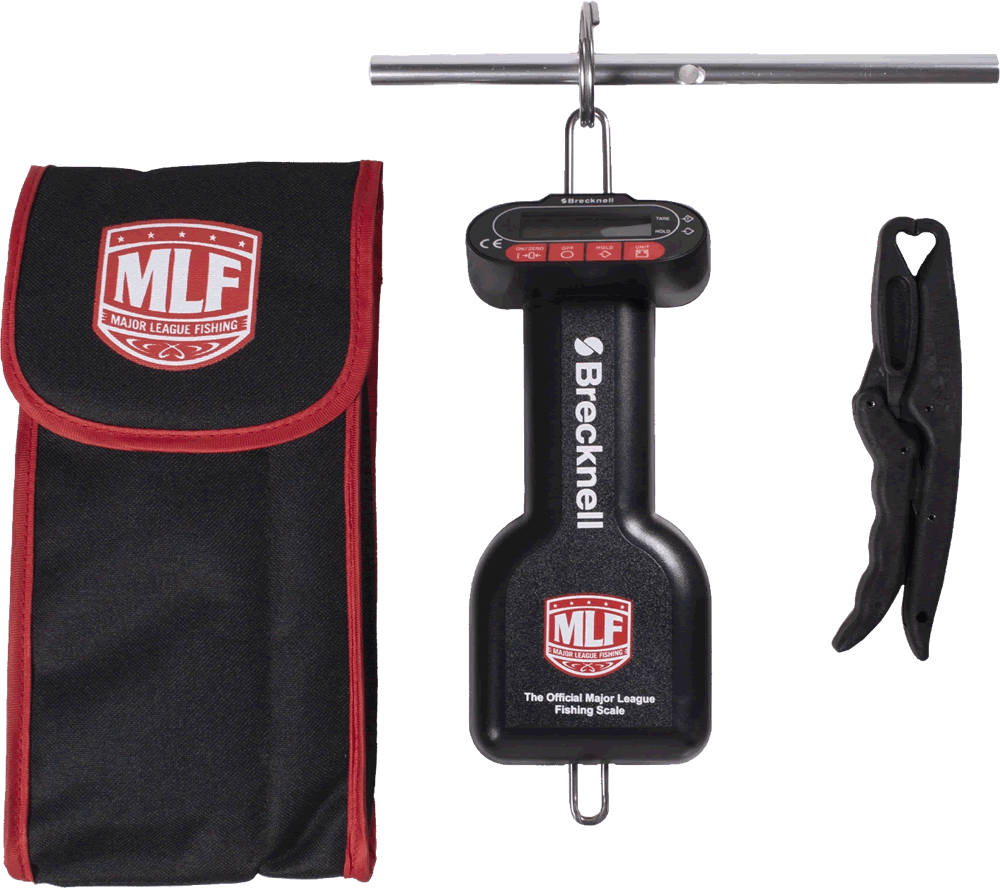 The Brecknell MLF scale
The BogaGrip retails for $139.99 and the Brecknell MLF scale for $89.99, so you don't want to drop them overboard. I suggest buying a simple float that can be attached to the scale just in case it ends up in the water. I know because I unfortunately dropped a BogaGrip in a Southeast Wisconsin lake from a kayak. In the kayak I tie my BogaGrip to the seat or handle with a nylon rope. Like the BogaGrip, the MLF scale is very easy on the fish and uses the Fish Grip Jr. for safely gripping the fish. For those of you with the old, hook-style scale, attaching the Fish Grip Jr. or Fish Grip Mini is a simple and great way to make your scale much more fish friendly.

The welfare and survival of the smallmouth bass is a priority for me, so I always have my BogaGrip handy in the boat, kayak, or fishing vest when wading. I get them in fast and release them very quickly. For a picture of those bigger smallies I have my camera mounted to the windshield of my boat with the RAM Mounts Twist-Lock Suction Cup Mount and in one of my Jackson kayaks with the RAM Track Ball Mount. Personally, I prefer to not put fish in my livewell, but if you don't have your scale and camera ready that's an option. Putting that smallie in the livewell for a minute or two to get yourself ready to weigh it and take a picture will protect the fish rather than trying to hold a big fish out of the water unnecessarily while checking for your equipment. This is especially important during the summer when water temperatures are getting into in the 70's and even low 80's in some lakes and rivers. When kayak fishing, I use the original Fish Grip, which is the larger version of this great product made of a lightweight composite that allows it to float. I tie it to the kayak with a nylon cord and the smallie can safely swim next to the kayak until I'm ready to weigh it and take a picture.

If you're on a lake or river that you're catching and releasing more than a few smallies, I strongly suggest you only weigh the bigger ones. On a body of water like Sturgeon Bay, for me a smallie must be approaching four pounds to weigh it and on the small rivers I fish, maybe two pounds and up, which is big for those rivers. Is there a reason to take the time to weigh and even take a picture of smaller fish? I don't think so and this will let you get that fish back in the water safely and faster. Weighing those big smallies is something many of us do. Our top priority must be the welfare of these beautiful smallmouth bass. So, try to follow the suggestions I've made. Only weigh bigger fish, do it quickly with a gripper-style scale and get the smallie back in the water as fast as possible!

Bill Schultz
Bill Schultz lives in New Berlin and Sturgeon Bay, WI, and is a contributing writer for several magazines and web sites. Since catching his first smallmouth bass in 1994, he has caught and released over 26,700. His focus has been on the big waters of Green Bay in and around Sturgeon Bay, along with rivers and streams throughout Wisconsin. Catching and releasing smallies and sharing his recipe for success has become a passion for him. Bill is on the Pro Staffs for St. Croix Rods, Mercury Marine, Yar-Craft Boats, Jackson Kayaks, Bending Branches/Aqua-Bound Paddles, Kalin's, Keitech USA, RAM Mounts, Cedar Lake Sales and Malone Auto Racks/Trailers.
TRENDING DISCUSSIONS
Advertise here