By Jason Mitchell - December 7, 2021
Shallow is relative. Ten feet might be shallow on some bodies of water where there are other fisheries where the basin or deepest water available might only be ten feet of water. We often catch walleye at early ice in shallow water but how shallow? A mistake I have made over and over in my own life is sometimes not fishing shallow enough.

Can't tell you how many times in my life where I tried to drill holes in say ten to six feet of water but a few holes were drilled even shallower by accident… a mistake. Can't tell you how many times when we caught fish out of these shallowest of holes, sometimes in two or three feet of water. The fish felt like an accident. Sometimes we make up our minds as anglers where fish are supposed to be and we get lucky enough to stumble onto fish what feels like accident. Over time, we realize these shallow fish are not accident and there are situations where we better look for fish in less than five feet of water. 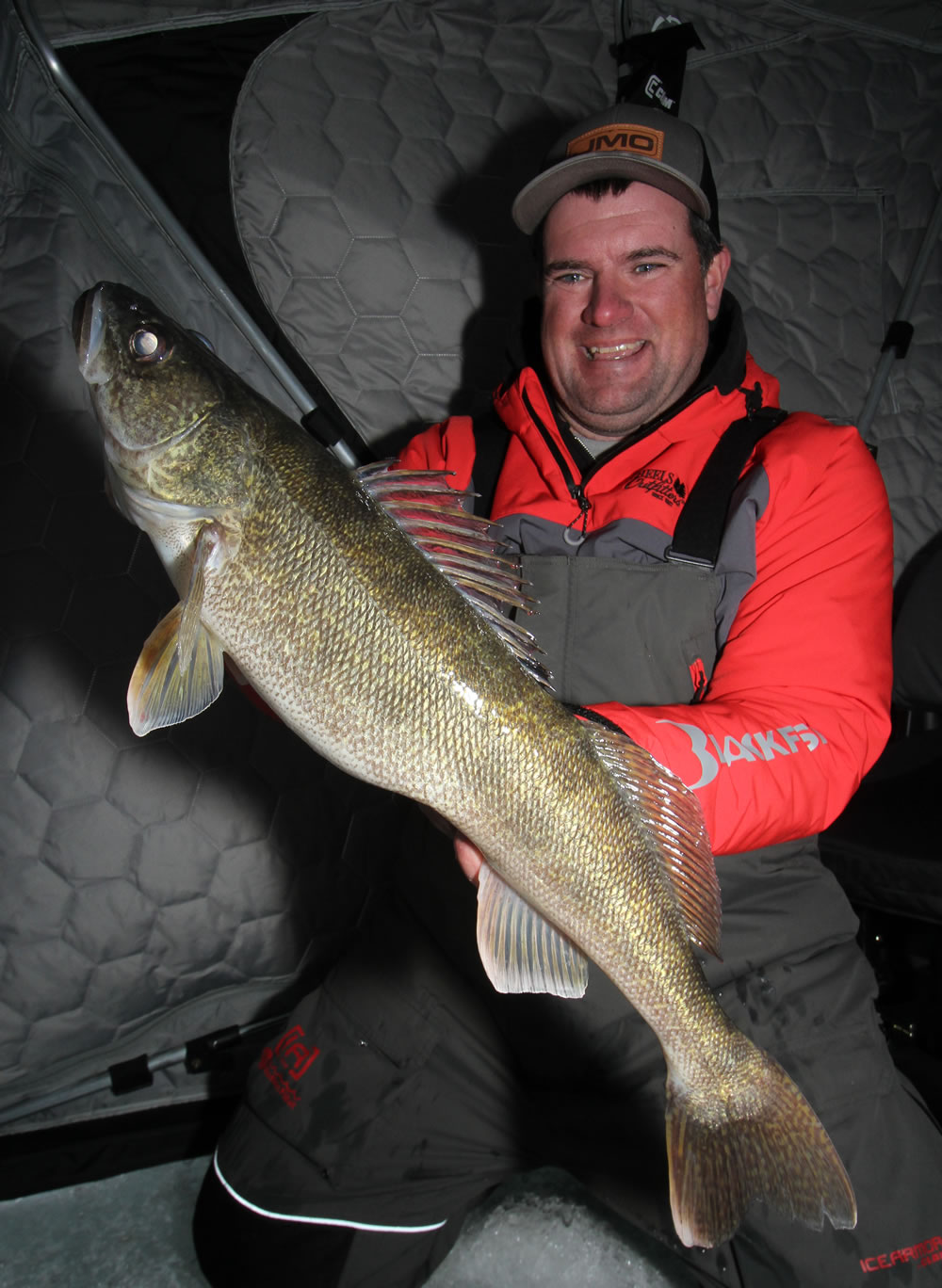 Jason Mitchell poses with a big walleye that came out of four feet of water. Some of the very best walleye patterns on many different systems across the Midwest, particularly at early ice are happening in less than six feet of water.
In both North and South Dakota, we have many shallow natural lakes with big walleye populations. These slough fish are notorious for running shallow, less than five feet of water. What we also see happen is skinny water patterns develop through the winter where we might be in six or seven feet of water but since we have four feet of ice, the amount of water below the ice might only be two or three feet. Have also seen walleye in less than five feet of water on many natural lakes in Minnesota. Leech Lake immediately comes to mind where we often find walleye roaming shallow sand flats. Flowages and river systems can also produce shallow walleye patterns.

As a rule of thumb, every ecosystem is going to have different forage, different personalities. Each system will fish slightly different but if you see extremely shallow patterns unfold on a fishery during the open water period, you better anticipate some of the same skinny water patterns under the ice. 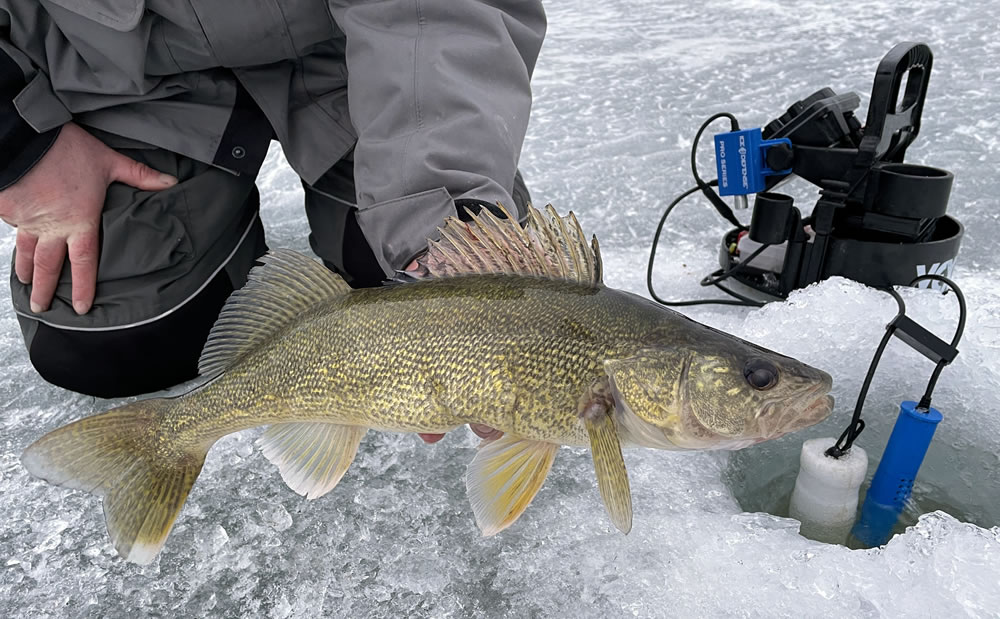 Shallow walleye are often aggressive but marking fish in such shallow water can sometimes be difficult. Keep your transducer as high as possible and learn to look for water displacement when fish turn on the lure.
The toughest conditions seem to line up with a little bit of clear ice in clear water. These fish seem to be the most sensitive. Catching fish in shallow water during these conditions is often a low light affair and you must make a conscience effort to be quiet. Drill your holes ahead of time and keep your lights limited to head lamps that you can turn on and off. Take your ice cleats off and try not to make a lot of noise, settle down into an area and let the fish come to you. Tip ups and extra lines set remotely can be important. The bite will often occur in the dark.

Stained water, cloudy ice and simply more ice however can make these fish much more tolerant of noise and what you can get away with. Not all shallow walleye patterns require stealth mode but universally, a lot of big vehicle traffic seems to shut down every shallow walleye bite we have ever seen. Therefore it is so important to be the angler that finds the fish first. With shallow walleye, you won't get their in time if you are waiting for reports.

Besides being productive, what makes these skinny water patterns so fun is that these fish are often simply aggressive. You are not working with much water so when these fish come in and punch a spoon or glide bait three feet from the end of your rod, the hits feel electric. The fish fight hard and are still full of energy when you bring them topside.

A challenge when fishing for walleye in such shallow water is simply dumping fish at the bottom of the hole when they hit the ice. Can also be a challenge navigating big fish up a hole when dealing with less than six inches of ice. These fish can back up and leverage their tails against the bottom of the ice. Almost must just plan to get your hands wet for big fish where you reach down below the ice and simply pin them to the side of the hole or get ahold of the gill plate.

Across the board, when fishing in really shallow water… upsize those treble hooks on your lures. Take about any spoon or glide bait and double the treble hook size. Seems like overkill but that larger hook and wider gap will keep fish pinned up much better when they hit the bottom of the ice. When dealing with a few feet of water, these fish will often hit the bottom of the ice basically when you set the hook. This isn't a situation necessarily for finesse unless you are using live minnows below tip ups and are simply letting the fish swallow the minnow.

Because these fish are often so aggressive, match your presentation and cadence to the attitude of the fish. Ring the dinner bell. Pound the lure with hard cadences. These fish are looking for a meal, they are looking for you so make sure fish can find you. My favorite shallow water walleye lures include flutter spoons like the larger Clam Pro Tackle Leech Flutter Spoons, the Super Leech Flutter Spoons and glide baits like the Tikka Minos. Use a rod with plenty of backbone just you can get the right pound on the lure and drive the bigger hooks into fish. In such skinny water, my best cadence is often just a hard six-inch knock where the lure bounces hard in a tight area. 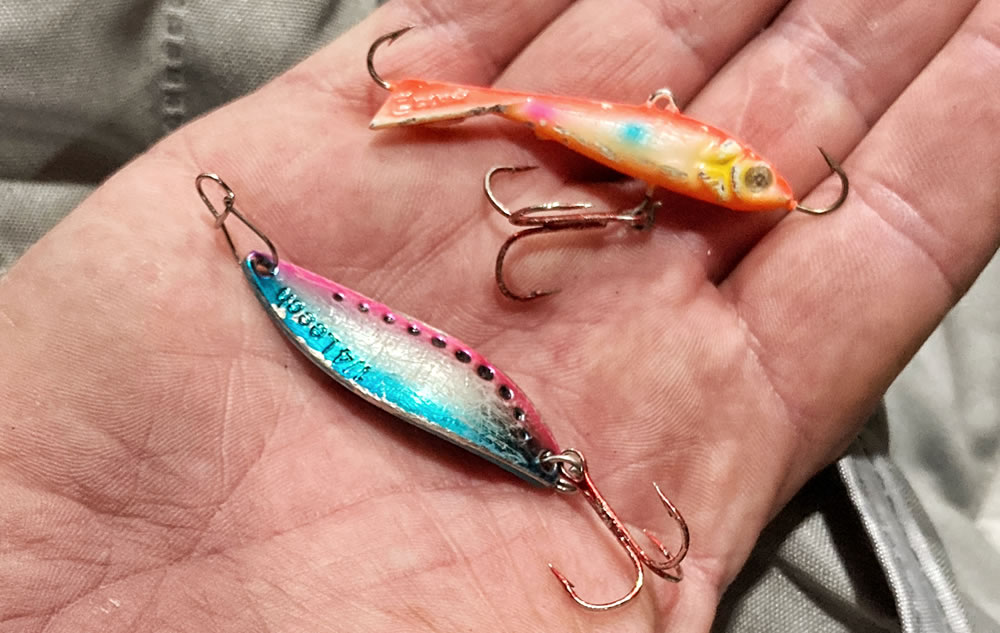 Top walleye lures for less than six feet of water include the Clam Leech Flutter Spoon and the Tikka Mino. Upsize the hooks when fishing skinny water.
Marking shallow fish with electronics can be tricky and some of these fish will just blow you up and surprise you where you don't see them until they hit. Get your transducer as high as possible and learn to look for water displacement. Sometimes (especially with bigger fish) fish will dart in and out and as they move water and stir up sediment on the bottom, that commotion can show up on your Vexilar as thin, choppy lines. Get ready. Even in three feet of water however, you are still going to have about a foot of cone angle so get your transducer high, use the lowest power setting and you will be able to mark many of the fish.

A cool sidebar we have noticed at times with shallow water walleye, especially in stained water… is how much fish can be attracted to the auger. Not sure if the current from drilling a hole moves water around and creates a commotion that attracts fish or stains the water that the fish like. Might even be some flash and reflection from the blades turning but we have seen situations where the auger seemed like a fish magnet. Something else we notice a lot is that if the fishing does slow down, simply drilling a bunch of holes seems to stir things up and moves fish around where they become active again. So there are times when you have to be in complete stealth mode and drill your holes ahead of time but there are other situations in stained water where drilling holes seems to attract fish or turn them on.

At early ice, we are often targeting shallow fish along shoreline structure. Sand with some type of rock, gravel or wood is often a magnet, especially if you have quick access to deeper water. If there is a mistake, I have made many times myself or a simple lesson I must relearn from time to time, that mistake would be simply not getting shallow enough at early ice. Some of the most fun, most aggressive bites that happen each winter for walleye often occur in less than five feet of water on less than six inches of ice.