Gearing Up for First Ice 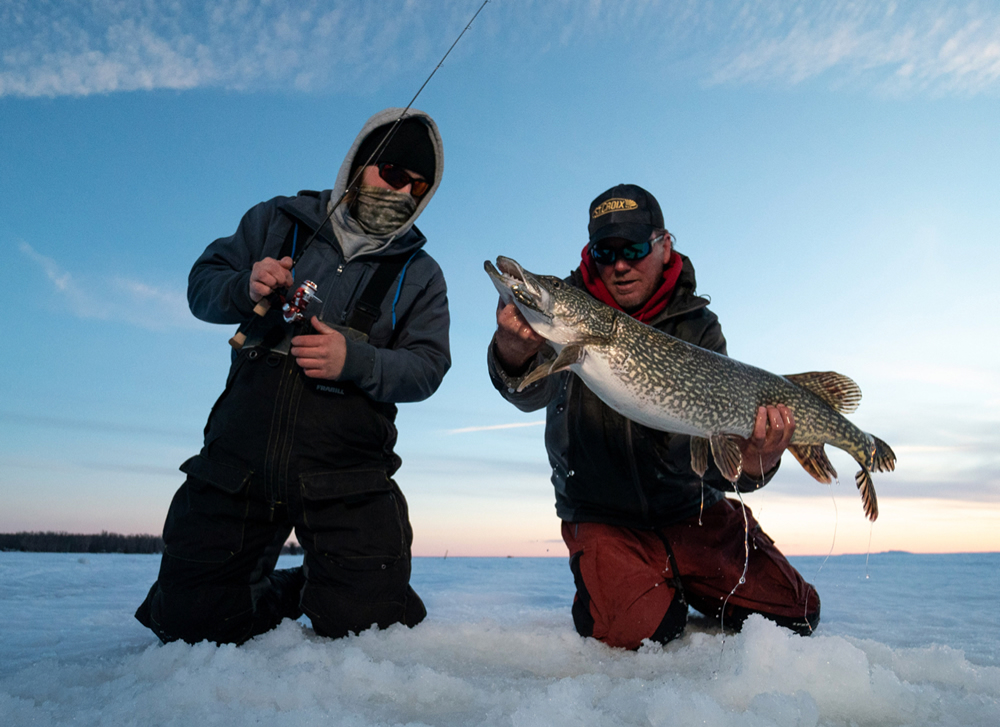 In northern climates, long rods and long casts will soon give way to hardened surfaces and vertical presentations with short sticks as impassioned anglers try to pull a host of fish species through holes in the ice. But simple sticks they're not. Growing numbers of ice anglers expect to take full advantage of new materials, improved ergonomics, advanced construction methods, and ice-specific componentry to give them the upper hand in their personal hardwater pursuits. More than ever, fishing tools that deliver more success and more enjoyable on-ice experiences are in demand.

Technique-specific custom ice rods like St. Croix's hyper-performance Croix Custom Ice (CCI) Series have increased the ice-IQ of anglers across the Ice Belt, offering presentation- and species-driven lengths, powers, and actions that simply make better tools for any given task. But even as high-tech options far surpassing the overly whippy, rug-beater ice rods of old abound, anglers demand some middle ground, too. This is where St. Croix Rod - the family-owned, American company that's been handcrafting the Best Rods on Earth® for nearly 75 years - upholds its promise to anglers, offering no less than 49 distinct ice rod models across five different series to meet the specific performance goals and budgets of anyone who wants to experience more success or have more fun while ice fishing. 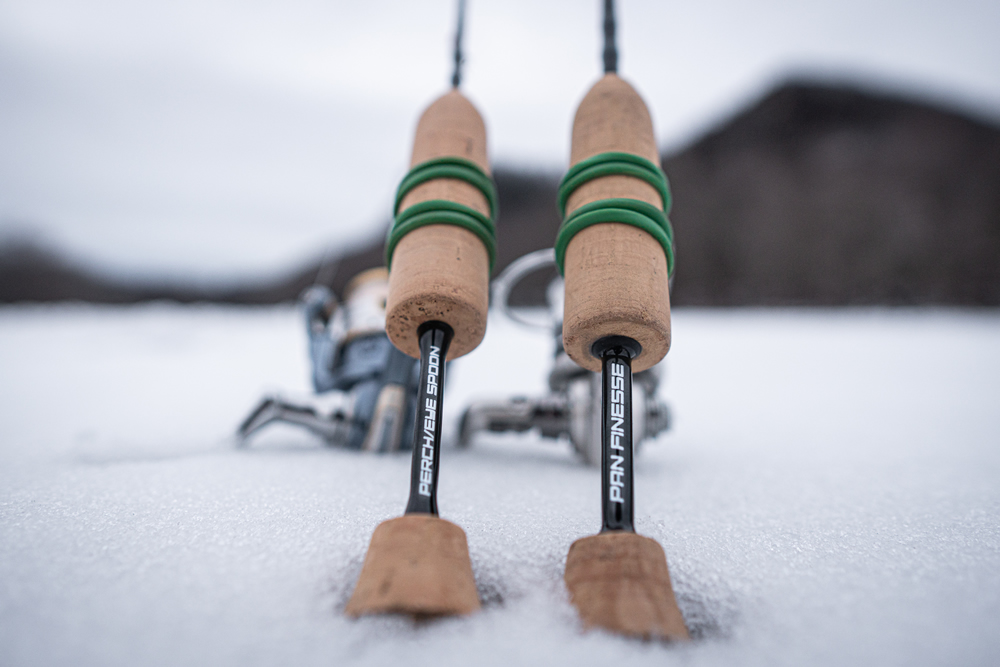 No doubt, that's a lot of options, but first ice is often all about having such options. Enter legendary fishing guide, Rob Manthei of St. Germain, Wisconsin. Manthei needs little introduction to those in musky circles; he is widely regarded to be among the best musky anglers, not just in a specific geographic area or time period, but one of the best ever. What many don't know, however, is that Rob also has a deep-rooted passion for ice fishing for walleyes and panfish.

Early in the season, Manthei primarily fishes first-break weed lines to target aggressively feeding walleyes. "We can fish multiple lines here, so it's nice to set up a tip-up or two to monitor an area, but we catch most of our early fish by actively jigging," he says. "The fishing can get tougher as the season drags on, so I really focus on that first streak of good ice." Simple 1/16-to-1/8-ounce spoons tipped with either a minnow head or complete minnow fit the shallower depth range and size profile that hungry walleyes are looking for this time of year. "Good green weeds are definitely one of the keys here," adds Manthei, who takes note of the best weed beds during the late stages of his open-water fishing and returns to them at first ice. 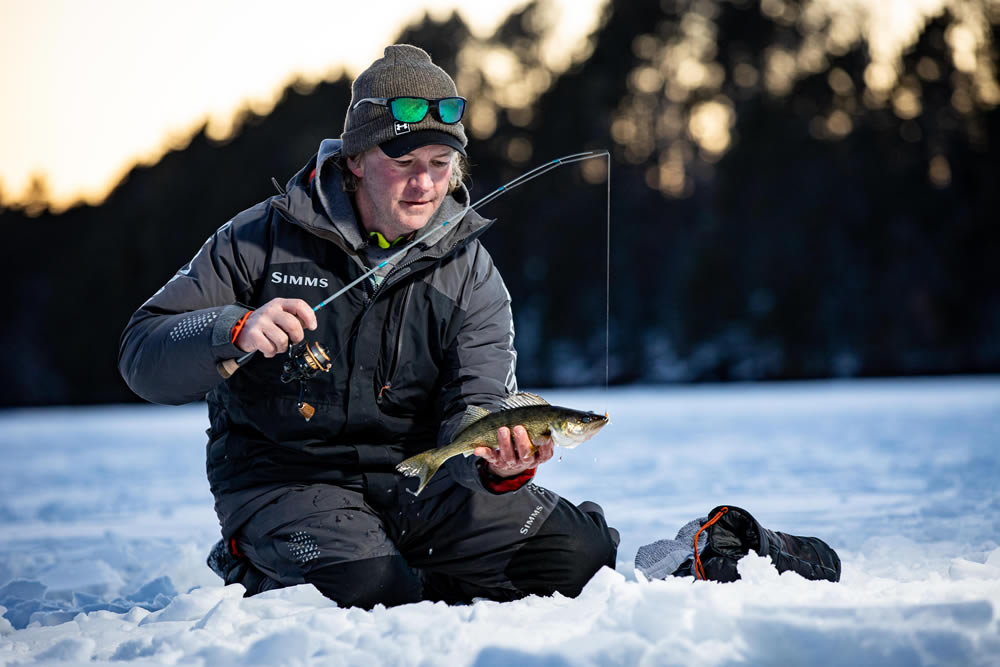 Another great first-ice option on some of Manthei's waters are deeper grass flats where fish can settle out into larger areas. "Especially on many of the basin lakes I fish, we'll find first-ice walleyes slid out a little deeper than many people might think," he says. "You'll have to up your spoon size a bit to get down to these fish, but the strategy is much the same." Again, Manthei employs a set-line approach with several tip-ups as an efficient way to monitor high-percentage spots, while he and his pals press the edges with aggressive jigging presentations. "We're looking for roving packs of hunting walleyes near changes in bottom content or other deeper structure. What we find while jigging regularly changes up the game plan," adds Manthei, noting that it's often an evolving bite. "Walleyes can start deeper and then just move their way up to a break, so you either have to anticipate that move, or move with them. Be prepared to drill a lot of holes and move your tip-ups a lot."

"I've always been a fan of the classic feel of a full-cork handle but have friends that definitely prefer split grip or full reel-seat options. This new semi-custom Tundra Series is going to serve the specific needs of whole lot of anglers." With a REC recoil stripper guide and SeaGuide light-wire single loop guides spaced along the rest of the rod, the overall low surface area reduces ice-ups too, which is crucial when Manthei hole-hops for walleyes at sundown when temps start to dip.

Manthei also enjoys chasing schooling crappies which congregate in basins come first ice and often remain there throughout much of the rest of the season. Schools of moving fish can require additional drilling and searching, making basin crappies a cat-and-mouse game until you settle over the group of fish, which may not last long. Once found, teasing fish into biting can be the most important part of the equation. Electronics are key, and so is being able to get down to marked fish before they disappear. "It's fun to settle in over the top of a big school of fish and figure out what trips their trigger," Manthei says. "So often for us, that's a 1/16-ounce spoon. It offers them some finesse and smaller profile, yet also provides flash and the ability to fish down to the crappies fast." 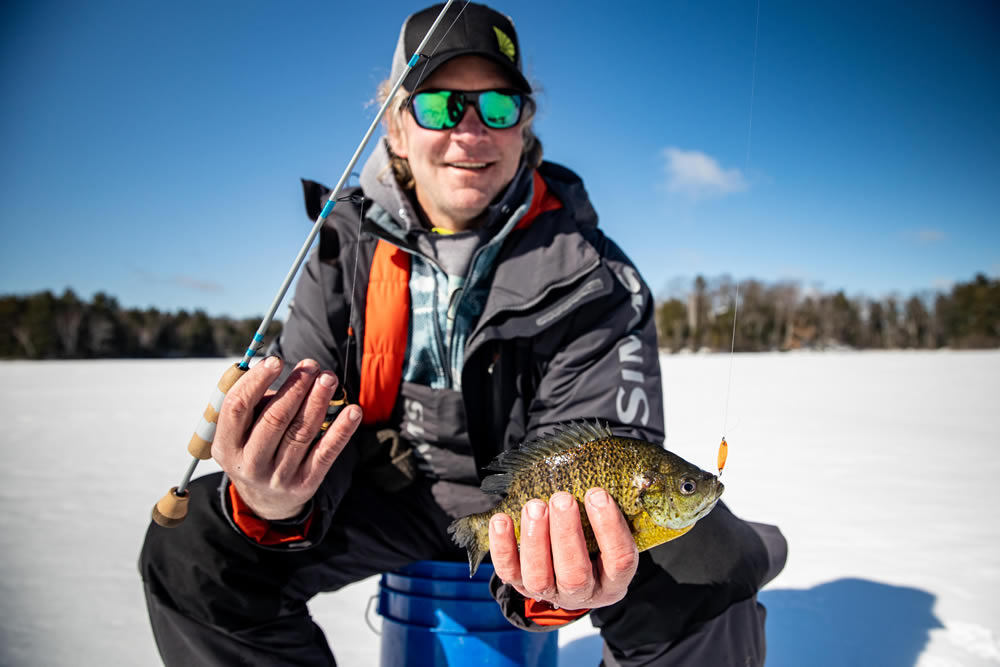 Hi-vis orange tips on select Tundra rods help anglers detect strikes from light-biting panfish like crappies, making the entire process of visual bite-detection that much easier. "I really like the models with a soft, extra fast tip. If they breathe on it, you'll see it; there's just no need for a spring bobber on these light power, extra-fast glass rods," says Manthei. "That's true when they just thump it and the rod tip drops, and also when they rise up and hit it, which often makes the rod tip lift in the process."

Long-time St. Croix Pro, Josh Peacock, hails from Kenora, Ontario, where first ice comes sooner, usually in November. As a former guide on Ontario's famed Lake of the Woods with a fisheries degree and work experience among different species, Peacock knows what it takes to put a variety of northern species topside. He's proud to mention that he's taken over 14 different species through the ice throughout the wilds of Canada, primarily with the use of his St. Croix Premier Ice rods. 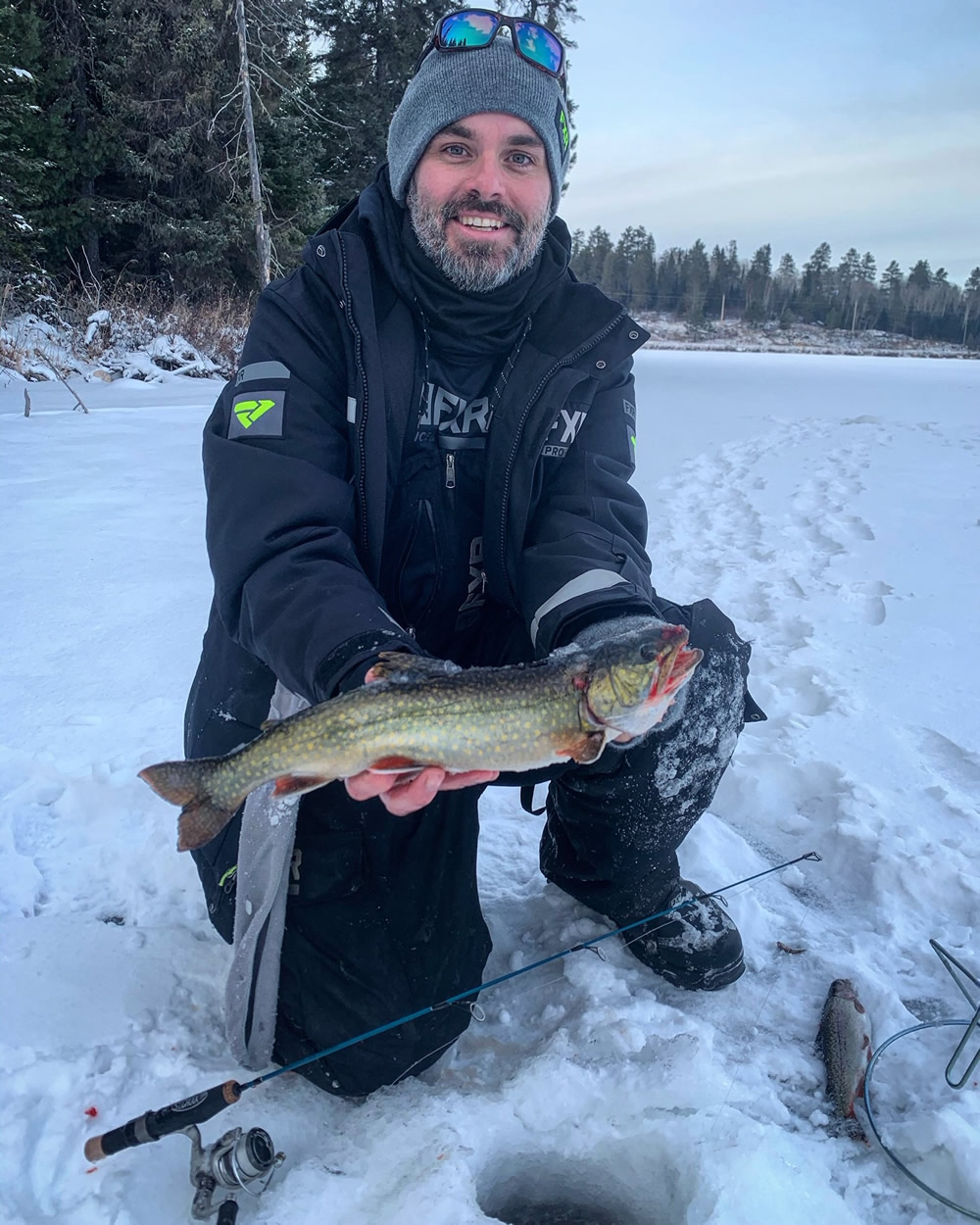 "I just can't get over how good they are for the money, especially these brand new Premier Series Ice Combos that come bundled with a super-smooth 100-size St. Croix spinning reel," says Peacock. "There's five models available with sensitive, solid carbon blanks, reliable NPS reel seats, and lightweight stainless steel guides to cover any kind of fishing, and you get everything for just $65-$75." Peacock notes that he has different generations of Premier Ice rods going back more than a decade. "I've never broken one and still use every one of them," he adds. Never having broken a Premier is saying something for an angler who admittedly takes his gear to places and spaces that aren't forgiving to most ice equipment. "I've fished with these rods in -40 degrees Celsius, taken them on long trips into the back-country, and even stuffed them into back-packs to do it."

Owning a rod series, and literally growing with them as an angler over time, is both a testament to the St. Croix name and a hallmark of the durability of Premier Series Ice Combos. "I ice fish with a bunch of big dudes with big beards that love the cold," Peacock says. "They're busy working all summer, and ice is when they do the majority of their fishing. There's a lot of ice-fishing folks like this, which is why the performance, durability, and price-point of Premier Series Ice Combos provide so much appeal to so many."

Aside from early-ice walleye bites, inland trout lakes get a great deal of focus from Peacock, who targets everything from trophy lakers, to a mix of rainbows, splake, and other trout species. Again, durability is a key component of any combo, not just over time, but for individual trips. "We usually snowmobile in, pulling a sleigh full of gear," Peacock says. "Most of the other stuff we haul in does not play nicely with fishing rods. Even when you protect them in a case, you still have extremely rough terrain jostling things around combined with bitter-cold temperatures. These rods always survive unscathed." 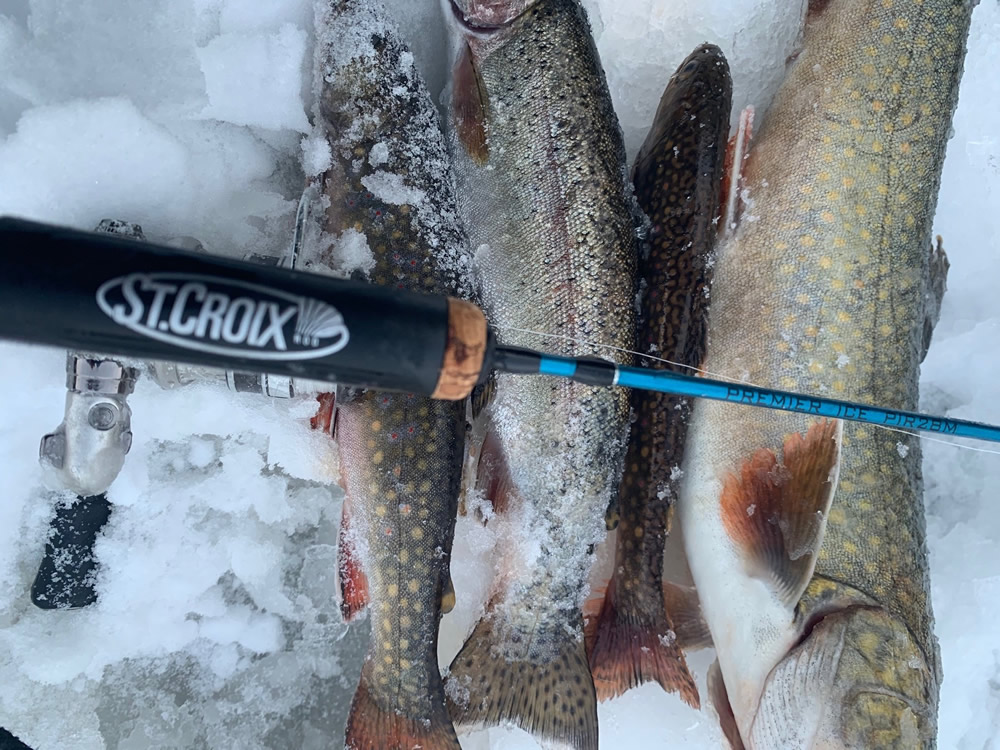 For most trout applications, as well as big pike or walleyes, Peacock loves that Premier Series Ice Combos are built with a reel seat. "It's easier to swap out ice reels back and forth from summer use, and the reel seat just gives more solid feel and reliable performance when battling those larger species," says Peacock, who adds that flexing butt sections under stress from heavy fish can cause reels on rods lacking a reel seat to move and feel unsecure. "In a market full of full-cork and split-grip options with fewer reel seats these days, it's nice to have choices that cater to anglers who really prefer that option," Peacock offers. 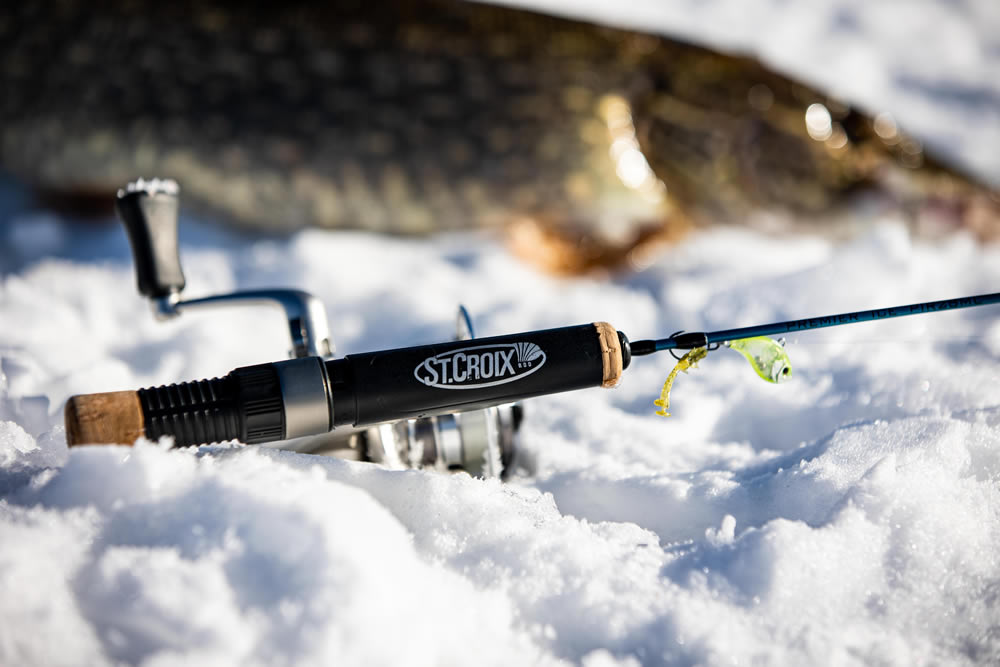 It's great to live in a world with options, especially in the case of today's ice-rod market. "Once you fish with one or more of St. Croix's pinnacle Croix Custom Ice (CCI) rods, I'll admit, it's hard to fish with anything else," Peacocks shares. "Especially for crappies and so many of the other bites where I rely on St. Croix's top technologies to deliver for me. But on so many other bites, a quality stick - one that's really durable and versatile - is even more important. I usually don't have the luxury of taking 12 combos into a remote inland trout lake, so the rods I'm able to pack need to do a lot of things really well. For me, the St. Croix Premier Series Ice Combos get the nod because they offer affordable versatility, reliability, and durability that has been proven over the past decade of harsh, Canadian winters."

For Manthei, it's all about St. Croix performance with all the options he favors. "Full cork in a variety of lengths is what I'm used to for walleyes, and I just fish better when I have what's comfortable," he says. "When it comes to those crappies, it's nice not to have to worry about a spring bobber either, as I don't want to use it if I don't have to. It's just built into the Tundra Series panfish options. While it's just one of St. Croix's five different ice series, the new Tundra Ice Series has so much for just about any ice angler, not the least of which is exceptional performance across every model. These new Tundra rods share some DNA and similarities with St. Croix's elite-level CCI rods, making them an affordable luxury for many anglers looking for elevated performance in any given technique." 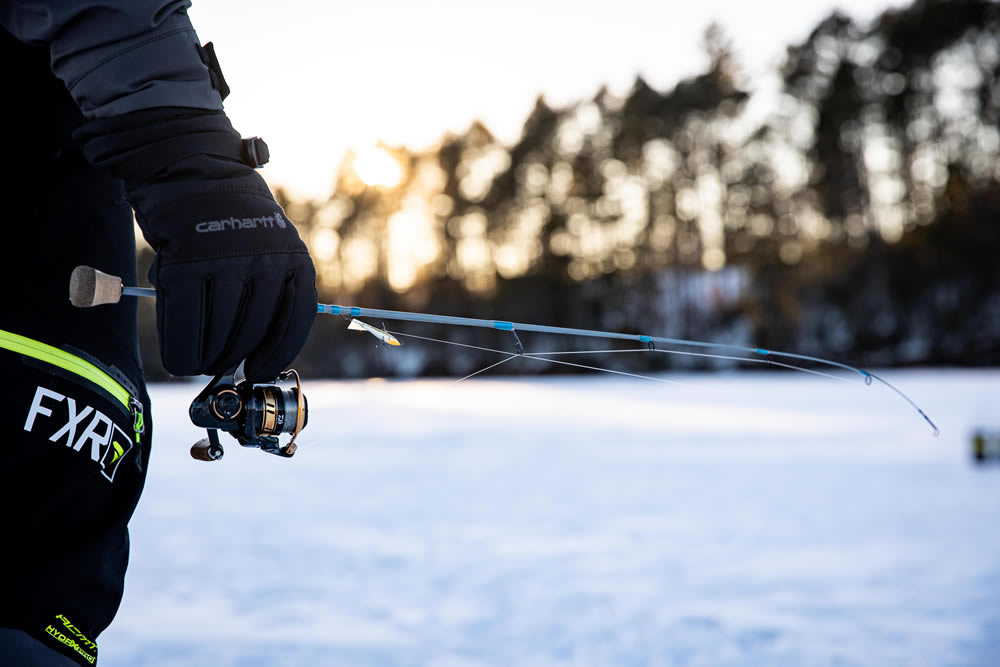 As first-ice bites unravel, be sure to stay safe and make a plan for getting on and off the ice sheet without breaking through. No fish is worth your life, but for those who step light and play smart, the first-ice period can provide some of the very best fishing winter has to offer. This season, consider your options when it comes to the complete range of ice offerings from St. Croix. That might mean upping your game with a high-performance model for a specific pattern or technique, or simply supplying yourself with a few new, affordable rod and reel combos that can ensure you're prepared for anything the ice season has to offer.
Josh Lantz
TRENDING DISCUSSIONS
Advertise here
Advertise here
Please take a moment to visit our sponsors. Without them we would not be here.