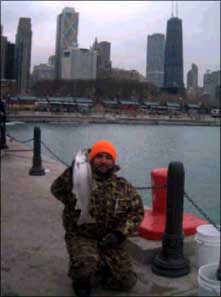 When I set out to write this article it became apparent that it would have to be published in two parts. There is just so much good fishing in the Chicago area that I could not cover it all in one article. If you are planning a trip to Chicago please E-Mail me and I would be happy to help you plan a day of fishing.

What do you think of when you think of Chicago? Do you think of Al Capone, tall buildings, the hustle and bustle of one of the biggest cities in the United States, or the best pizza in the world? I bet that almost no one thinks of Chicago as a fishing destination. There are many angling opportunities within the Chicago city limits and many more if you are willing to travel an hour or so away!

The first fishing spot I would like to share with you is right in the middle of downtown Chicago! The late Richard M. Daley, our long time mayor and father of our current mayor had a vision to clean up the Chicago river, this river runs right thru downtown and then forks to the north and south. I can remember about 25 years ago the mayor saying that he had a plan to clean up the river so that people who work downtown could go down to the river on their lunch hour and catch a fish. "There is nothing as wholesome as a fish," he said at a news conference as a group of reporters laughed in the background.

I just wish that Richard M. Daley were here today to enjoy what the Chicago River has become. There are now over 14 species of fish that call this river home; these include bluegill, crappie, yellow perch, catfish, largemouth and smallmouth bass and carp to just name a few. Most of these fishing spots are in the shadows of some of the tallest buildings in the world. There is several bank fishing tournaments held on this river every year. When the 2000 Bassmasters classic was held in Chicago there were many competitors working the river during the pre tournament practice and during the tournament.

The next spot I would like to tell you about is Navy Pier, this one time freight port sat dormant for almost two decades. It took almost 10 years of planning and building to make Navy pier the huge success it has become. There are many attractions on the pier including several theaters, many shops, a children's museum. and a giant Ferris wheel. But what I like the most are the yellow perch that call the pier home, these tasty fish love the tons of rock that was used to shore up the pier when it was built. Navy Pier opens at 5 am and there is a special parking rate for fishermen as long as they leave by 10 am and show their valid fishing license, this indoor parking is just a short walk from the north side of the pier where fishing is allowed, this makes it an excellent place for a handicapped angler since there are no stairs involved.

A two-hook crappie rig baited with fat head minnows are the ticket for the yellow perch here, there are also many brown trout and some Coho salmon caught from Navy pier, a Lake Michigan trout stamp is need to keep these fish, if the angler has not purchased this stamp these fish need to be released.

There are many harbors along the Lake Michigan shoreline and every one of these harbors offer Charter boats. These professional fishing vessels offer either a half-day or a full day of fishing for Coho and Chinook salmon, Steelhead, brown, and lake trout. The charter captain provides all of the equipment needed; all the angler needs to bring is sunglasses, warm clothing if needed, and the ability to listen carefully to what the captain has to say. The spring Coho run can provide a quick limit of these tasty little fighters, these fish range from 1 ½ to 5 pounds at this time of the year and are great to eat either baked or smoked. Later in the year during the fall run the huge Chinook or King salmon come close to the shoreline. These fish run up to 38 pounds, they can get larger but we rarely see them bigger in Chicago.

The Chicago park district has ponds and Lagoons in some of their many parks, these parks include Columbus park Lagoon, Douglas park Lagoon, Garfield park Lagoon, Humboldt park Lagoon, Lincoln Park Lagoon, Marquette park Lagoon and Washington park Lagoon. These lagoons are stocked every year with Largemouth bass and catfish and have many other naturally occurring species in them. These inter-city ponds offer angling to many children that don't have any other angling opportunities.

As we move North from the heart of Chicago there are many small lakes and ponds that offer fishing opportunities. One of the lakes that are very popular is the Skokie lagoons this chain of lagoons was formed when the Skokie River was dammed. There are 7 lagoons that are connected by long skinny channels. The Skokie lagoons have just been thru a clean up process in recent years that included dredging and restocking of many game fish, these include Northern pike, Walleye, Largemouth bass, Crappie, Bluegill and Catfish. There are many shore fishing sites and boat launching ramps along the shore. There are no gas motors allowed on the Skokie Lagoons! 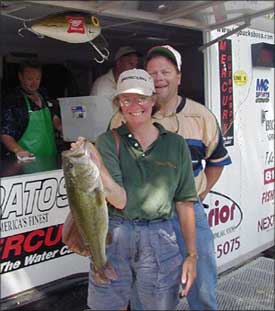 The Cook County Forest preserve have a stocking program at their many lakes witch include Axhead lake, Bellaue lake, these lakes are stocked twice a year with an average of 1500 pounds of rainbow trout, These trout average ½-3/4 of a pound and are eager to bite so it is a great place to take children fishing. Some of the other Cook county Forest preserve lakes include, Arrow Head Lake, Busse Lake, Beck Lake, these lakes are stocked with Northern pike, Largemouth Bass, Walleye, and catfish every year, many of these fish have survived for many years and now have grown to trophy size.

Travel an hour or so south of down town Chicago and you can experience some of the best fish that the Midwest has to offer. These lakes are cooling lakes for the area power company's generating plants. The launch ramps at these lakes are always free and there are concession stands that sell bait, lake maps and food. These lakes are open for fishing only so there are no jet skis or other boaters out there to ruin you day. There is also excellent shore fishing on these lakes.

Braidwood Lake, this 2640 acre lake is used by the power company to cool its coal fueled power generating plant, the constant warm water in this lake make the fish have a long growing season. This lake opens on March 1st every year and is open until two weeks before the Illinois waterfowl-hunting season, this lake is used as a sanctuary for the migratory game birds passing thru so there is no hunting allowed. Every year when this lake opens there are crowds waiting to get on, these fish have not seen baits for 5 months so they are easy to catch. Braidwood Lake has been stocked every year since 1985 with Walleye, Largemouth and Smallmouth bass, Striped bass, Tiger Musky, Flathead and Channel catfish and white and black Crappie.

Another of the power plant lakes is Heidecke Lake; This Lake is 1,955 acres and is also used to cool a coal-fueled power plant. This lake also has a long growing season due to the warm water. Heidecke opens for fishing only on the 1st of April thru the second Sunday in October. The primary fish species are Walleye, Channel catfish, Bluegill, Yellow and White bass. Secondary species are Tiger Musky, Smallmouth and Largemouth bass and Hybrid and Striped bass.

The last cooling lake I will write about is LaSalle Lake. LaSalle is a cooling lake for a Nuclear power plant; this 2,058-acre lake was built in 1977 and opened for fishing only in 1986. LaSalle had a reputation for years for giving up huge fish but a recent fish kill has impacted this fishery. Largemouth and Smallmouth Bass, Channel catfish, Walleye, Sauger, Crappie and Hybrid Striped bass have all been stocked aggressively since 1989.

Next month I will tell everyone about some of the natural lakes in the Chicago area. Remember if someone suggests a trip to Chicago it just might not be as bad as you might think! So bring along a rod and reel and enjoy some of the fishing Chicago has to offer!