By Shane Beilue - September 8, 2021
With the recent kickoff of football season, fall is unofficially here, regardless of how hot it feels outside right now. Even before those first crisp mornings of fall, there is a significant movement of baitfish toward the back ends of major creeks and tributaries, with schools of bass in tow.

Of course, not every bass in the lake follow the shad into the creeks; however, the ones that do seem to live for the moment, meaning they often live in groups chasing the shad wherever that may lead, as opposed to setting up on cover and waiting for the forage to come to them. This transient behavior of the bass lends itself well to an angler with freshly charged trolling batteries and crankbait rod in hand.

Rick Clunn, one of the all time greats in professional fishing, simplified this approach to fall fishing many years ago by noting his method of idling to the back of a major creek arm, positioning his boat in the creek channel, and firing casts across the channel lips as he worked his way toward the creek mouths with a crankbait. This approach is a "stick and move" method, requiring an abundance of casts until the bass are intercepted along the channel edges or upon nearby flats.

Crankbait depth is always key, as most strikes are triggered when the lure deflects off of the lake bottom; therefore, always pick a crankbait that runs at least 2-3' deeper than the flats and creek channel edges. This gets the lure on the bottom early in the cast and it stays on bottom, deflecting and stirring up sediment, all the way to the channel edge. For example, when fishing a 6-8' tapering flat that falls off into a 12' channel, make sure the crankbait runs at least 10' deep. You'll feel the bait digging along bottom until it suddenly clears the channel ledge and breaks into the channel, at which time, give the lure a pause to entice those bass positioned over the channel. 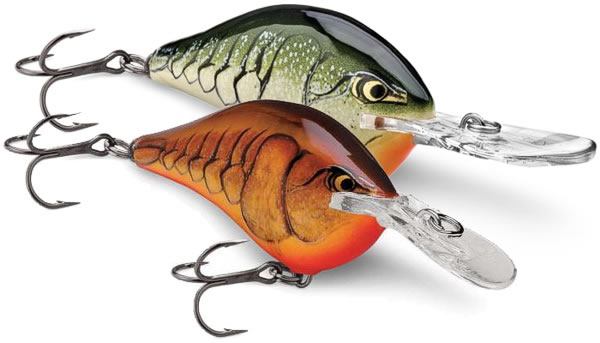 The Rapala DT (Dives-To) series of crankbaits, dive fast to a preset depth and stay in the 'strike zone' longer.
Key areas of focus are any tapering points that run from the shoreline toward the channel, as well as humps, high spots and any hard channel bends. If you don't get bites in an area, keep moving with the trolling motor.

Rod choice is also key for cranking and many anglers have gravitated to fiberglass rods in recent years, as that material has a slower response than graphite, which allows the bass to get the lure deeper in their mouths. The downside to the glass rods is they are heavier than graphite blanks and have a muted sense of feel. G Loomis has released a new cranking rod in the GCX series that meshes the deep flexing assets of glass with the improved feel and lighter weight of graphite. These graphite cranking sticks are 7' in length and provide added "pop" during the cast to send the crankbait a long way with just a flick of the wrist.

Fluorocarbon is the line of choice when cranking due to its low visibility and dense attributes that cut through the water column well. 12-15# test is ideal when cranking; however, heavy cover may require heavier line. Keep in mind that line diameter does impact lure depth, so heavier lines may require a deeper diving plug in order to consistently hit bottom with the lure.