By Jason Mitchell - July 26, 2021
Trolling can dominate many mid to late summer walleye fishing strategies and obviously trolling crankbaits enables anglers to cover water and fish fast. When fish are suspended, scattered across basins or flats or scattered along a deep contour, trolling enables anglers to fish through big locations to find fish. There is one particular pattern however that we are seeing emerge very prominently this summer and that is trolling cranks in what we call weed bowls.

Weeds will hold walleye through much of the summer but this summer is different. We have seen little precipitation across many regions where we have been fishing and high heat with little wind. These flat hot temps combined with low water seem to change many patterns. Not to say that we haven't been finding walleye on classic deep rock locations but when conditions get hot, weeds do offer good oxygen and shade that will hold fish even when the surface temps are cooking. 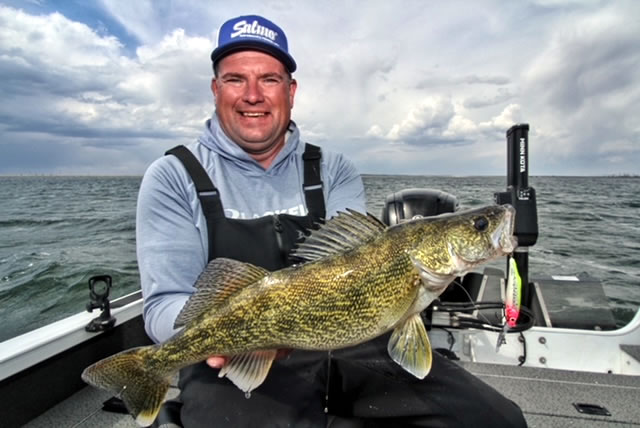 Trolling crankbaits inside basins or bowls surrounded by expansive weed flats is extremely productive for catching walleye during the dog days of summer.
This time of year, however, the weeds are often tall. In many locations where we have been fishing, the weeds are reaching the surface. On the dish bowl prairie lakes in the Dakotas like Devils Lake, the weed line is pretty distinct where the weeds reach the surface until about ten feet of water and then quit. We have also seen this pattern repeat on many natural lakes in Minnesota and beyond.

Many of these large weed flats have troughs or bowls in the flat that are slightly deeper. Could be a twelve- or fourteen-foot hole or bowl surrounded by weed choked water that is less than ten feet. If the spots are small, you can slip bobber or jig the locations but for the bigger spots, we find trolling crankbaits can be incredibly effective. Almost seems like these fish just get concentrated into these locations late in the summer.

The program can depend on the weed profile. On Devils Lake, the bowl might be three acres and only ten feet deep surrounded by an eight-foot contour that slopes up to less water and everything less than eight feet is weed choked. The program is often as simple as running cranks down to eight feet of water and tracing the inside perimeter of the bowl. On Leech Lake, the program might be similar but the weed edge might not be so defined in that cabbage might come up in eight or nine feet of water whereas there is a twelve-to-fourteen-foot trough where the weeds come up three feet in the deeper water and we might be running cranks five to six feet down so the lures run just over the tops of the deep weeds. 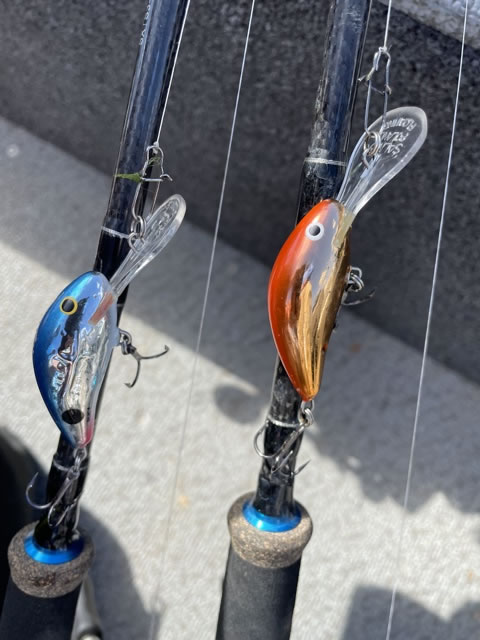 High action lures like the Salmo Hornet are deadly around weeds as the intense vibration shakes off weeds and pulls fish up out of the weeds.
On Saginaw Bay, the flats might be gigantic and the troughs or dips in the weed profile more subtle where you are looking for lanes or pockets where the weeds don't reach the height and the program is running cranks on a short leash behind a planer board.

When trolling around weeds, the advantage is generally the shortest amount of line possible to reach the trolling depth so you can clean weeds off faster but clear water might dictate getting the lure further away from the boat or using planer boards. The reality is that we seldom can catch fish close to the boat anymore on water with zebra mussels. 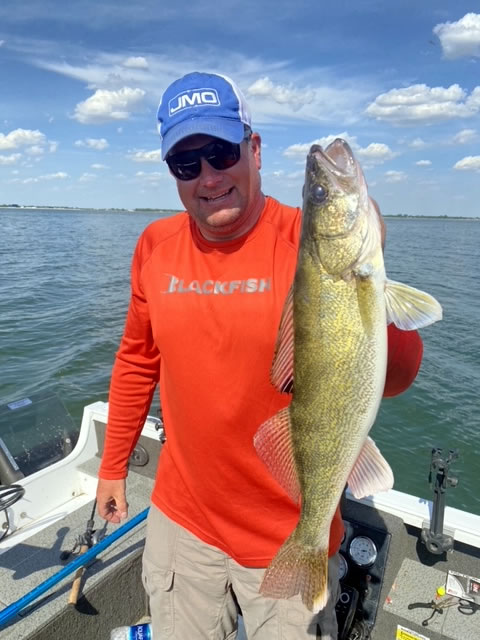 Excellent water visibility might demand running the cranks further behind the boat or with planer boards in less than fifteen feet of water. Abundant green weeds however will hold fish but as the weeds creep up out of the deeper water, prepare to run the lures higher as the summer progresses.
We like these locations because not only are they extremely productive but many anglers overlook these depressions or bowls. Many anglers tend to look for structure... something protruding or sticking up from the bottom and those locations attract a lot of attention right now. A long hole or bowl that is merely two to five feet deeper than the rest of the flat or bay is much more subtle and anglers often overlook these locations.

What we so often see happen right now is that all the walleyes that have been using these weed locations all summer long seem to concentrate and pile into these locations during the dog days of summer. With a good contour map and some recon work, these locations can often be surprisingly easy to fish. You will get weeded up at times as you learn the spot but as you fine tune the location, these locations just get easier to fish.

From week to week, you might have to adjust your cranks and amount of line to run the lures higher as the summer progresses if weeds are starting to creep up out of the deeper water but when in doubt as to where to run the baits, run them high and make the fish come up for the lures. When walleye fishing gets tough, these weed trolling patterns often save the day for us.