The other part about early summer muskie fishing that I really enjoy is that it's a casting game. Although there are times when trolling is the best approach, this isn't one of them. In fact I'm convinced that the reason so many anglers miss out on this early summer bonanza is because the fishing is just too easy, and they actually take themselves out of the game by overthinking it.

Indulge me, and I'll share all. Let's start with where to find fish. 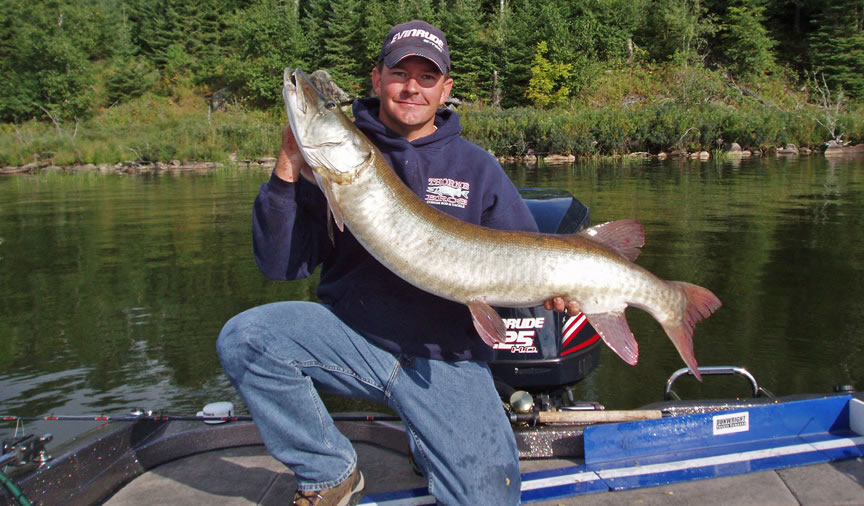 I should probably mention this up front - early summer muskie is more about having fun than trying to break a world record. The best fishing happens on smaller lakes and big rivers, where most fish tend to weigh somewhere from 10 to 25 pounds. While you can certainly catch bigger fish this way from time to time, most of the muskie you will catch are normal, happy, healthy adults of normal adult size. If you're gunning for the record books, this really isn't the best approach.

If you're just looking to catch some fish and have a bit of fun, however, it honestly can't be beat.

You'll find most early summer muskies in shallow water of 10 to 20 feet in depth, hanging out just offshore of large, emergent weedbeds that attract big numbers of post-spawn perch and walleye. There, with water temperatures still to their liking, they cruise back and forth and snack on any smaller fish that venture too far from the cover. I like to stick to fishing the open water on the main lake basin side of shallow weed flats, covering water while casting smaller lures along the weed edge and out into the more open water. In that sense, it's a lot more like bass fishing than muskie fishing, which explains why you will occasionally pick up the occasional bruiser smallmouth and lunker largemouth between muskies. 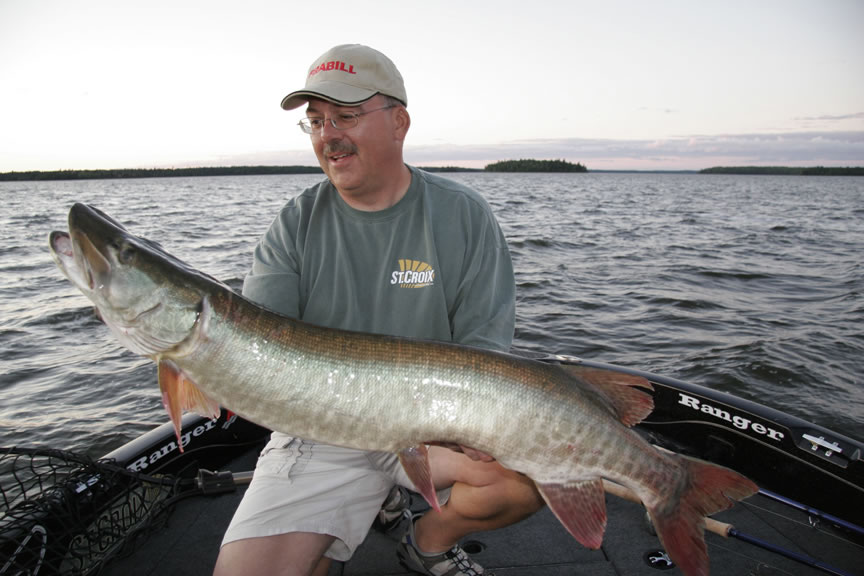 Steve Heiting has never met a muskie he didn't like, and that's especially true in early summer when he can reacquaint himself with nice fish like this.

The reason that the lighter approach works so well is because at this time of year, most of the forage is a lot smaller than it is in the fall. Early summer muskies are focused on eating smaller fish - perch in particular - since this is one time of year when their worlds collide in terms of water temperature and depth. Sure, you can catch fish on giant jerkbaits, but why wear yourself out when you don't have to, and when most of the fish are zoned in on smaller prey to begin with?

The lighter gear also makes it a whole lot easier to cover water, and that's another key factor in catching fish. The more water you cover, the more early summer muskie you'll see - and catch.

I chase early summer muskies with what most would consider heavy bass tackle, or perhaps "pike-weight" gear. Rods are generally 6-feet to 7-feet in length and rated in the 10- to 20-pound class, with moderately fast actions rated to throw lures in the 3/4-ounce to 1-1/2 ounce range.

Any big baitcasting reel with a high-speed retrieve and a reasonable capacity of appropriately-heavy line will work. I find 50-pound braid to be ideal, and it's fairly thin stuff. Heavy spinning gear will also work just fine if that's one's preference.

When it comes to baits, I stick to three. Again, this is about covering water so you want to use things you can retrieve quickly with horizontal presentations.

Probably half the time I'll throw big inline spinners -- usually Mepps Muskie Killers or Giant Killers. They're easy to cast, they're easy to fish, and hook-up percentage is virtually 100 percent. There's nothing to not like here.

I fish most of these as-is, straight out of the package. But I will adapt a handful of baits to run deeper for those times when the fish demand it. The easiest approach is to pull the rubber core out of a rubber-core sinker and just crimp it onto the shaft between the twin hooks, using lineman's pliers. The extra weight keeps the bait down and makes it easier to cast if the wind comes up. Go with whatever color blade and skirt you like, since it honestly doesn't seem to make much difference to the fish. 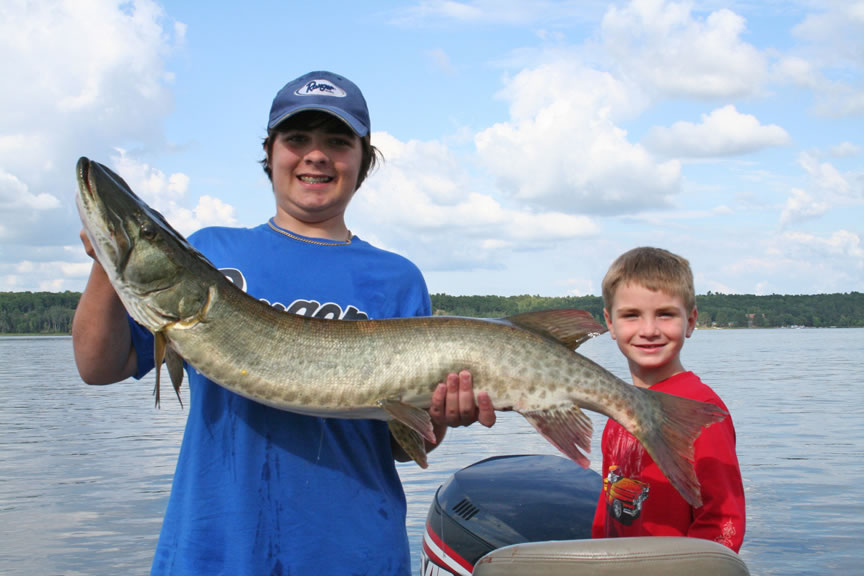 If there was ever a time of year when young anglers have a good shot at catching nice muskie, this is surely it.
I also carry some big buzzbaits on my early summer muskie jaunts. On those really hot, humid, sweaty mornings when the lake is glass-flat and you just know it's a matter of time till the thunderstorm arrives, buzzbaits can be positively deadly. Mornings like that are not the time to be delicate, so burn those baits back to the boat as fast as you can turn the reel. There are some mornings where you just can't retrieve it fast enough, and the hits are absolutely heart-stopping.

The third rod in my boat will be rigged with a crankbait, and it's something I turn to on hot, clear afternoons with no wind and when that scorching sun penetrates far into the water. In those conditions, muskie (and most other fish) will drop much closer to bottom and you'll have to go down there too to draw any interest. Rapala Super Shad Raps or Bucher Baby Depth Raiders in a perch finish are my go-to, but experiment with colors to see what the fish want.

Forget the big baits, forget the saltwater tackle, and forget the heavy offshore trolling routine. Casting for early summer muskies on smaller waters with heavy bass gear is a blast, and definitely some of the most productive fishing of the year. Give it a try - you'll be glad you did.