A Northern Recipe For Southern Smallies

"I've been waiting a long time to be able to do this in a tournament down here," was the phrase repeated many times by Shimano Pro Jeff "Gussy" Gustafson as he described a decidedly Canadian approach to chasing smallmouth bass. "This is something we do back home all the time, especially as smallies follow big schools of bait in deep water - I've probably caught thousands of bass doing this over the years." On the Tennessee River near Knoxville, Gussy leveraged his north-of-the-border smallmouth expertise to run away from the field, filling his livewell with feisty bronzebacks to earn his first win on the Bassmaster Elite Series. Gussy led the event wire-to-wire while expanding his lead every day of the event. By the time the dust settled, Gussy carried 63 pounds of Tennessee smallies across the stage and enjoyed a decisive victory.

Persistently cold water and inclement weather dealt Bassmaster Elite Series anglers a challenging hand during this late February event. Largemouth were scattered over flats and along ledges, with some fish transitioning into creek arms in search of bait and warm water. Gussy, however, had smallmouth in his sights. With main channel water temperatures hovering in the upper 40s, the Tennessee River's brown bass were still in full-time winter mode, bunched up in deep water and closely associated with isolated clusters of rock and rubble. Gussy knew just the right recipe when smallies are deep and the water is cold.

"A lot of guys might call this a Damiki Rig," noted Gustafson when referring to his Championship-winning presentation. "In reality, this is something that a lot of Canadian smallmouth anglers have been doing for well over 20 years. Back home, we call it moping. It's a finesse approach with a minnow-profile soft plastic rigged on a realistic jighead, tightlined right below the trolling motor so you can constantly monitor the lure and the fish around it. Boat and bait control, with the help of a lightweight and extremely sensitive G. Loomis rod and Shimano reel, are absolutely critical to keep the bait in the strike zone. For me, that was two to three feet off the bottom in 20 to 24 feet of current-swept water."

Gussy's deep-water smallies were collecting near large rocks and rubble, using the structure to deflect the cold current that became stronger as early spring rains soaked the region. While these fish were actively feeding - often coming to hand with tails sticking out of their throats or spitting out shad at boatside - Gussy's strikes were frequently subtle. "I relied heavily on the extreme sensitivity of my G. Loomis NRX rods to telegraph when a smallie had sucked in my bait." Gussy had a limited selection of G. Loomis spinning rods on the deck of his Lund all week, because his plan coming into the tournament was to power fish for largemouth in the creek arms and coves. A spotty practice period and a late discovery of his smallmouth honey hole caused a quick, decisive, and ultimately victorious pivot. Gussy's weapon of choice quickly became his G. Loomis NRX 872S JWR, a 7'3" rod with medium power and extra-fast action, specifically engineered for fishing jigs and soft plastics. "If someone was going to get only one spinning rod, the NRX 872S is the one to have. The rod is incredibly versatile, and is great for tubes, Ned rigs, wacky rigging, and of course moping with jigs and flukes."

Gustafson's G. Loomis rods were rigged with the newly redesigned Shimano Exsence. "I fished the 3000 series Exsence (EXSC3000MHG) all week, and I'm convinced that this is the best reel available for finesse fishing." The Shimano Exsence is a rugged yet smooth and light reel designed to take the punishment of saltwater fishing, but perfectly at home when battling freshwater giants. Engineered with Shimano's HAGANE Gear and MicroModule Gear II technology, Exsence delivers enhanced cranking power and silky-smooth operation with every turn of the handle. The reel's all-magnesium HAGANE Body makes Exsence lighter for reduced fatigue without sacrificing performance - and achieves extraordinary balance when paired with Gustafson's long, light, and extremely sensitive G. Loomis NRX 872S. "I use my reels really hard, fishing the Elite Series and of course back home on guide trips. I don't baby them one bit, and the durability and engineering of my Shimano reels help them last for years. They are pretty much bulletproof, and the best part: they help me catch more fish."

Gustafson spooled his Shimano Exsence reels with 10-pound-test PowerPro in Hi-Vis Yellow. PowerPro's sensitive, no-stretch characteristics were critically important for transmitting subtle strikes from the depths to the rod. The line's thin diameter and smooth finish cut the current as Gustafson hunted smallies in deep water, helping him to present the lure vertically and keep it within his sonar beam. Gussy used the Hi-Vis Yellow color to assist with bait control and visual bite detection. "Being able to see the line was a big help in staying perfectly vertical and seeing my lure on my electronics - especially with the overcast, rain and wind we had to deal with over the course of four days," noted Gustafson. "With super-thin 10-pound-test PowerPro, I could get my jig down to the fish fast and know exactly when it hit the bottom. I'm a big fan of Hi-Vis Yellow because I'm a full-time line watcher. If the line is tough to see, you get a headache trying to watch it. Tracking the bait and detecting bites by seeing the line is key: In a four-day tournament, an extra fish or two is a big deal. It's all I use, period." 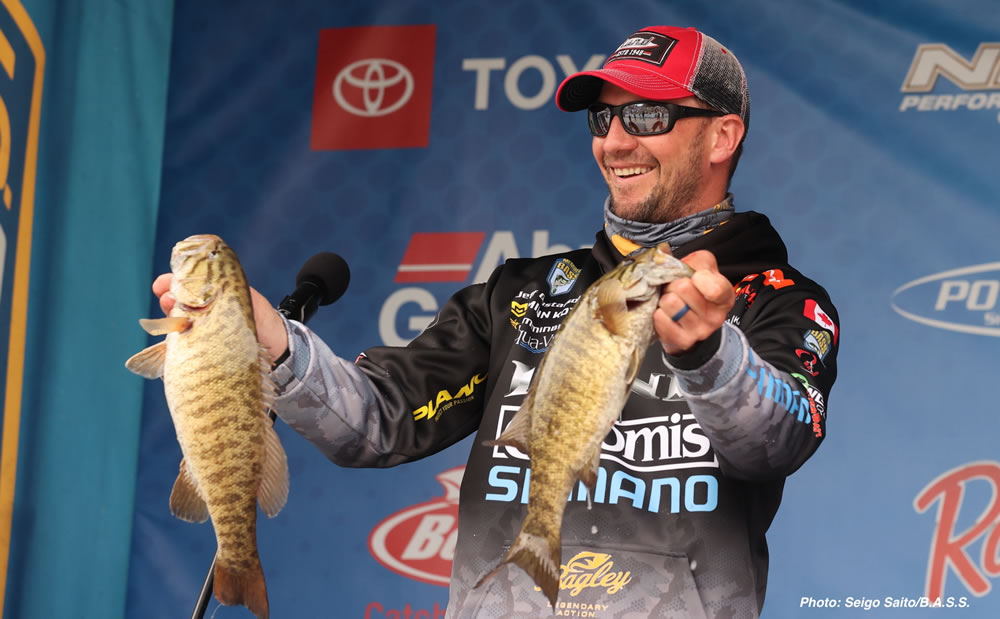 With an inspiring four-day performance on the Tennessee River, Jeff Gustafson outpaced the field and claimed his first Bassmaster Elite Series championship. Gussy leveraged a lifetime of smallmouth expertise, coupled with technological and engineering advances from Shimano, G. Loomis and PowerPro to add a coveted blue Elite Series trophy to his collection. "For the way that I like to fish - whether I'm guiding or in a tournament - I want to use the best tools available to put more fish in the boat. The whole system, from Shimano reels to G. Loomis rods and PowerPro line, connects me with success."

Just before pointing his truck north toward Ontario after nearly two months on the road, Gussy reflected that, "I live for competing in these tournaments. Winning my first Elite Series title is a big deal - a lifelong dream, and not just for me. It's a big deal for everyone that has helped me along the way, from my Grandpa, to Dad, to all of my family and friends. I hope I made everybody proud."