Getting The Jump On Early Spring Steelhead

By Craig Ritchie - March 11, 2021
No question about it - if you live in the Midwest then there's no better opportunity to catch steelhead than March and April, when the fish leave the safety of the Great Lakes and migrate en masse up tributary streams on their annual spawning run.

This is no secret - a fact borne out by the crowds that can sometimes develop along the banks of better-known steelhead streams. After a winter of sitting in ice shacks staring at a hole in the floor, it feels good to get out and stretch one's legs a bit, trying promising-looking spots in the spring sunshine. But in spite of the sometimes heavy competition from other anglers, early spring steelheading can still be surprisingly easy, and that's a big part of its appeal.

As always, success comes down to a combination of when, where and what. 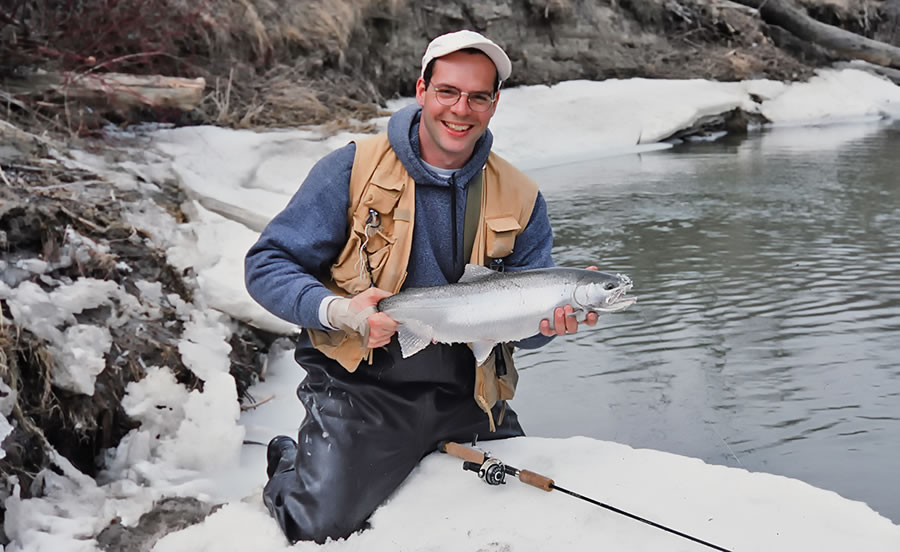 John Hagerman knows the allure of early season steelhead, and isn't afraid to wade through left-over snow in search of fish.

Steelhead are enticed upstream with the rising waters that come with snowmelt and the first warm rains of the season. Those conditions raise and color the water, making fishing difficult. Don't waste your time when the rivers run high and dirty, and instead try to be on the water as they drop and clear. Ideal conditions come when the water turns from a silty brown to a deep green color, which allows much greater light penetration and overall visibility.

Green water is when steelhead can see well enough to easily find your baits, yet still feel secure in their new environments. That's when you want to be out.

Most anglers put an emphasis on being on the water for daybreak, but that's not necessarily worthwhile when you're targeting early season steelhead. Many times, the afternoon bite will be better, as the fish grow more active following several hours of sun warming the water.

What's more, most of the early crowd goes home at lunch time, leaving streams that were crowded with anglers at 7:00 am nearly deserted at 3:00 in the afternoon - just when the fish become most active in that cold water. So enjoy the rare chance to sleep in and still be there in prime time to catch the best action of the day. 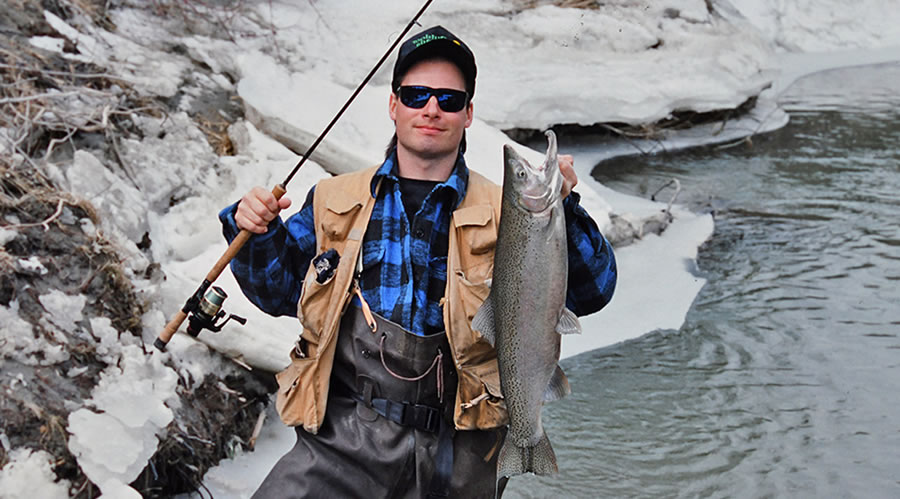 While egg sacks are generally dependable baits, there are times when other options like small worms can work better. Greg Elaschuk tricked this March fish with a worm.

Steelhead that are headed upstream to spawn will try to make progress and cover ground while the water is high, since deeper water means easy passage over logjams, shallow riffles and other obstacles. But as the water drops and clears to a point where fishing becomes attractive, they will begin to collect in deeper pools where they feel safer. Remember, these fish have lived most of their lives in the open waters of the Great Lakes - suddenly finding themselves in a shallow stream leaves them feeling terribly exposed.

In typical weather conditions through March and early April, nighttime water temperatures are still extremely cold, hovering barely above freezing - especially when most of the runoff comes from snowmelt rather than rain. As cold-blooded animals, steelhead will seek out areas where they can escape the main force of the current, and that's why they tend to concentrate in deep pools.

The most active fish in any river will be found at the heads of the pools, where the faster-moving water provides a greater level of oxygen content. These steelhead are the fish equivalent of someone milling about the kitchen pouring that first cup of coffee in the morning - they're not super active, but certainly more likely to consider having a snack than the fish located near bottom in the deeper water, which have effectively hit the snooze button and gone back to sleep.

In cold water, you'll catch more fish if you focus your energy on appealing to the ones in the faster water at the heads of the pools. Save the fish in the slowest, deepest water for later in the day, once the sun warms things up a bit. 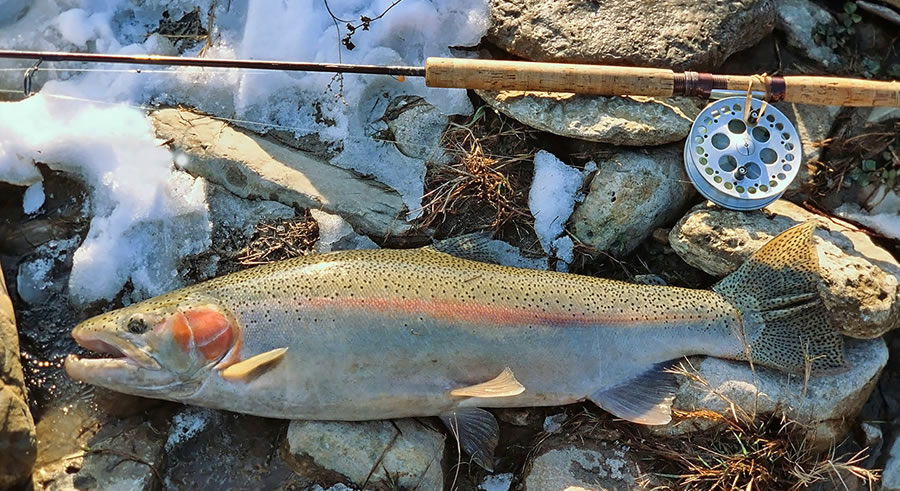 Forget about rising before dawn, since a few hours of sunshine can often make for better fishing in the afternoons.

Pay attention to that last note - most of the time. When steelhead face heavy fishing pressure, they will turn off egg sacks pretty quickly - especially after seeing an endless parade of them day after day. If there are a lot of other anglers out, it can pay to try other options.

Wax worms can be surprisingly effective baits in cold water, either fished on their own on a small, fine wire hook, or tipped on the end of a small jig head.

Simple garden worms can also be super-effective on spring steelhead, and especially after the warming spring sun has raised water temperatures into a more comfortable range.

Spring is also a good time to go artificial, drifting tiny crappie or perch jigs. The best ones are the little 1/64-ounce black marabous, but tiny tinsel jigs with a bit of white marabou also work well. Fish them under a tiny pencil float, like a Thill Smooth Stream, as you would fish an egg sack or a worm and you might be surprised at how effective they are.

No matter how you approach them, early spring steelheading is a lot of fun, it's often super-productive, and just what we need after a long winter of sitting in ice huts. Get out now while the action is at its peak, you'll be glad you did.