By Ken Mack - May 1, 2002
Control wins in NASCAR. The ability to draft and "trade paint" while jockeying for position. The dominance of one team over another.

Control is an underlying force that breeds success in everything we do, fishing included. We see it in skilled fly anglers as they strip line and precariously place poppers in the pads. In seasoned jiggers, as they deftly tick lead across rocks and timber without snagging, yet remain able to decipher the slight nip of a walleye. Surprising to some, though, might be the fact that control is equally as meaningful to a bobber fisherman. 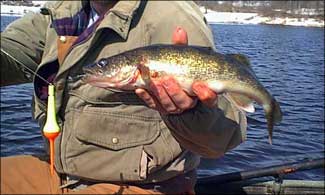 Control means hanging bait at a precise depth, as well as balancing a float to where the sniff of a bluegill makes it plunge. It’s taking a seemingly elementary bobber and building it into a system, a controlled system that can pry any species from any depth regardless of the time of year. And it all begins with End Weighting.

Fleshed to its core, end weighting is the combining of meat and mass. The hook and weight become one, yielding no mystery of depth or margin of error, but instead transferring control to the angler. It can be achieved in one of two ways: Firstly, the hook and weight can be married in the form of a jig. The hook is now the sinker. Both the float and jig linger endlessly in known and fixed positions.

End weighting is also achievable with split-shot sinkers pinched above a plain hook. The average bobber-user will span some 12 to 18 inches between sinkers and hook. The belief is that by allocating such a generous swim range that the bait is more likely to attract suitors. Not necessarily so. Struggling foodstuffs, especially minnows, will tire and eventually die from the stress. In end weighting, it’s wisest to lay only an inch or two between the hook and shot. As unlikely as it may seem, that allows plenty of scope for the bait to dance seductively, all the while maintaining constant depth.

Too many inches between the weight and bait also promote tangling. During the cast, the bobber, weight, and bait orbit at various speeds, ultimately colliding and weaving with one another.

Total control also involves knowledge of depth. The angler must know exactly where the offering is at all times. If the distance between the float and bait is adjusted to 5 feet, you’re assured the bait is 5 feet below the surface. No inconsistencies triggered by a rambunctious minnow or leech, as would occur with a non-end weighted presentation.

Absolute control concerns balance as well. Balance in the dominion of end weighting and float fishing is often referred to as neutral buoyancy. In essence, matching the weight and bait to the buoyancy properties of your bobber. The goal is to load the bait so the bobber scarcely stays afloat – it’s treading water but still visible. Consequently, even the gentlest bite causes the bobber to descend or at minimum skew from its natural position.

Control also entails the governing of vertical and horizontal space. Casting distance is your vehicle of horizontal exposure. Waters between you and where the bobber comes to rest constitute the horizontal plane. Vertical coverage area – column of water – is addressed by the float’s depth setting and your aptitude to jig. Yes, jig. First and foremost, a bobber is a strike indicator. It notifies the angler that something is going on below. But if end weighted and rigged as a slip bobber, a float also performs as a jigging platform. When line is pulled through the float – reeling or jerking – the bobber-stop slides up and away, consequently raising the presentation a corresponding distance. So if the bobber stop is jigged 3 feet and the float – jigging platform – remains in position, the lure then rises 3 feet, yielding greater vertical coverage. This principle allows you to explore an expanded vertical area, as well as draw fish by way of the lure’s action.

Truthfully, it’s as easy to pick apart a 6 foot deep weed flat as it is a 30 foot basin.

Let’s apply the concepts of end weighting and controlled bobber fishing to something tangible, say springtime crappies. Imagine that you’re attacking a shallow bay. The zone under scrutiny is a 6 foot deep stump filled area with newly emerging vegetation.

Your jig, bait – wax worms, minnow, or soft plastic – and float are composed to neutral buoyancy. Go ahead and set the bobber stop to 4 feet and cast beyond your targeted area. During the retrieve, mix slow reels, pauses, and a few tugs. Again, using the float as a jigging platform, make the jig rise 1 to 3 feet. The presentation ascends and falls in an attractive display, however remains under your complete control. Each cast probes a wide swath between you and where the bobber initially landed. Motor along and continue the process. When a strike occurs, the jigging platform reverts back into a strike indicator and beckons you to set the hook.

A similar scenario unfolds in the presence of walleyes. Suppose that you’re banging the deep transition area of an extended underwater point. You’ll need to upgrade jig size and make a move to minnows, crawlers or leeches. The top of the structure is 12 feet deep with a sharp break that bottoms-out at 20 feet. Set your bobber stop at 19 feet and hurl it onto the 12 foot crown. The bait will begin its quest on the bottom, where a walleye might vacuum it right up. But if not, crank down on the reel a few times. (Had a fish slurped the jig you’d feel its weight.) Continue to work the bait across the 12 foot area. Once off the apex and break, the float will right itself. The bait’s now hovering over a critical area. Let it sit awhile. She’s in a good spot and the live bait is laboring on your behalf. But if nothing filches it, drag the float slowly towards the boat, incorporating pauses along the way. On the following cast you’ll want to integrate a few jerks, raising the jig 1 to 3 feet above its fixed position. Control is with you. A walleye should soon be in the boat.

Choosing a suitable bobber is also important to building an end weighted system. The market place is flooded with slip-bobbers, many of which suffice, but none perform better than the Rocket Bobber. To maximize coverage of horizontal space, the Rocket Bobber is powerful for its size, casting like a surface to water missal. It can be end weighted and rigged as a slip-bobber without cutting the line, or clipped-on and fished traditionally. For end weighting, the large Rocket Bobber is designed to perform with a 1/8 ounce weight and the smaller version a 1/16 ounce weight. In clip-on mode, the Rocket Bobber – fishing for panfish with a light lure – is designed to lay flat on the water. When a fish inhales the bait, the bobber begins standing upright. Set the hook! Now that’s sensitive…

Float fishing needn’t be relegated to dock fishing and partygoers on pontoons. End weighting is a meaningful tool that matches wits with the most high-tech tactics on the water, and it’s easy to do as well.