By Jason Mitchell - January 22, 2021
Sticking a lively minnow in front of fish hasn't really changed a whole lot over time. With all the technology, sonar, map chips and other tools to help us catch fish... there are times each winter when we have to go back to the basics. The mantra lately has been a power fishing approach where we aggressively jig lures to break down water fast and try to contact the most aggressive fish. The opposite of that approach is sitting on key locations with a lot more of a patient and methodical approach with dead sticks. Note as well that aggressively jigging works extremely well in conjunction with dead sticks. Not every fish will have the same mood or temperament. Some fish want that more aggressive presentation. The fish that snub the aggressive presentation however will often make a mistake with the nearby dead stick. A classic one-two punch where aggressively jigging lures compliment the dead stick. There are also states or provinces where anglers can run several lines. In places where it is legal to use multiple rods, if you are going to sit somewhere... you might as well have as many lines in the water as you legally can. 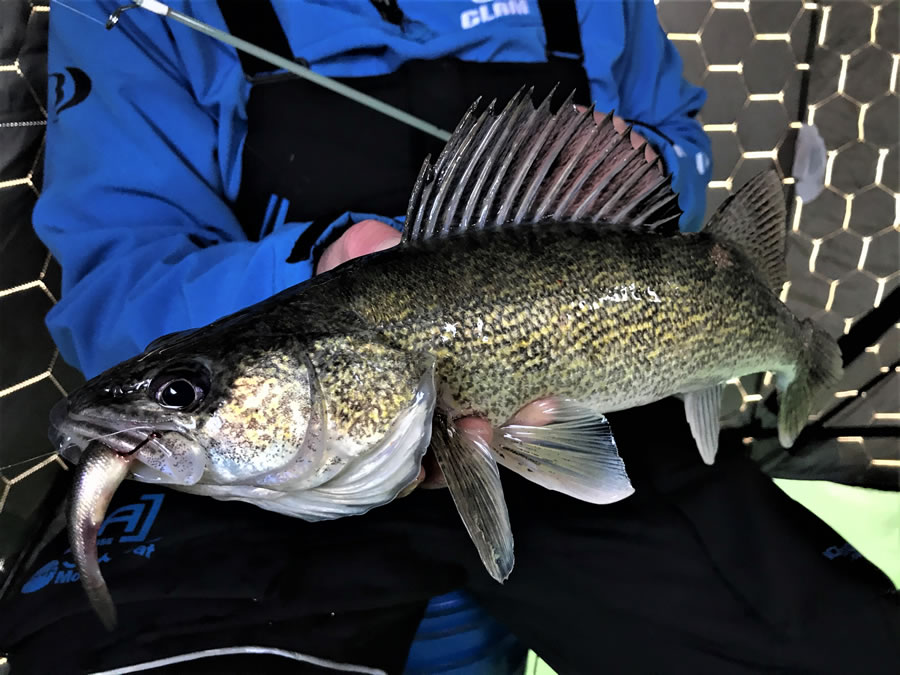 A simple plain hook and split shot is still one of the most productive ways to present a live minnow. For watching the action of the minnow and watching fish strikes, a 36- or 40-inch Dead Meat Rod is a perfect action for dead sticking walleye.
What is a dead stick? What is dead sticking? Just a term for a set line running a live minnow. Typically, this line just sits where you aren't physically holding the rod and the minnow is doing the work. Really simple and often a deadly presentation but there are many nuances to experiment with. As we get into mid to late winter, dead sticks often shine when the fish aren't as aggressive as what you typically see at early or late ice. Dead sticks also seem to shine whenever you have moderate to heavy fishing pressure or lower densities of fish. At the end of the day, a plain hook, split shot and lively minnow will catch fish when nothing else is working. So often when nothing is working well, we end up going back to the basics.

There are several effective ways to run a set line. You can use a tip up for example, or a rattle reel inside a fish house. You can use a slip bobber. My favorite way to run a dead stick is to simply use a longer soft tip rod and lay the rod on a bucket or some type of rod holder where I can watch the rod tip. A good dead stick rod will have a good stiff backbone for setting the hook and fighting a big fish but will also have a limber or soft tip that can dunk when a fish hits the minnow. This type of set up works best where you can both watch the rod tip while you fish and reach the rod quickly. You can watch the minnow work on the tip of a good dead stick rod and often when a walleye approaches, the minnow will start to get really active which you should be able to watch on the rod tip. If you are looking for a great dead stick rod for walleye, check out the longer 36 inch and 40-inch Jason Mitchell Dead Meat Rods. These rods are sold as both a rod and a combo that features a really solid spinning reel. I have typically used six- or eight-pound monofilament with dead stick rods but have started using a lot more six-pound fluorocarbon over the past couple of years when fishing in really clear water or deep water as the fluorocarbon doesn't have quite as much stretch as monofilament. If you are targeting big fish, you can increase to eight- or ten-pound test.

On the business end of the dead stick, keep things simple. A size four or six premium baitholder hook with just enough split shot to anchor the minnow is often all you need. At times, adding a little bit of flash or color works well so you can use a small jig or add a bead above a plain hook. A deadly jig hook for dead sticking is the Clam Blade Jig for adding a little bit of color, especially after dark when glow is a factor. I find that I often catch more fish by charging glow jigs after dark. On the toughest bites, a small jig often keeps the minnow from swimming up and away from the fish and the weight of the jig causes the minnow to just roll in one place. Another trick you can incorporate on tougher bites where fish won't separate from the bottom is to simply slide the split shot closer to the hook when using a plain hook so the minnow is pinned into a smaller area. If you need to keep the minnow in one spot, pinch off the tail. 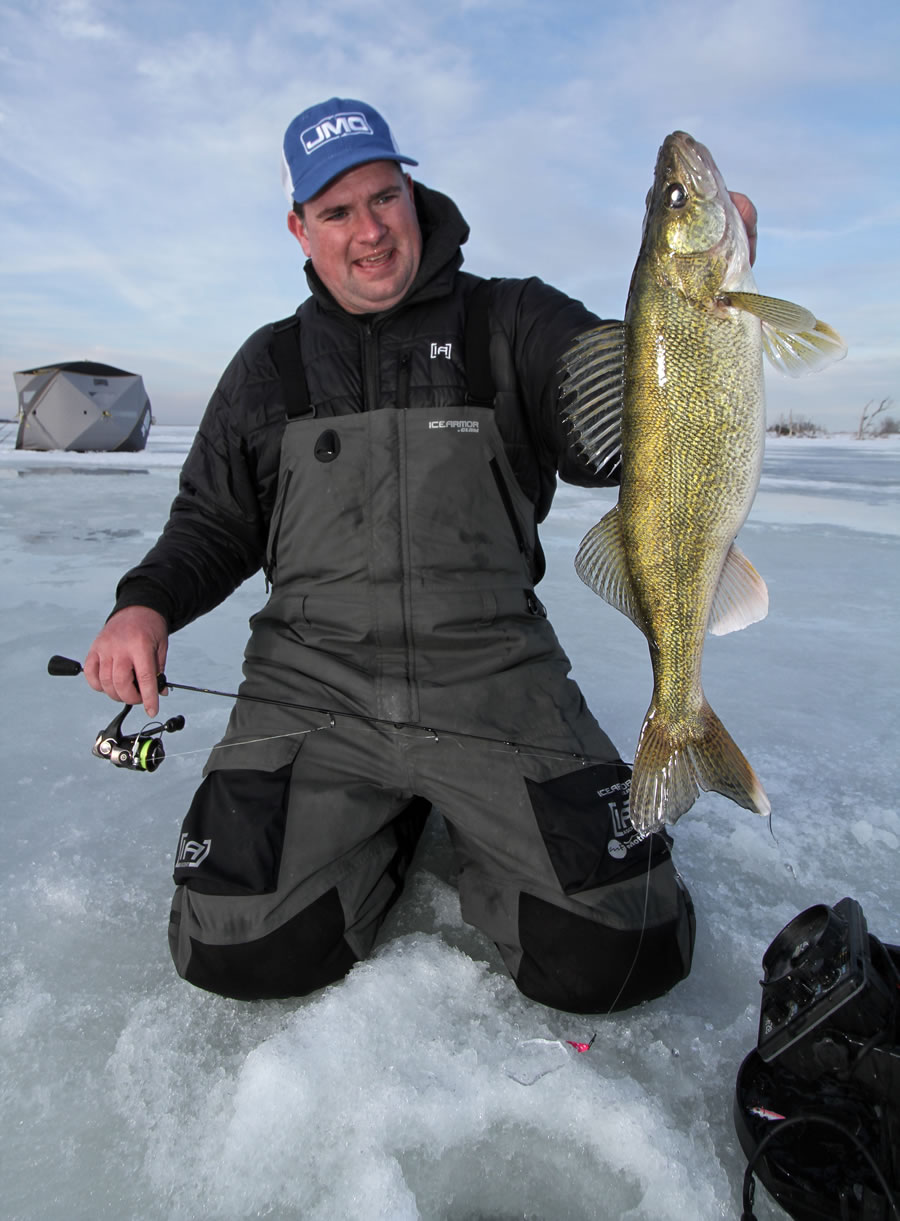 Dead sticks often compliment jigging lures. A classic one-two punch. Use a dead stick near where you are actively jigging to catch fish that aren't aggressive enough to hit the jigged lure. You will often attract fish below you by jigging and these negative fish will simply eat the easier nearby meal.
When running multiple dead stick rods, spread them out enough where you don't get tangled with other lines and just cover as much area as reasonable. On a tough bite where I have to run multiple dead sticks, I like to use a hub shelter just because there is so much more fishable area compared to a flip over shelter. I also like to use a hub shelter if I am specifically targeting big fish on big fish water because when you get a big fish on, you don't want that fish wrapping up on your partners line sitting and fishing right next to you less than four feet away.

How high off the bottom to fish can depend on the day and the water. Remember that placing the minnow higher off the bottom can often be seen from much further away and the aggressive fish or largest fish will often tend to lift up off the bottom. We have been on Great Lakes fisheries like Green Bay where we fished halfway down in the water column in thirty feet of water right off a sharp break where the adjacent flat was ten to fifteen feet. When fishing off sharp breaking structure, we often find that we are more successful hanging the minnows at the same depth as the adjacent nearby structure and catching fish as they slide off or on the flat over the deep water.

On other fisheries, we seldom fish higher than two or three feet off the bottom and there are many tough bites where the fish seem to be hugging the bottom and we are setting the minnow within six inches of the bottom. With multiple rods, don't be afraid to experiment with different heights off the bottom to see if there is a pattern.

You can also run dead sticks outside and a great tool is the Clam Arctic Warrior. The Arctic Warrior works in conjunction with your dead stick rod and is a metal tip down device that has a flag that pops up when a fish hit. These remote set line systems are very durable and simple. You can run the rod with the bail open or closed. When a fish hits the minnow, the rod will simply drop down towards the hole and the flag will pop up. You than simply grab the rod and set the hook. 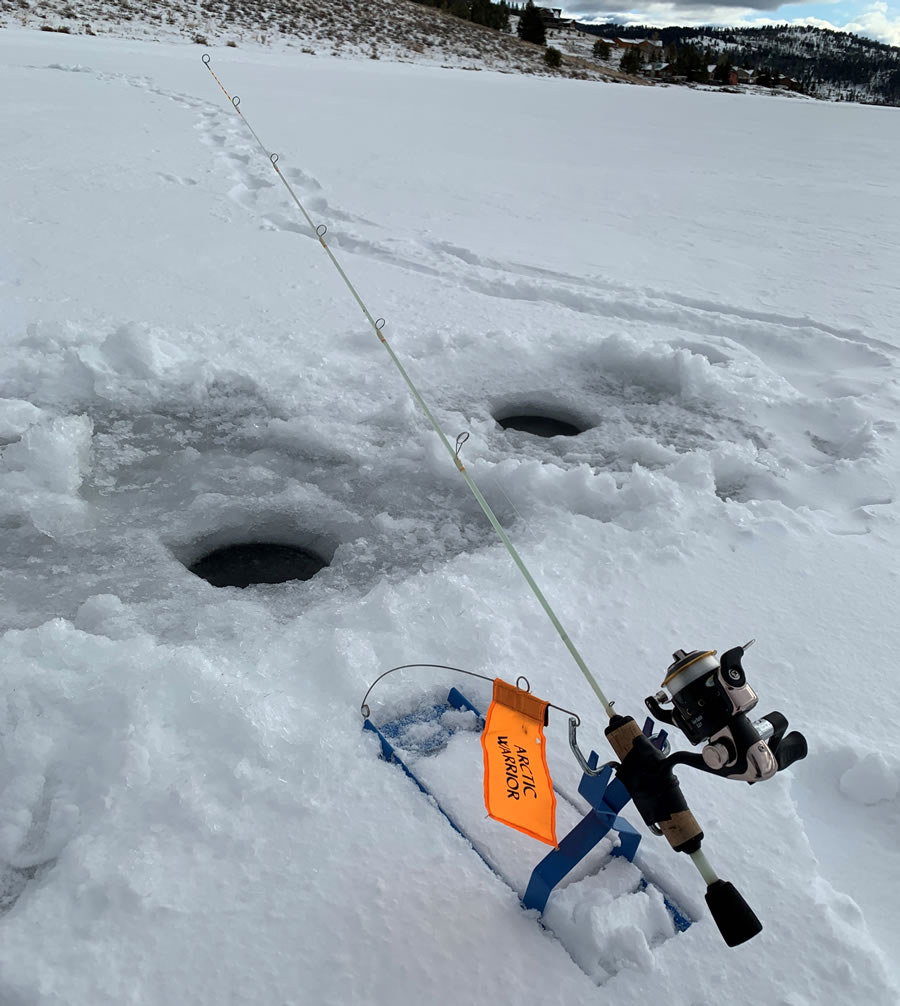 For running dead sticks out of reach in your general area (especially outside), the Clam Arctic Warrior is highly effective for notifying you of a bite without any unnecessary resistance.
The best minnow can really vary by lake and availability. Large fathead minnows are available almost everywhere and catch plenty of fish. Spottail or golden shiners can really be the ticket on some lakes and are probably the preferred minnow for set lines on many lakes for walleye. Rainbow Dace are also popular as they are robust. Chubs and small sucker minnows can also be deadly but when I have to use larger minnows like chubs and suckers, I find that I often do better by using tip ups.

With smaller minnows like a fathead, shiner or rainbow, I like to use a single hook and hook the minnow through the hide on the side of the minnow right behind the gill. This hook placement seems to give the minnow a lot of action and by positioning the hook close to the head, you can usually set the hook at the first sign of a bite. Whether you are using a dead stick rod or a slip bobber, lift the rod hard and high to set the hook and crank on the reel handle to set the hook. Don't swing with your wrist like you would with a lure.

Hub shelters work great for spreading out multiple lines when dead sticking walleye. On tough bites, dead sticks or set lines can often produce a lot of fish.
Dead sticking walleyes can just be so incredibly effective at times. When the bite gets tough especially, we often see a large percentage of fish coming off the set lines. Really simple, this presentation or tactic has been around for an awful long time. In fact, before we had the Vexilars, lure assortments and tools that we have today, we caught a lot of fish soaking minnows. To this day, there are many days when we must go back to dead sticks when the fish aren't aggressive enough or active enough to hit lures. What can also be common is that fish are attracted to jigging lures but eventually hit a dead stick. Don't overlook dead sticks this winter. 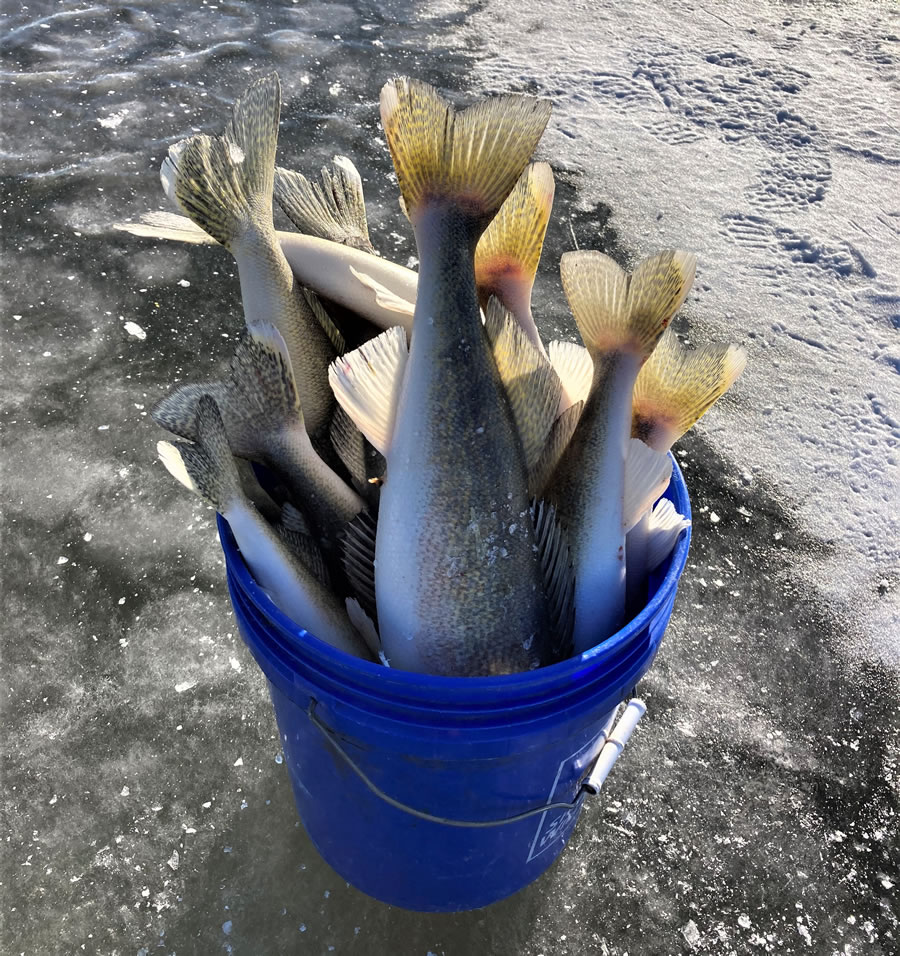 When nothing else is working, we often find that we can catch fish through midwinter by going back to the basics.