By Craig Ritchie - January 6, 2021
Winter is not my favorite fishing season, if I'm perfectly honest about it. I like to cast, and I like to fish in moving water, working with the currents and solving the challenges they always seem to present - things that are pretty difficult to do when the water is hard enough to walk on.

But one major exception to that is catching early winter crappie through the ice. That's a major joy, and one I do look forward to every year. There's enough of a challenge to keep my wandering mind engaged, and if you do everything right, you'll enjoy some of the fastest action of the year. 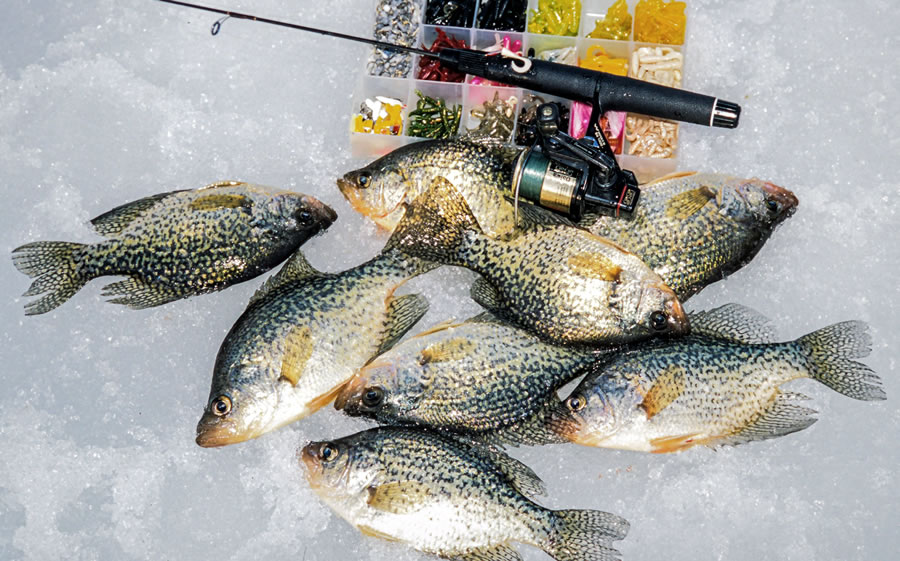 The big challenge with early winter crappie is finding them. Any successful early season crappie outing usually involves far more searching than catching, but the rewards make it all worthwhile. Once you do find them, you seem to find them all, and bites come as quickly as you get your offering back down the hole.

Under the first few weeks of ice cover, crappie gather around remaining stands of green weeds. With ice sealing the lake and eliminating the oxygenating effect of stiff fall winds, crappie will concentrate around vegetation which remains alive and giving off oxygen.

Note I said around remaining stands of green weeds and not directly in them. While you will definitely find some crappie right in the weeds, you're more likely to find numbers of small bluegill and the mid-sized pike that gorge on them. Larger crappie tend to suspend just offshore of the weeds in open water, close enough to enjoy the more oxygenated environment, but without facing the constant parade of two-foot pike.

I like to start by exploring spots that are likely to have the highest levels of dissolved oxygen, such as any bays with inflowing creeks or streams, or spots adjacent to the main lake basin, which would have been among the last to form safe ice. Water depth for these spots varies, depending on the size and type of waterbody you're fishing. In shallow rivers or small lakes, the green weeds might be found in depths of around 10 to 15 feet. On bigger, deeper waters, you could be into 25 feet or more. 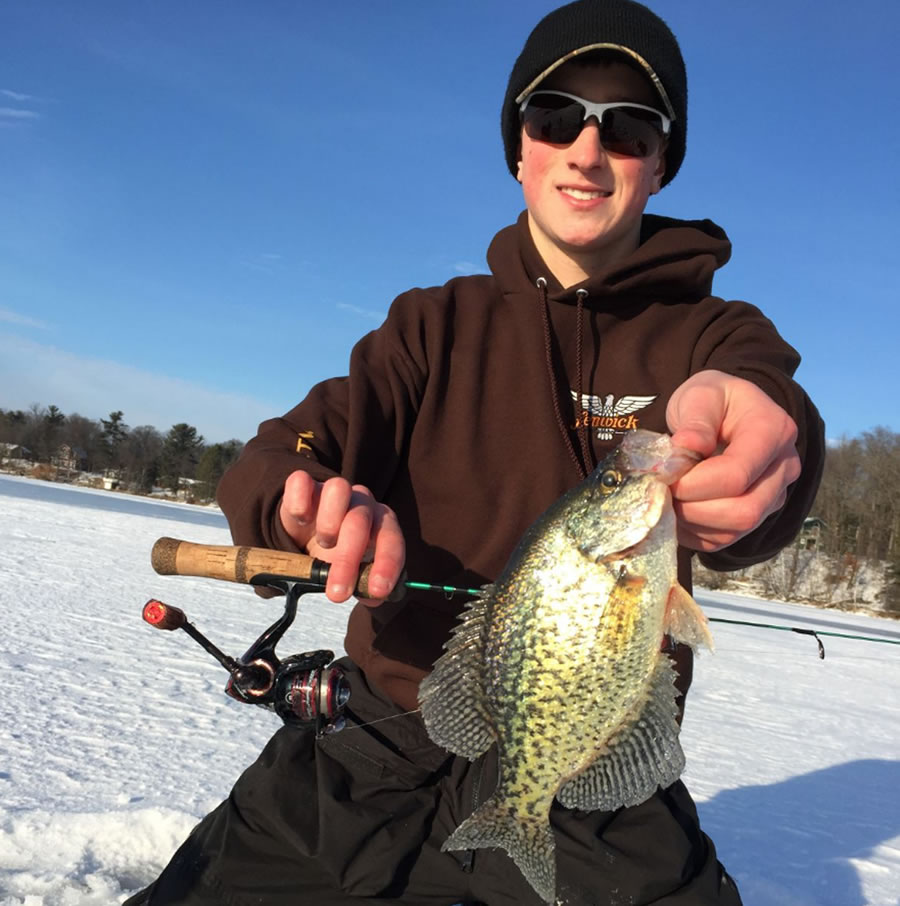 Once I've identified a couple of likely locations, I'll begin fishing by drilling a series of holes perpendicular from the shoreline, starting in perhaps 5 feet of water and working out to about 25 feet. A quick peek with sonar should reveal the presence of standing vegetation - once I spot some, I'll drop a jig down to bottom in the hopes of hooking some of it, so I can confirm it is indeed bright green and still alive, rather than dingy, dead, and absorbing oxygen rather than giving it off.

Once I've found crisp green weed, I'll spend several minutes fishing at various depths, from right under the ice to right on bottom. If I catch fish, then great - mission accomplished! But if I don't see action quickly, it's time to move on and try holes at increasingly greater depths and, if still no action results, some other spots elsewhere.

Finding early winter crappie is a matter of drilling lots of holes and putting in your time. But when you do find them, you really do seem to find them all.

The actual fishing is easy, as winter crappie tend to be extremely cooperative and eager to respond. Although I carry a couple of small boxes full of various ice fishing baits with me when I go crappie hunting, more often than not I catch all the fish I want on just a small, white, twist-tail grub.

Other anglers swear by simple marabou or hair jigs, and I can honestly see them being more productive over the long haul if only for the simple fact that they're more durable. You can get a hair jig back down the hole faster and catch more fish than if you have to continually replace torn plastic grub bodies. But really, anything you can vertically jig with will work. 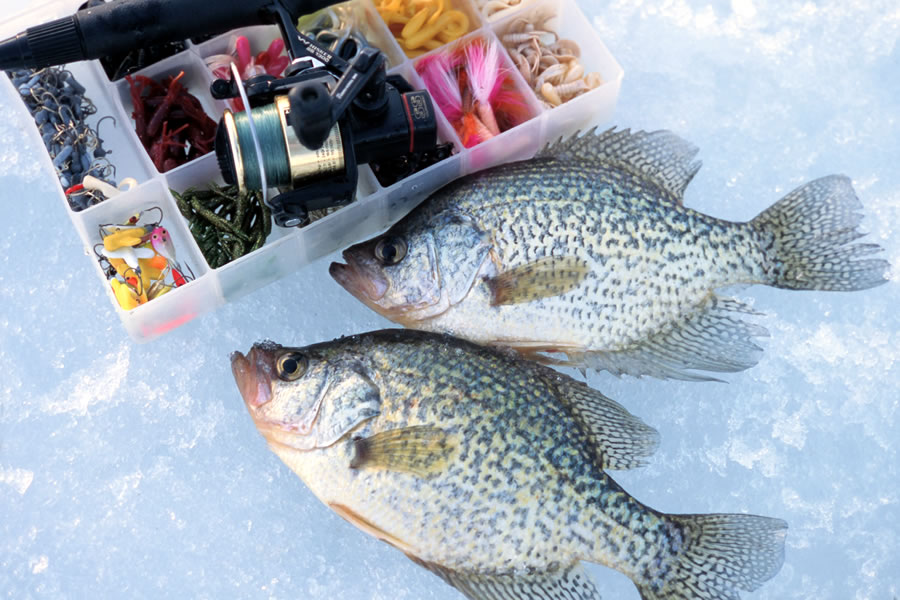 Live bait such as waxworms or minnows also work really well, but I find jigs tend to catch just as many fish, and are a lot less fuss to haul around. But use whatever gives you confidence. The fish don't seem to care one way or another.

If you're catching fish and then the action dies off, don't wait for them to come back. Immediately start drilling new holes parallel to the shoreline in either direction from your original spot. Crappie seldom move closer to or farther from the shore, they most often follow along it. If you're quick in drilling new holes once the action dies off, you can often find them again and bag a few more fish before they move off completely.

That kind of easy, fast fishing is a wonderful reward for the time and effort spent trying different spots. But the best reward of all comes later, when those delicious fillets come straight from the hot pan and onto your dinner plate.

Winter will never be my favorite season, but fast action with early ice crappie is always a sure way to warm up the coldest months of the year. Give it a try if you haven't already - you'll be glad you did.