By Bob Jensen - January 4, 2021
Avid ice angler John Crane and I talked on the phone recently. He has been doing a lot of ice fishing in his home area of north central Minnesota and on this particular day he had been after walleyes. After my usual questions of "wadja' catch" and "wadja catch'em on", the conversation got a little more in-depth. J.C. is one of those guys that really pays attention to detail. He takes a lot of factors into consideration. Following are some of the things that J.C. does that any angler can do to increase their success on the ice wherever they might be.

On this day, John was using mostly spoons and glide-baits for walleyes. Those styles of bait had been good to him on previous trips to this body of water, and although J.C. would have been quick to change to another presentation if the spoons and glide-baits had not been working, he felt they would be a good starting point. He was right. 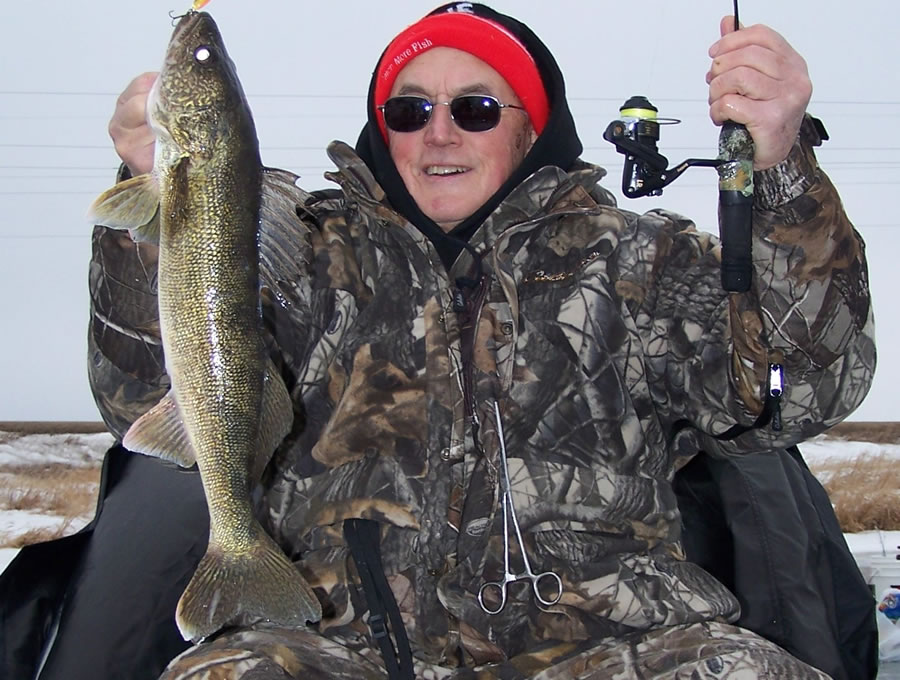 The Fishing Professor Jim McDonnell was an ice fishing innovator. This walleye ate a spoon at the end of Mac's ice rod.
The lake that John was fishing produces lots of walleyes, but true trophies don't happen very often. For this reason, rods with six or eight pound line were rigged up. If the lake being fished was home to good number of big walleyes, rods with eight or ten pound test line would have been employed. Most anglers don't have as many rods rigged as J.C. does. He said that day-in and day-out seven pound test is the way to go if you're just spooling up a rod or two for walleyes. He likes Dave Genz Legacy rods and well as Scepter rods. When fishing in a shelter, he goes with a medium action 28 inch rod. Outside he likes one a bit longer but still in medium action.

Here's a small detail but an important one: spoons will create line twist. To cut down on line twist many anglers attach the spoon to their line with a snap/swivel. J.C. suggests instead tying a small swivel into the line eighteen to twenty inches above the bait and then attaching the bait with a small snap. When the fish are finicky, less hardware is good. In fact, less hardware on your line is almost always preferred, but especially when the fish need to be coaxed into biting.

Chances are very good that J.C. will start with either a Tikka Mino, a glide-bait, or a spoon such as a Rattlin' Blade Spoon, a Leech Flutter Spoon, or a Pinhead Mino Spoon. There are lots of times when the walleyes will respond better to one over the other. Fish can get conditioned to certain baits and certain bait actions. If the hot bait has been an "XYZ Spoon", but the fish aren't hitting those today, try a "QRS Spoon". Different actions, colors, sizes, and styles will have a bearing on how many fish you catch.

"Pounding" the bait on the bottom will attract walleyes(and perch) to an area. They might be hungry, or they just might want to see what's stirring things up. J.C. has a constant eye on his FLX-28 sonar unit. He relies on it to show him what's going on around his bait. He is almost always tipping his bait with a minnow head. The scent from the minnow usually gets the fish to cooperate.

Whether you're new to ice fishing or are an old hand at it, these ideas will work from now until the end of the ice season.