By Steve Huber - April 1, 2002
OK, you've been fishing for a while now, happy with your spincasting reels and the spinning reels that you've been using lately, but with the long, lousy winter just about over, you're itching to go fishing.

So, you've been just about going through withdrawals, traveling to sport shows, talking to guides, tournament pro anglers and idly spinning all the shiny new reels that are at the displays. You've also been driving your spousal unit and yard apes nuts, watching fishing shows on end. One thing that you've noticed is that it seems that just about everyone on tv and at the shows uses a baitcasting rod and reel.

All right, you've decided, "This is the year of the baitcaster!" This is the year that "I'm gonna fish just like the pro's do!" Well, you've got a little money squirreled away and down the local X-Mart you go. Man, you never really realized how many different kinds of baitcasters there are, and how bloody expensive they are too! But "Oh well, the pro's all use them." You plop some cash down on a new reel, some line and home you go.

You take the spincasting reel off one of the rods that's standing in the corner of the garage, crank that fancy, shiny new reel in place and off to the back yard you go. Tying on an old practice plug, you smile, wind up and cast, expecting to see that plug fly off into the wild, blue yonder. You hear a strange sound, looking at the reel, you gaze in horror at the unexpected explosion of line that appeared on your reel! 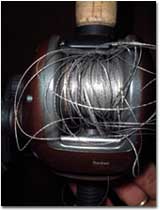 Muttering various obscenities under your breath, you pull, poke and eventually manage to free the line. You figure that, "Well, I haven't fished since last summer, I'm just a little rusty." While winding the kinked and twisted line back onto the reel, visions of confidently doing those neat little "flip casts" that you see on tv slowly fading from thought, you decide to "let 'er rip" one more time. This time, the practice plug does go flying off into the stratosphere just like you envisioned, the only problem is that the line is no longer attached to the plug! Once again, as you made the cast, you heard that dreaded "phhhhhhfffffffttttt, POW" sound, signaling a backlash of epic proportions! You stand there in disbelief as you hear the practice plug KABONG off the hood of the neighbor's car (the neighbor that lives 8 houses away) and in total disgust, the rod and reel go into the corner of the garage, forever immortalized as a new $59.95 work of modern art!

Some of you are laughing, some of you are nodding your heads, wondering if I was standing in the backyard the last time you decided to try a baitcaster, right? Others are saying "And that's why I DON'T use a baitcasting reel.

Well, I'm here to give those of you that are willing to try, some help. I know that it's "Not the Manly Thing To Do", asking directions (or worse yet, get caught reading the manual) but I can help, really!

There's a couple things that are consistent with everyone that says "I can't cast one of those, I've tried." Usually, the people that tell me that are trying to cast too light of a lure. I NEVER have a beginner cast anything less than 3/8 oz. and usually heavier than that. Lures that weigh 1/4 oz. or less are better off being cast with a spinning reel. The other thing that people don't realize is that they have to set the brakes and cast control on a baitcasting reel, and that it should be done whenever you switch lure weights. I love to give a little lesson to someone that "can't cast", when I have a properly set up reel. It's amazing how far these people cast, when they tell me that they can't!

First of all, before you even attempt that first cast, there are some things that you need to do. You need to set the brakes and casting control on the reel. Some reels have centrifugal brakes, others are magnetic, but they need to be set. 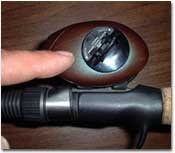 The example that I'm showing is a Shimano Curado CU-200 reel, but it is similar with all centrifugal braking reels. The brakes are under the left side plate of the reel, unscrew the left side plate and you'll see on the end of the spool, 6 little steel fingers radiating out from the center of the spool, like spokes on a wheel. On those little fingers are some little plastic doo-jobbers. Those little plastic gizmos are the centrifugal brakes. For now, carefully push one in, the next one out, alternating until all six brakes are set. Put the side cover back on and screw it in place.

Other reels came with different size weights in a tiny little plastic bag. Remember looking at the little plastic doo-jobbers in the box with the manual, wondering what those were? Now you know. There should be two sizes and colors of weights, put the largest ones on, replacing the lighter weight ones. But don't throw them away! As you practice and get better, you can put the lighter weights back on.

If your reel has magnetic braking, then the setting is easier to adjust. There will be a scale on the dial, usually from 1 to 10. Set the pointer on the brake control to 5.

Next thing to do, is find a half ounce practice plug. A lead bell sinker works well, just make sure that you're not going to be casting near anything breakable or worse yet, someone around to hit! A plastic or rubber practice plug works best, but still hurts if someone gets hit, so exercise caution when casting in the back yard.

OK, got the practice plug? Good, tie that puppy on and follow me again, this is pretty simple stuff.

Holding the rod horizontal, press the line release button (or thumb bar, depending on how the reel is equipped) and watch the practice plug as you take your thumb off the spool. You want to let the practice plug fall and hit the ground, watching to see what happens. If the plug falls like a stone, the spool will continue to spin once the plug hits the ground. Then, you've got a backlash. Hopefully, you stopped the spool with your thumb before the backlash got too bad! Well, pick out the backlash and wind up the line, pinching it between your finger and thumb, keeping tension on the line until it's all wound back on. 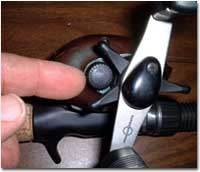 Now look at the handle side of the reel. Look under the cranking handle, you'll see a big star shaped thing, that's called the Star Drag. Now, look under the Star Drag, you'll see a little knob, that's the cast control, THAT'S the thingie that you're looking for. Turn it clockwise until it snugs up somewhat. Now, press the line release button again and let the plug fall. Nothing happens? Loosen the cast control a little bit and try it again. Keep doing this until the plug will slowly drop to the ground, and the spool stops rotating the instant the plug does make contact with the ground. Now you're set to try casting again.

With the reel set like this, you won't be setting any distance records, but you should be able to cast a reasonable distance without a backlash at all. The key to effortless baitcasting is practice, practice and guess what? More Practice! Continue to practice with the reel set this way, making sure NOT to cast into the wind if you can avoid this, that's a sure way to backlash as a newcomer to baitcasting. As you continue to practice, you should notice that your distance is getting better, and if you've been getting any better at all, you should begin to learn to stop the spool when the lure is just about where you want it. THAT's the beauty of baitcasting, the ability to place lures with pinpoint accuracy when you need it.

Now, it's just a matter of "educating" your thumb, learning to feather the spool when a backlash is imminent and place your lure with precision and accuracy. When you're really comfortable with a baitcaster, you'll be able to back the cast control all the way off and cast incredible distances, with the lure entering the water with minimal disturbance.

Once you become somewhat proficient with a baitcaster, you might find that you've become something like me. I do probably 90% of my fishing with baitcasting equipment, from walleyes to muskies and everything in between.

Well, you now know how to set the brakes and cast control and get started in baitcasting. So, get out there and practice! What are you doing sitting inside, c'mon, it's nice outside, get going!