October is a tough time for anglers in the Midwest, because it seems like it's prime time for absolutely everything. October is when smallmouth begin to gather in huge schools in deep water, packing on weight to get through a long hard winter. Walleye are also gorging like mad as they too try to pack on some extra weight before winter sets in. Muskies have returned to comparatively shallow water for their own last-ditch feeding spree, and there may be no better time to load up on a haul of prime crappies and perch for the freezer. And that's all without even talking about duck hunting.

In spite of all these incredible distractions, I still make time every October to fish for brown trout. The fishing is super easy, the action can be furious, the scenery is incredible and if you want an honest shot at a fish pushing 20 pounds, then this is your best shot.

Brown trout have been widely stocked across the Great Lakes basin, often in huge numbers. Fall is spawning season for them, and it is cool October nights and scattered fall rains which entice the fish to leave the big water and venture up tributary rivers flowing into the Great Lakes. With normal seasonal weather patterns, most of the fish won't actually begin spawning till around Halloween, giving them a couple of weeks to settle in and plump up by gorging on a novel food source - salmon eggs.

Brown trout enter the tributary rivers just as spawning activity for chinook salmon is at its peak. Where the shallow riffles tend to be loaded with bedding salmon, the browns hang out just downstream of them, in deeper runs and the upstream ends of pools, where they hold right on the bottom. There, they can lazily gorge on the constant stream of eggs drifting down in the current. For the browns, it's like parking themselves at the end of a conveyor belt that keeps bringing a non-stop parade of food. Since they're also getting ready to spawn, they're happy for the extra calories.

Logic would say that the best approach to catching these fish would be to use salmon eggs as bait, and thousands of anglers do just that. Personally, I don't bother - I save the roe for steelhead fishing later in the season, and fish with flies instead. 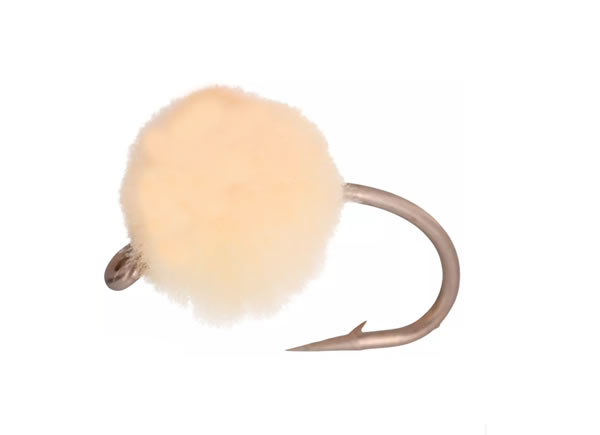 Egg flies have a number of advantages over real eggs. They're inexpensive and easy. Just tie on and go to it.
Brown trout that are holding in moving water don't have very long to inspect what appears to be an egg drifting downstream in the current. They see it and immediately have to make a decision - eat it, or let a tasty tidbit get away. Their decision to hit is based entirely on visual clues, so the scent and texture of real eggs - factors which make all the difference when fishing in slow, cold water later in the year - are completely lost on these fish. That being the case, I save the real stuff for later, and use egg flies to tease the browns right now.

Egg flies have a number of advantages over real eggs in situations like this. For starters they're far less expensive, and even if you cure your own roe, they're easy - there's no need to thaw bait or prep anything before you head out. You just tie on the fly and go to it. You don't have to worry about the egg sack milking out and needing to be replaced constantly as you fish, nor do you need to worry about smelling like a hatchery truck when you go home. Best of all, egg flies - normally made of yarn - are more buoyant than real eggs, so they tend to get hung up on bottom rocks far less frequently.

If you're not a big fan of fly fishing, then soft plastic rubber eggs fished on a small single hook will also work just great. Or, if you want to try something more novel, pick up a big bag of gummy bears next time you're in the supermarket. The yellow and orange ones - torn into egg-sized pieces with a thumbnail - work great. And, you can snack on them as well if you get hungry.

The actual fishing is about as simple as it gets - walk along the river bank until you see some spawning salmon, then being careful to not alarm them, work your way into a position where you can fish immediately downstream of them to catch the browns gorging on stray eggs. You'll want to focus your efforts on the first bits of stream bed that are just deep enough that you can't quite see bottom - that's where the most active and aggressive fish will be.

The idea is to cast across the stream so your offering lands a bit upstream of you. Let it drift downstream through the target area, they retrieve and repeat. You want to be near the bottom, so you're going to need to use one or more split shot sinkers a foot or two up the line to help you get down there. But you don't want to be hanging up constantly, so it might take a bit of experimenting to find the right amount of weight. The idea is to feel the weight briefly tap bottom every couple of feet as it drifts along.

If you've worked your way into position quietly and got the weight just right, then it shouldn't take long before you feel that adrenaline-rush tap on the end of the line and find yourself fast to a chunky brown trout.

If you've never tried fishing for October browns, then you're really missing out. Give it a whirl this fall, and you might just find it as addictive as I do. 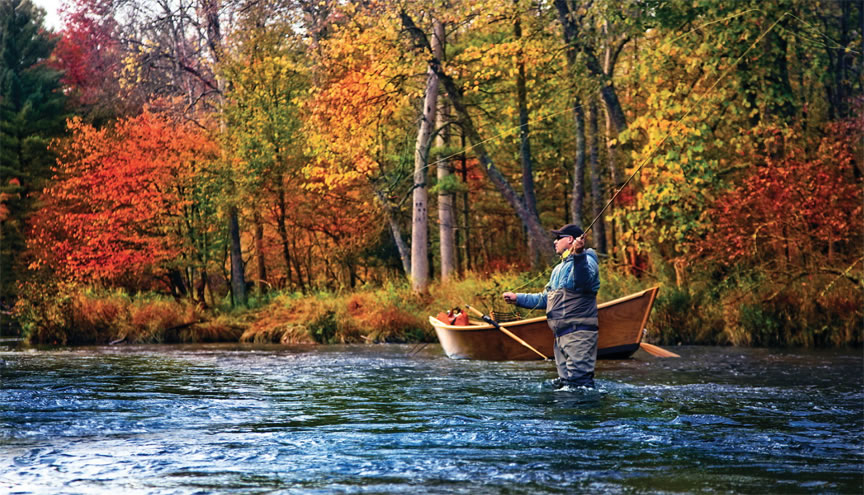