By Jason Halfen - October 8, 2020
The cooling waters of October draw large numbers of walleye into the shallows to feast on bountiful baitfish in advance of winter's arrival. One of the most enjoyable and productive ways to target these toothy predators is by trolling shallow-running crankbaits under the light of the moon. Here are three tips to help you put more moonlit walleye in the boat this season.

Day in and day out, my favorite fall walleye trolling runs have some sort of weedy cover nearby. Lush summer weedbeds die back in the fall, making it easy for marauding walleye to slide into the weeds and pick off perch, shiners, and other baitfish trying to hide there. Focus on weed edges; frequently, the outside, deep weed edge is the most productive, but often, the inside edge can be even better, as fishing pressure tends to be focused elsewhere. As long as there are some green weeds present, walleyes will be there too. As the water cools dramatically later in the fall, decaying weedbeds become less important than rocky shorelines and points. 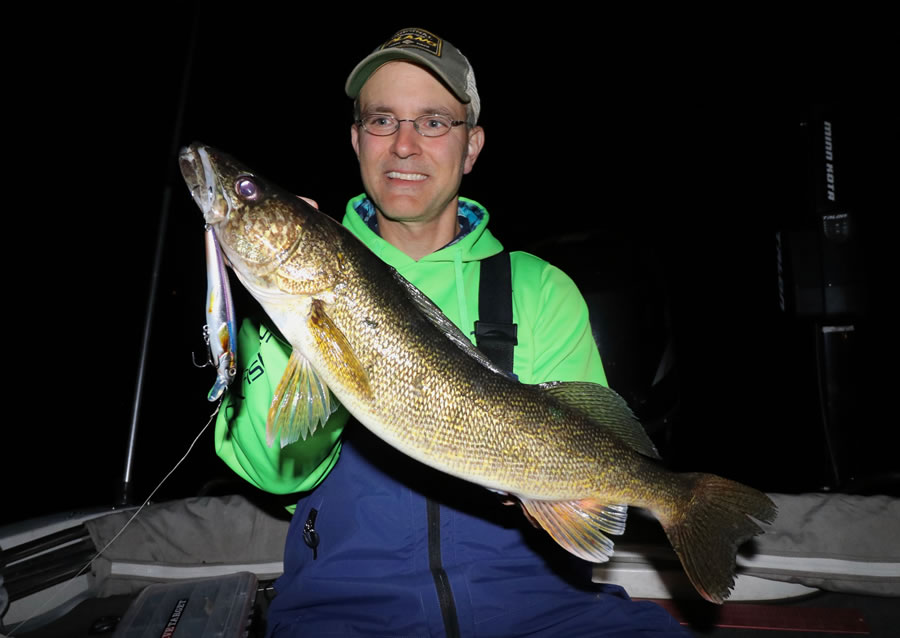 I choose trolling lures based on water temperature. Early in the fall - when water temps are in the 60s - shad-bodied lures are the most important tools in my toolbox. This might include a simple #5 Rapala Shad Rap trolled along an outside weed edge. During prime time - when the water is in the 50s - I like to pull larger, shallow-running shad baits, like a #7 or even #9 Shallow Shad Rap. Later in the fall, when the water is in the quite cold 40s - minnow style baits, like a #9 Scatter Rap Minnow or even a #11 Original Floating Minnow, rule the roost.

Quiet propulsion in shallow water, either from a smooth EFI kicker motor or a powerful bow-mount electric trolling motor, is the key to moonlit walleye success. Since the water is cool - and getting colder by the day - it's important to pull baits at a speed that correlates with the water's temperature. Early in the fall, you can get away with trolling those Shad Raps at speeds close to 2 mph. However, trolling speeds should fall into the 1.6 to 1.8 mph range as soon as the water cools into the low 60s. Late in the season, when most anglers have winterized their boats and headed for their deer stands, productive trolling speeds are typically 1.4 mph or even less.

Fall is prime time for walleyes. Plug in those navigation lights, strap on your lifejacket and grab a thermos of hot coffee, because it's time to chase Walter under the light of the October moon!