By Bob Jensen - September 28, 2020
In the autumn season, fishing can be good. Really good. Fish instinctively know that colder water will be arriving soon. Their metabolism will slow down and they won't be eating as much. They need to rely on stored energy to keep them going during the next few months of cold water, so they eat a lot in preparation of that cold water. However, as willing to eat as they might be, there are still some small things that anglers can do to convince even more fish to eat. Following are some of those things...

A few years ago a friend and I were fishing a small lake that was noted for its largemouth population. This was mid-autumn when the bass are usually on the deep weedline. The day was warm for that time of year and overcast. We were throwing crankbaits on the deep weedlines and catching a few bass, but not as many as we thought we should. We came upon a patch of reeds that were very close to the weedline in the deeper water. We decided to give them a try. We tied on spinnerbaits and started casting into the reeds. Right away we started to catch bass. My friend, being the curious sort, tied on a spinnerbait with a much larger blade than the ones we were using. He continued to catch lots of bass, but they were noticeably larger than the ones that we had been catching. Then he added a plastic trailer to his spinnerbait, making it appear much larger. He continued to have very good action, and the bass were now averaging even bigger. At some point I caught on to what he had done and switched to a larger bladed spinnerbait with a trailer and my size average went up also. Small details, but very important ones. 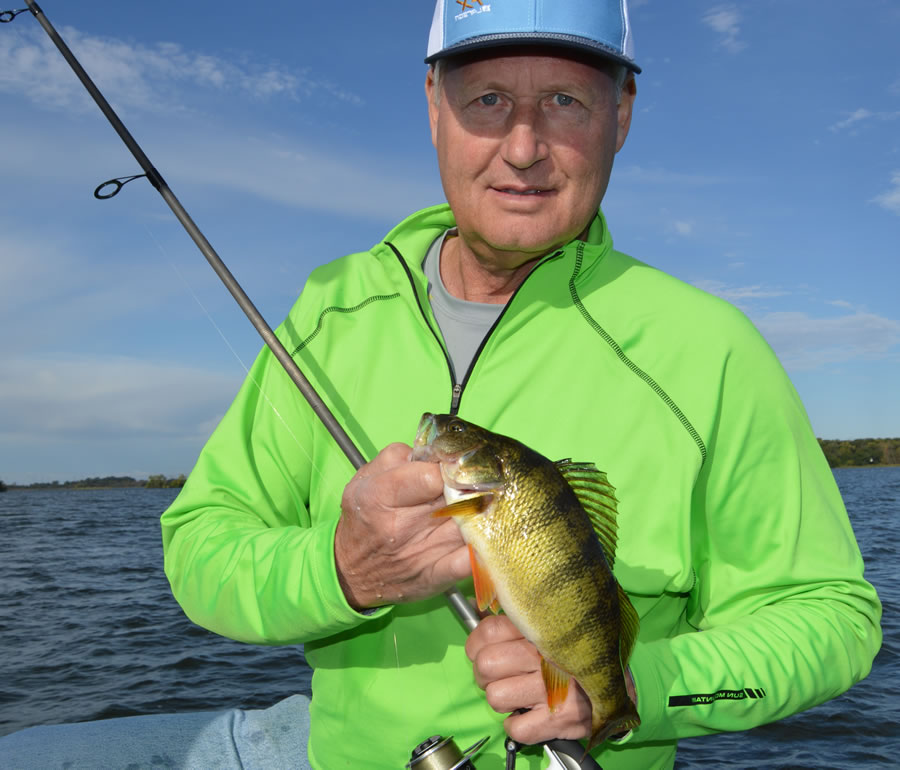 Gary Swenson with a nice fall perch. A jig/minnow combination took lots of perch, but the jig/Shadpole took the bigger ones on this day.
The next day we went to a different lake and found that, on this lake, the bass were in fact on the deep weedline. We were throwing crankbaits. Back then, we didn't have as many crankbait choices to choose from. We were throwing traditional fat, short, bass-style crankbaits and were catching a bass every now and then. We decided, just for the heck of it, to try walleye-shaped crankbaits: Longer, thinner in shape. These baits had a slower wobble, and in that cold water, that slower wobble was what the bass wanted. A small detail, but one that made a difference.

On another October day we were fishing walleyes on a large body of water. The wind had been blowing from the same direction for several days. This caused the walleyes to stack up on the windblown side of points in shallow water. Much of the time we were fishing water less than 4 feet in depth. The walleyes were liking eighth ounce jigs tipped with minnows. However, the rocky bottom was eating a good number of our jigs. We switched to sixteenth ounce jigs also tipped with minnows. That's when the bite really took off. We caught a lot more fish and lost a lot fewer jigs. This wasn't a big fish lake or technique, but we really enjoyed that afternoon catching lots of 15 to 18 inch walleyes.

Last fall some friends and I got on a good perch bite. Again, small jigs and small minnows were what we expected them to be eating. And they were. Then one of the non-conformists in our group threaded a Mr. Crappie Shadpole plastic bait onto his jig instead of a minnow. This presentation appeared a bit larger than the jig/minnow combo and appealed to the larger perch. Again, just one of those things a little out of the ordinary that appealed to bigger fish.