By Bob Jensen - September 15, 2020
Boy oh boy oh boy, summer of 2020 is already starting to exit. There are lots more butterflies on the bushes, birds are gathering, and football practice has started. And many anglers are spooling up with fresh line to prepare for fall fishing. I've often said that June and October are my favorite months for fishing. June 2020 is in the past, October 2020 is in the near future. Following are some things that I've experienced in autumns past that will help anglers catch more fish in autumns future.

In the 80's I had the good fortune to work at a fishing school in Walker Minnesota called Camp Fish. Camp Fish hosted what they called "Camp Fish Celebrity Jamborees". These Jamborees were 2-3 days of hard-core fishing. Anglers visited Camp and were taken fishing by notable guides, fishing celebrities, and tournament anglers. The Jamborees were fund-raisers and were held in the fall for several reasons, with one of those reasons being the fishing for a variety of fish species was best and most consistent then. On one memorable day my boat partners and I caught dozens of largemouth bass using crankbaits along deep weedlines and on spinnerbaits in shallow rushes in the morning. In the afternoon we moved to a different lake and caught a bunch of walleyes on jigs in a narrow area between lakes. We would have been very challenged to have that much diversity with that much success at any other time of year. 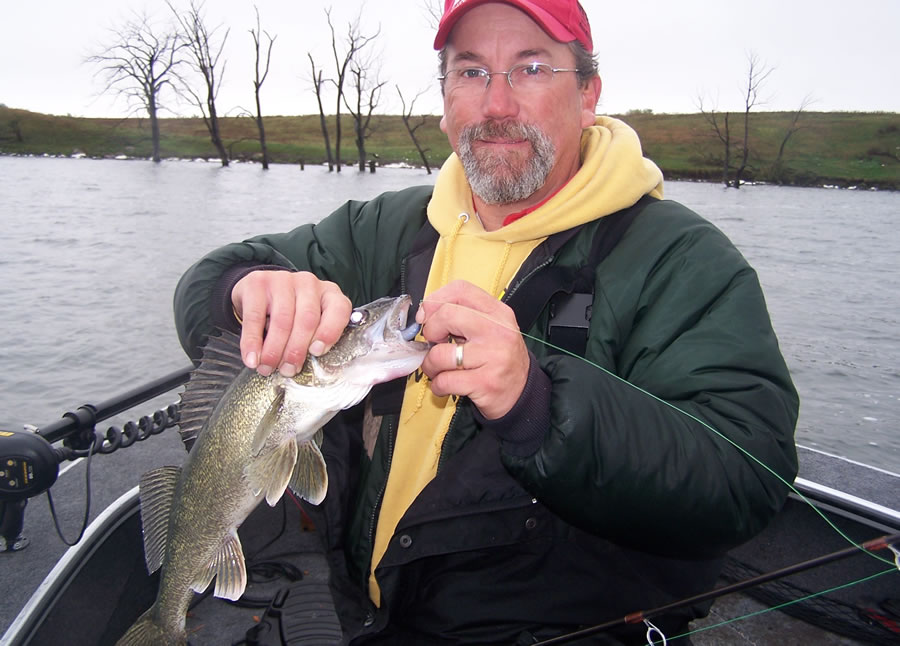 Our fishing friend and outstanding fishing guide Joe Honer with a shallow water fall walleye.
In the fall, fish want to eat. They instinctively know that things are changing and they need to fatten up. They'll be wherever the food is. I recall a sunshiny October afternoon when we caught walleyes in 2 feet of water. They were on a wind-blown point that had attracted baitfish. Typically walleyes aren't that shallow when the sun is bright, but fall is different. The sun isn't as directly overhead in most of walleye country, and wind will diminish the negative effect of sunlight to some extent. And the presence of food in the fall will really encourage fish to participate in the catching part of fishing. Casting 1/16th ounce jigs to hungry walleyes in 2 feet of water is fun.

I remember fishing for muskies with my friend Don Pursch on Leech Lake one autumn afternoon a good number of years ago. We had been fishing for several hours with minimal action. I was ready to call it a day, but Don said that a "major" was coming soon. The "major" was a major solunar period, and some anglers pay a lot of attention to these. Perhaps more anglers should pay attention to them. Don wanted to be on his best spot when the "major" arrived. We were, and so were the muskies. In just a couple of hours we saw and hooked more fish than we had in the previous several hours. Some very successful anglers believe that major solunar periods have the most impact on fish in the fall months.

Last thing. Smallmouth bass gather more than usual in the fall. Just a couple of years ago Mike Frisch and I joined Tim Snyder on Kabetogama Lake in northern Minnesota. Tim told us that the smallmouth fishing can be very, very good in the fall. Some fisher-people exaggerate: Tim wasn't. We caught smallmouth after smallmouth on jigs and dropshot rigs tipped with KVD Dream Shot and Half Shell plastics. Absolutely the best smallmouth action that I've ever experienced, for quality and quantity. Spend time looking for the concentrations of fish in the fall and chances are they'll bite.