By Bob Jensen - August 6, 2020
The summer of 2020 is starting to wind down. Lots of anglers, in many places more than usual, are on the water in search of a fish that wants to eat the bait that's on the end of our line. Baitfish populations are at or near the highest levels of the year. A good number of those baitfish were spawned this spring and are of a size that the larger predator fish can prey on. With baitfish levels high, it can be difficult at times to get those predators interested in our baits.

Additionally, light penetration is high at this time of year. On bright days when the wind doesn't blow very much, many gamefish do what they can to avoid light. Many of them burrow into weed cover and only venture out when they get hungry. Others go deep and stay deep until the sun isn't as intense. However, it's summer, the water is warm, and a fish's metabolism is high. They've got to eat sometime, and if we show them the right thing the right way, they'll eat it.

For the next several weeks, we're going to be targeting fish. Any fish. As autumn gets closer we start targeting big fish, but now, day in and day out, we just want to get bit. Crappies, walleyes, bass, pike, they're all fun and we just want to get a few to bite. When we're looking for big fish, we're probably going to be using big baits. Now, when we're not as concerned about the species or the size, smaller baits will be the way to go. 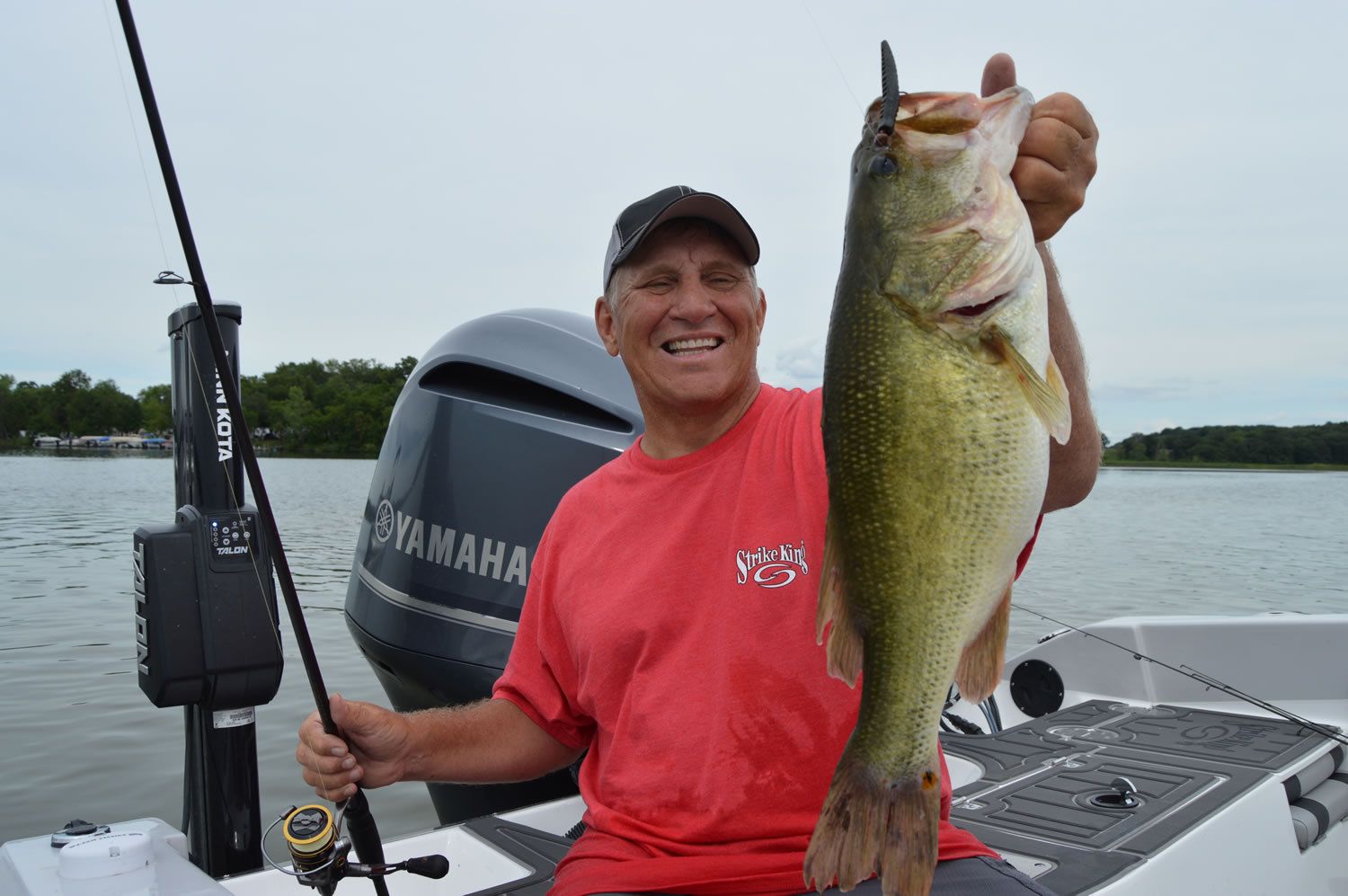 This big largemouth went for a 2.5 inch Ned Ocho. That's not unusual when the fish are finicky.
Much of our fishing will be on the deep weedline. In lakes with stained water the deep weedline might be in seven or eight feet of water. In clearer lakes, the weedline could be twelve to fifteen feet deep, and even deeper in super-clear lakes. The deep weedline is kind of a highway for fish: They travel along it and school on points, pockets, or any irregularity in the weedline. We'll be mostly casting a jig/live-bait combination or a jig/plastic combination. Many anglers like the jig/live-bait deal, but more and more, jig/plastics are seeing additional water-time.

Minnows, leeches, and nightcrawlers come in pretty much one shape and one color and they require care. Plastics come in unlimited shapes and colors and keeping them in fish-catching condition is no problem. Plastics allow unlimited presentation options.

Jig weight is an important consideration. When a slow fall is desired, such as when you suspect the fish to be suspended along the deep weedline, which is what largemouth bass and crappies will do on overcast days, a sixteenth ounce head with a bulky plastic will allow for a slower fall. Your bait will stay in the fish zone longer. Six pound line enables an angler to cast lightweight jigs better, but eight or ten pound line has a larger diameter and will make the bait sink slower.

If you're after walleyes or the sun is shining and there's none or not much wind, the fish will probably be deeper. An eighth or three-sixteenth's ounce jig will be better. It will get down to the fish quicker.

The finickier the fish, the smaller the plastic. If they're really shut off the 2.5 inch Ned Ocho is good and will appeal to most species of fish. If they're aggressive, start with a 5 inch Ocho and increase the size until they quit biting. Use the largest size they'll take, but realize that if they're finicky, small will be better much of the time.

Summer is getting short, but the fish aren't. If you give them what they want, they'll eat it. When fishing is slow, a small bait will often speed it up.