Speed Up For More Summer Fish!

By Mike Frisch - July 23, 2020
Spring is a time when shallow fish and cold water often mean methodical presentations designed to tempt fish that may be a bit lethargic into biting. During summer, however, faster presentations that trigger aggressive, reactionary strikes are often more effective.

For example, walleye fishing in the spring often involves pitching or slowly trolling or drifting jig and minnow combinations in the shallow to mid-depth water ranges. Some anglers also use slip-bobbers cast to likely walleye-holding spots and allowed to "soak" in place. In essence, jigs baited with tantalizing leeches or minnows are suspended below bobbers in the faces of finicky walleyes, tempting (hopefully) those fish to bite.

These slow "in your face" jigging and bobbering techniques are great for spring and cool water. Summer's warmer water and increased baitfish populations often mean that faster presentations, not only are often more effective, but might just be required, to put together a good walleye catch! 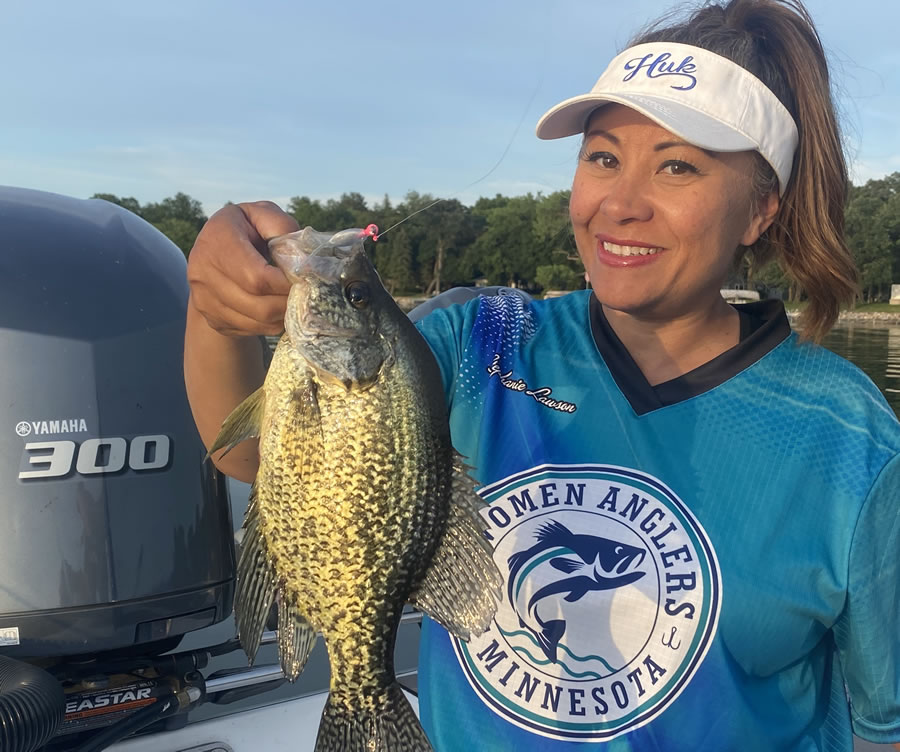 Stephanie Lawson, Vice President of Women Anglers of Minnesota, with a summer crappie that fell for a cast and retrieve approach!
On a recent guide trip, for example, we located a large number of walleyes roaming a soft bottomed flat. Some anglers were trying to "sit" on those fish and tempt them with traditional jigging presentations, while others were slowly trolling "Lindy Rig" style slip-sinker rigs baited with leeches and nightcrawlers.

Both of those presentations produced an occasional fish, but we found pulling leeches and nightcrawlers on "slow death" rigs behind bottom bouncers at 1.3 mph was more effective. Not only were we able to put our baits in front of more fish because of our increased fishing speed, but it appeared that the spinning action of the leech or 'crawler pulled quickly by the fish was triggering them to react and bite before the bait "got away!"

Speedy presentations like those bottom bouncer rigs often shine for walleyes in summer, but quicker presentations work on summer panfish as well.

Crappie anglers in the spring will often use similar tactics bobbering tactics as their walleye fishing brethren. A small panfish jig fished alone or tipped with a crappie minnow or waxworm and fished below a bobber is a favored springtime presentation that tempts lots of crappies and bluegills into biting.

In the summer, on the other hand, speeding up can again be key. Wally Marshall, aka Mr. Crappie, and I shared a boat earlier this summer chasing his namesake species. Rather than fish "itty, bitty tubes" (as Marshall called them) below the boat, we cast and slowly retrieved small, plastic action-tail baits.

While a slow retrieve was key, we were still covering water to maximize our chances for putting our baits in front of lots of fish. And, the swimming, squiggling action of the Mr. Crappie ShadPole and Shadalicious baits we were casting was much too tempting for a bunch of summer crappies to resist.

If tempting a bunch of summer fish into biting is one of your goals yet this summer, consider speeding up your fishing approach using some of the techniques described. You'll cover more water to find fish and probably trigger a bunch of them into biting as well!

As always, good luck on the water and remember to include a youngster in your next outdoors adventure.